Marvel
by Ryno
October 07, 2007
MarvelousNews.com DATABASE is updated today with the brand new Spider-Man Trilogy - Sandman Series, Click the image below for an extensive look at this new wave of 6" Spider-Man figures from Hasbro. 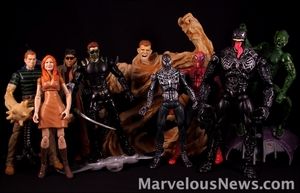 The ad for the figures says the BAF Sandman is from the beginning when he was caught in the particle accelarator and not from the end when he was huge.

Sandman.... confuses me. hes well sculpted, but shorter then I think he was in the movie.... and the articulation is all off... its weird.

they both are. the normal figure because he was about a head taller than spider-man in the film, and the BAF because during the big battle at the end, he was around three stories tall. aka, not the same frakin size as venom. bad hasbro!

Venom is ok. Hes not as cool as everyone has been saying he is. In fact I FREAKING HATE his ankles. that little ball thing going, wtf??

I mean it can be fixed, easily with a dremmel in fact, but still. ewww.

I kinda want Doc Ock these days. his figure is probably the best redone rerelease out of the ones that were rereleased (probably even better then [both] sandman and even the Black Spidey).

the ONLY thing I see wrong with the new Ock is lack of waist twist and immobile bottom tentacles. but that can be fixed with switching out the ones from the bendy tentacle Doc Ock with these....

MJ would be a better figure if Hasbro put some effort on the paint. At least paint her eyes better.

Sandman is pretty bad. I think the 5" ver. looks better.

And for New Goblin, if the 5" can include a removable mask, why not the 6".

I.... am pleased with MJ. I was surprised at how good this figure actually is.

Sandman.... confuses me. hes well sculpted, but shorter then I think he was in the movie.... and the articulation is all off... its weird.

the BAF is still on the fence as far as I am concerned. I can't wait to get Venom..... eah. kinda.

I'm liking that Venom. He's actually pretty big, bigger than Spidey. I'll also be looking for him and maybe Black spidey but not sure what I'm gonna do with the BAF parts. Will there be anyone that's interested in the BAF Sandman?

Thanks for the pics, Ryno.

Great work and thanks for the pics! Hope you managed to get some sleep after the pic-snapping marathon!

Liking that Venom so I'm definitely going to be on the lookout for him. Sandman is just not doing anything for me, the figure nor the BAF. @grumpy@

wow,mj looks great in those pictures,maybe its just that the lighting is bad in previous photos.