Marvel
by Jay Cochran
June 03, 2004
John from Action-HQ sends word of the following: 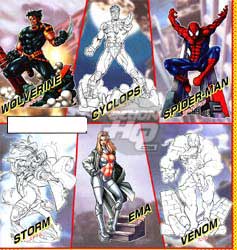 Many of you collectors out there are familiar with the onslaught of the semi-articulated yet highly detailed 3-4 inch capsule figures coming out of Japan in recent years. Now it seems like you can't avoid them as almost every Japanese Anime and action hero property has been immortalized by this line of toys produced by Bandai Japan and Yujin, just to name the two largest producers.

It seems that the Japanese cannot get enough of these cute small figures which are great to collect and display. They do posses certain advantages over the larger normal 6 inch type of figures. They take less room yet still offer an almost equivalent level of detail. In fact, the details are often so fine that they almost compare to McFarlane figures; case in point, the current Ultraman monsters capsule sets. What's more, they are expectedly less expensive, averaging $17-50 per set depending on the number of figures and the complexity of the production. Either way, you are looking at close to 30-50% less than the average 6 inch figure out there.

Now, US collectors will get a chance to experience these 3-4 inch figures first-hand with the scheduled September 2004 release from Bandai Japan of Spiderman VS X-men capsule set. Though only released in Japan, we are sure that many of you collectors out there will want of set.

There will be 6 figures featuring Spiderman, Venom, Wolverine, Cyclops, Storm and Ema. Judging by the photos we've seen, it would seem that these action-poised figures will be pretty darn hot! Though this is not the first venture by Bandai Japn on Western properties (e.g., The Simpsons capsule set), this will be one of the best examples of what can be done for detailed characters. With the introduction of this set, we are sure that there will be more Western heros to come. Now if they can just do some Spawn capsule figures...

You can PreOrder the whole set of 6 here at