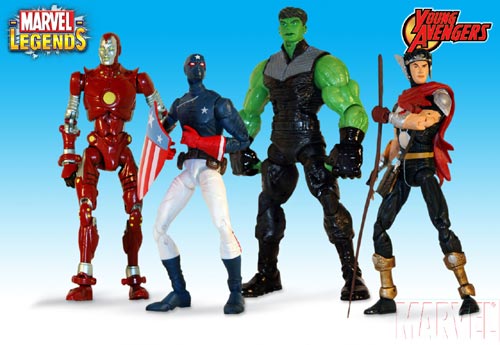 Marvel.com has put up on their site new images of the upcoming Marvel Legends Young Avengers boxset coming from Toy Biz later this year, that you can download as wallpaper for your desktop. Click here to check it out.

Iron Lad Iron Lad (patterned on Iron Man) is a teenage version of Kang the Conqueror, armed with a bio-metal suit that responds to mental commands.

Hulkling (patterned on the Hulk) is Teddy Altman. He has shapeshifting abilities, and enhanced strength. Both he and Wiccan have no knowledge of any connection to former Avengers members. As of Issue #9 it has been revealed that he is of Skrull descent.

Wiccan (formerly Asgardian) (patterned on Thor) is Billy Kaplan. He has the ability to use magic, giving him his Thor-like powers of flight and lightning generation.