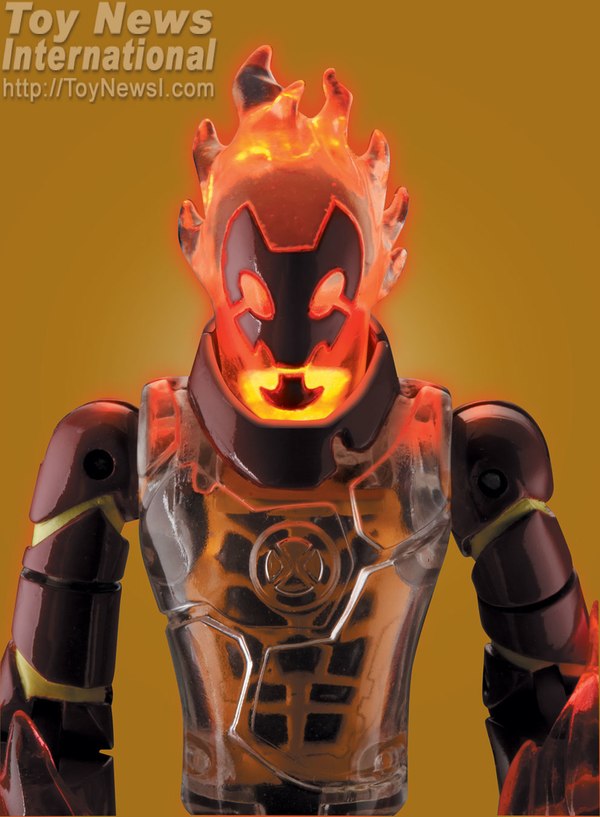 
Featuring action figure play unlike anything in the boys' category today, Bandai America Incorporated and Cartoon Network are set to unveil this month the much-anticipated lineup for Ben 10, the network's hit animated action adventure series. The Ben 10 toy line includes a variety of one-of-a-kind action figures in different sizes, alien vehicles, dynamic role-play and other products.


Ben 10 follows the adventures of 10-year-old Ben Tennyson, an unlikely hero who discovers a strange device resembling a wristwatch inside a crashed meteorite. Once the watch, called the "Omnitrix," permanently locks itself on his wrist, Ben discovers that he can transform into 10 different and fantastic alien beings, each with unique powers and abilities--but while retaining his 10-year-old personality. As he learns to control these newfound powers, he decides to use them to right wrongs and fight evil. But sometimes he cannot resist using the Omnitrix to satisfy his own curiosities, landing him in some major kid-style trouble. Fortunately his grandfather Max and cousin Gwen are there to keep him in check and bail him out of trouble when he needs it.

Ben 10 launched January 14th on Cartoon Network to tremendous ratings among boys 6-11 and 9-14. Since then, the show has shown strong ratings growth week-to-week. All new episodes debuted May 29th, and then on June 5 th, Ben 10 started stripping with action-packed fun every weekday at 5:30 pm.

"Ben 10 has been a ratings powerhouse for the network since its debut," said Christina Miller, vice president of U.S. consumer products for Cartoon Network Enterprises. "We are looking forward to the excitement and enthusiasm this innovative toy line will bring to fans of the show. We also expect many new viewers will be inspired to tune in after seeing the toys, which capture the unique play potential of Ben 10."

"Ben 10 is one of the most unique toy lines ever created by Bandai America," said Michael Riley, vice president of marketing, Bandai America Inc. "Not only are we leveraging our past successes in the boys' action figure aisle, we're taking traditional product categories and adding lots of new and interesting play patterns to make this dynamic lineup unlike anything out there today."

-- Alien Collection: Collectible 4" figures of all the 10 aliens that Ben can initially transform into, including Heatblast, Greymatter, Fourarms and Stinkfly. Each comes with a collectible lenticular card that depicts Ben transforming into one of the aliens, as well as an exclusive animation disk of 8 cels from the show that can be used with the Alien Laboratory playset.

-- DNA Alien Heroes: 6" figures with cool action features, including oozing or glow-in-the-dark DNA slime that appears on the character's body

-- Metamorfigures: 8" figures that transform from their alien forms into unique spy gear, including a working flashlight, binoculars and water gun

-- Role-play, including the Omnitrix Alien Viewer, where kids can insert the animation disks (from the 4" figures and deluxe playset) into the device's face to see Ben transform right before their eyes, and the Omnitrix F/X, which features red and green flashing lights and transformation sound effects from the show

-- Deluxe playset, an exact replica of the "Rust Bucket" RV that Ben is traveling in, transforms into an Alien Laboratory where kids can make clay molds of the aliens, dissolve their Alien Rocks (2 included), as well as view the animation disks (3 included) that come with the 4" figures and the Omnitrix Alien Viewer

A leader in introducing Japanese toy trends to the United States, Bandai America Incorporated is a subsidiary of NAMCO BANDAI Holdings (USA) Inc., a newly formed entity that resulted from the integration of Namco Ltd. and Bandai Co. Ltd. of Japan. Global interests now encompass five strategic business units: toys and hobby (toys, models, apparel and sundries), amusement facilities, game content (home and arcade console gaming), mobile content, and visual and music content (including home entertainment). Bandai America is the manufacturer and master toy licensee of some of the most popular brands in children's toys and entertainment today, including Power Rangers, Teen Titans, Firehouse Tales and Tamagotchi. The company is headquartered in Cypress, California and information is available at www.Bandai.com.