Bluefin
by Jay Cochran
September 23, 2013
Two big Hollywood stars are about to join the S.H. MonsterArts series of high quality, fully poseable monster action figures: the Alien and the Predator! The two famed creatures are being released in the standard S.H. MonsterArts 18cm size, with all-new individually sculpted detail and the posing technology you've come to expect from Bandai's action figures. These popular characters from the dream-team series "Alien vs Predator (AVP)" will be released consecutively over two months. Now you can experience the universe's fiercest creatures battling inside Japan's fiercest monster action figure series!

Released by Dark Horse Comics in 1990, the "Alien vs Predator" comic book series represented a long-anticipated chance to showcase two of Hollywood's most popular creatures locked in mortal combat. The subsequent "AVP" series took the battles from the page to the silver screen, in a re-working of the original concept in theatrical form. The timeline picks up after the 1987 film "Predator," split into two films: "AVP: Aliens vs Predator" (2004) and"Aliens vs Predator: Requiem" (2007).

Alien Warrior:
The premiere release in the series is the Alien Warrior from the 2004 AVP film. In the movie, this sleek re-working of the original Alien design was animated using CG techniques to portray its inhuman sense of balance and motion. The S.H. MonsterArts figure perfectly replicates this on-screen appearance. The joint system has been specially designed to allow dynamic poses without breaking the figure's distinctive silhouette. The unique head structure is rendered with translucent plastic. Thorough research allowed us to bring subtle organic details that were almost impossible to see on-screen to life in the sculpt, and every effort was made to conceal the joints for a natural appearance. The S.H. MonsterArts edition of the Alien Warrior represents a new pinnacle for Alien action figures.

The aggressive nature of the Alien is accentuated by its ferocious-looking inner mouth and its giant, spiked tail. We paid special attention to these key "weapons" of the creature. The top of the head can be slid to open the main mouth and reveal the threatening inner mouth. And the tail was provided with joints to allow multiple degrees of freedom for achieving and holding the subtlest poses. And the tip of the tail uses diecast metal parts to achieve.

Accessories include a finely detailed egg chamber and the "juvenile" form of the Warrior, the "chestburster." All can be displayed together to expand your display possibilities. Two different hand variations are included as well, for enhanced posing and expressiveness.

Predator Wolf:
The second figure in the series is the "Predator Wolf" from the 2007 film "Aliens vs Predator: Requiem." It represents the "cleaner" Predator sent from their home world in order to defeat the hybrid Alien that appeared at the end of the first film, nicknamed "Predalien." To honor this fiercely proud Predator, who eschewed cooperation with humans to fight the Aliens on its own, we spared no effort to enhance the detail and poseability of the action figure. A portion of its armor is diecast metal; the weaponry is molded in finely detailed ABS; the body details are PVC; and the famed "dreadlock" hair utilizes flexible material so as not to interfere with posing. This is the ultimate action figure portrayal of the ultimate Predator warrior.

Posing technology honed in the S.H. FigureArts series lets you replicate the Predator Wolf's balance of speed and ferocity. The figure allows dynamic poses such as an unmasked howl, two-handed spear holding, and holding the slasher whip weapon to be replicated in all their on-screen glory.

The Predator's signature mask can be removed to reveal its organic face beneath. Its jaw can be swapped out with variation parts to replicate both "normal" and "howling" appearances. No attention to detail was spared, including the use of different colored eyes and the dripping outer jaw. The wrist cover opens and closes, letting you pose the Predator accessing its computer. And the right-hand wrist blade can be exposed and retracted. The retracted spear can be mounted on the back, letting you pose the Predator either in combat or with its weapon stored away.

The Predator's spear was replicated in fine detail and accurate proportions; two expanding versions are included. Expanded and retracted versions of the slash whip are included as well. In addition, the set includes "acid" effect parts (used in the film for erasing traces of its existence) a "cleaner case" with various weapons, and a "tracking cylinder" used in the film for extracting
blood samples. 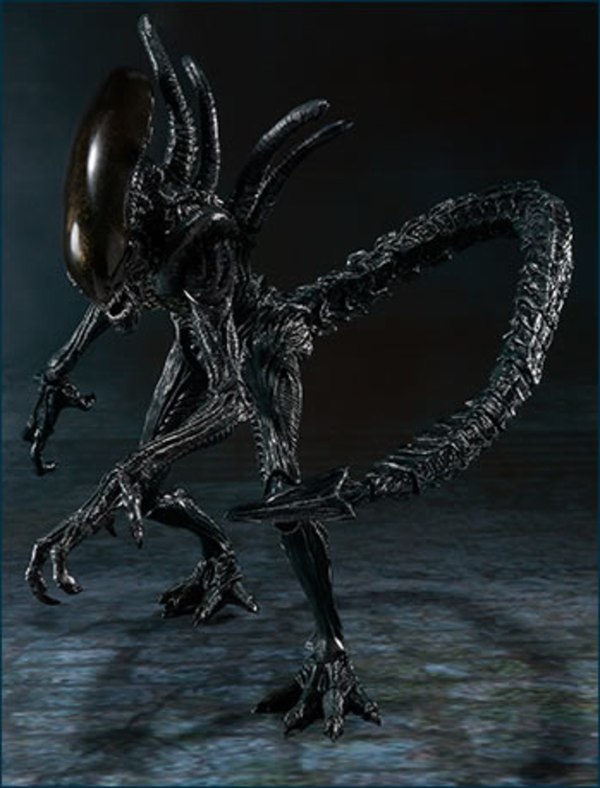 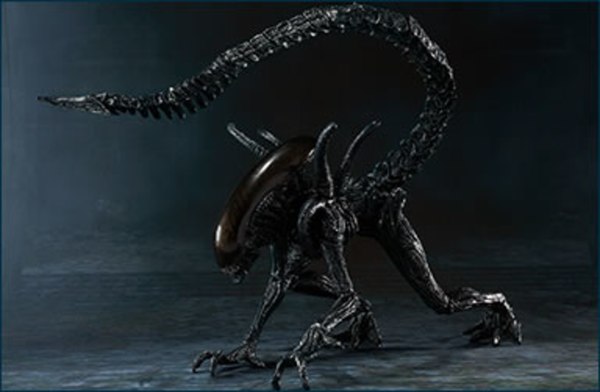 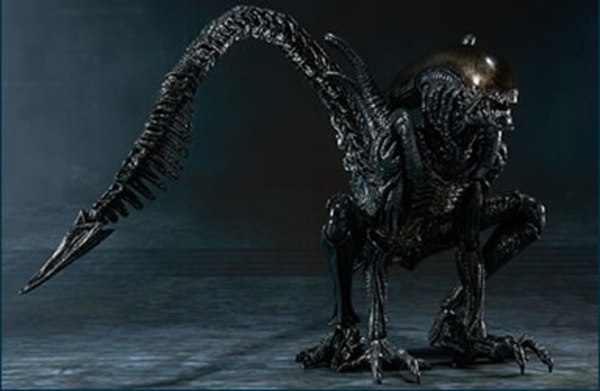 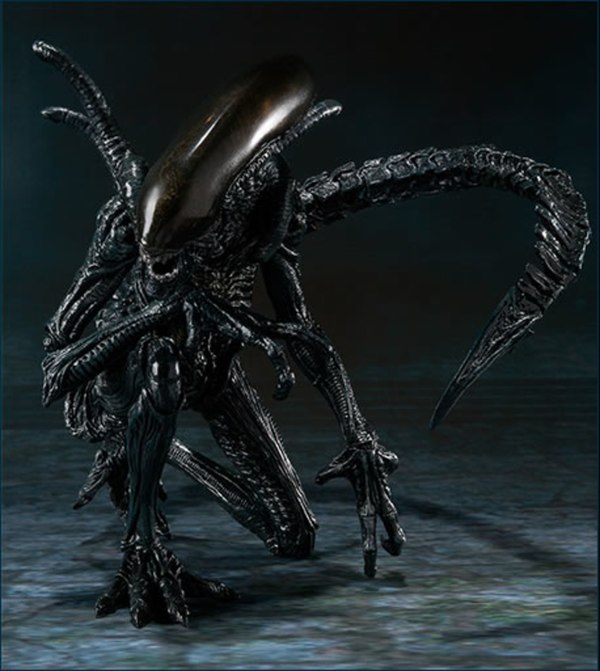 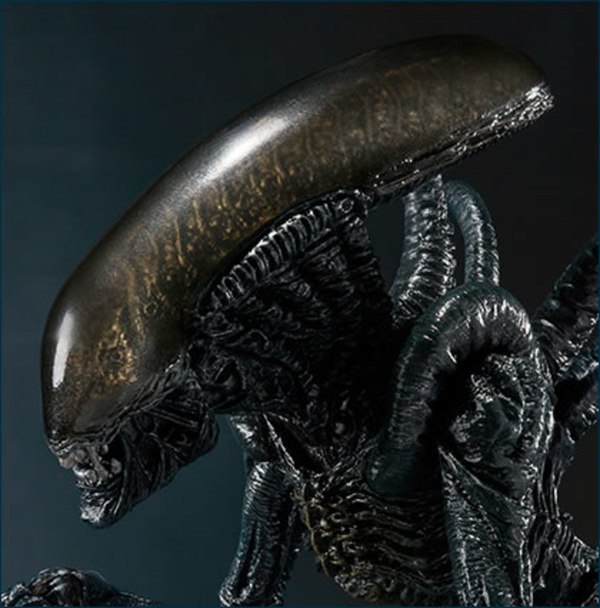 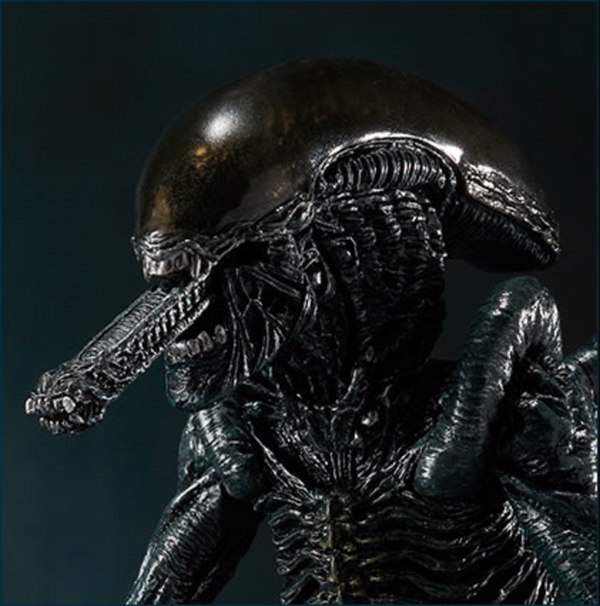 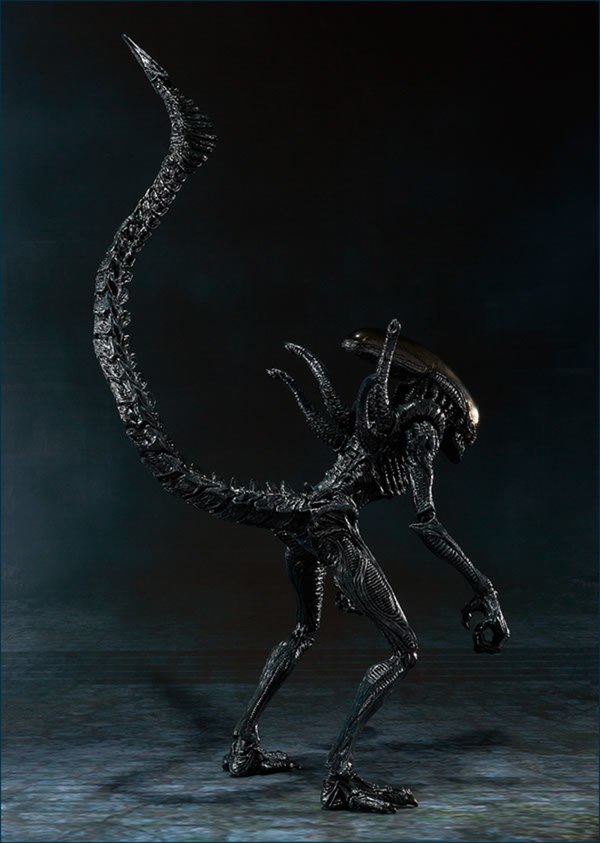 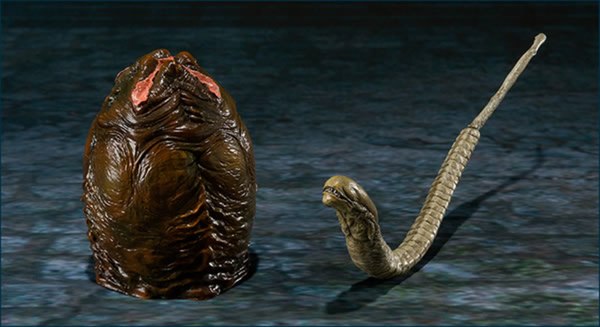 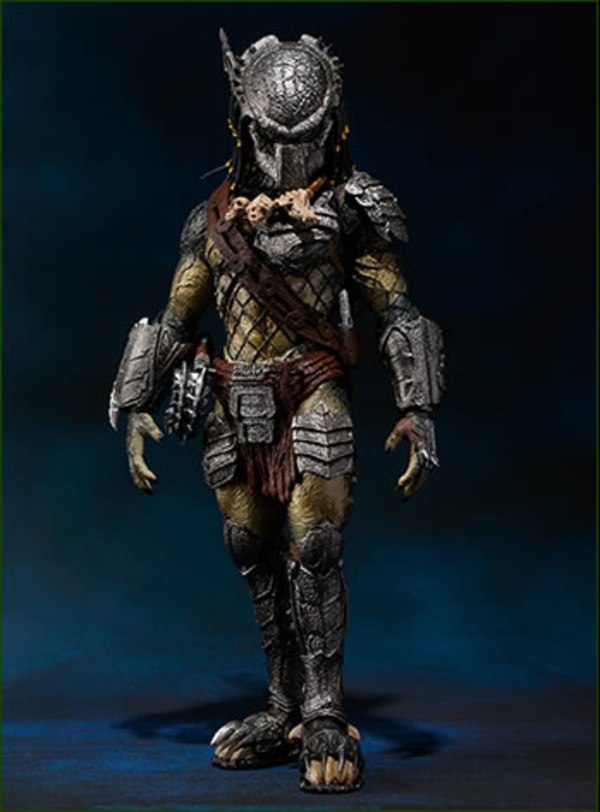 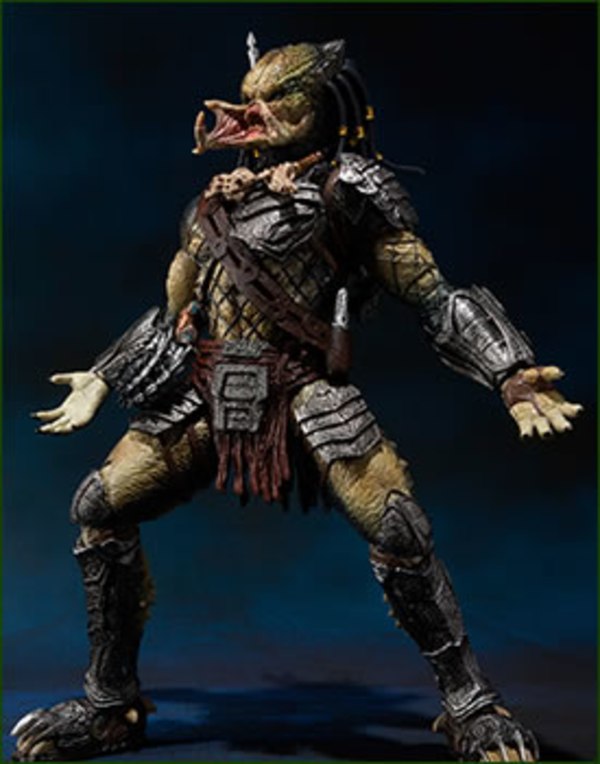 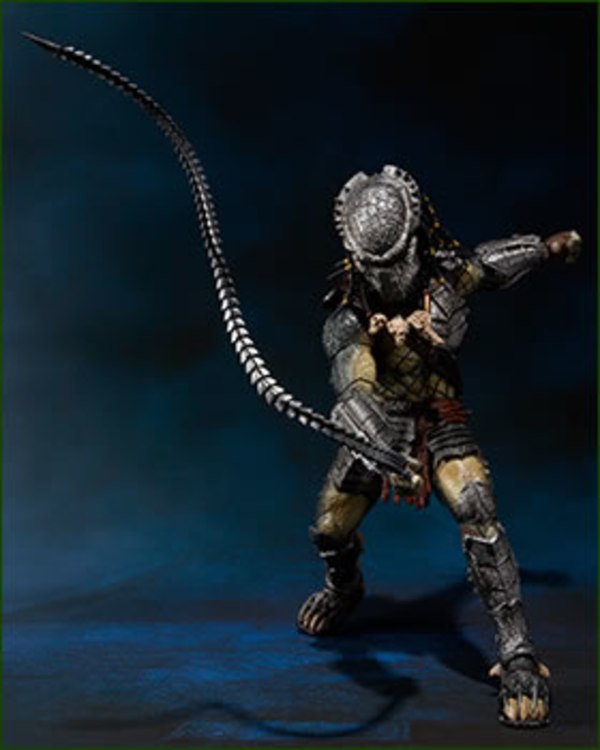 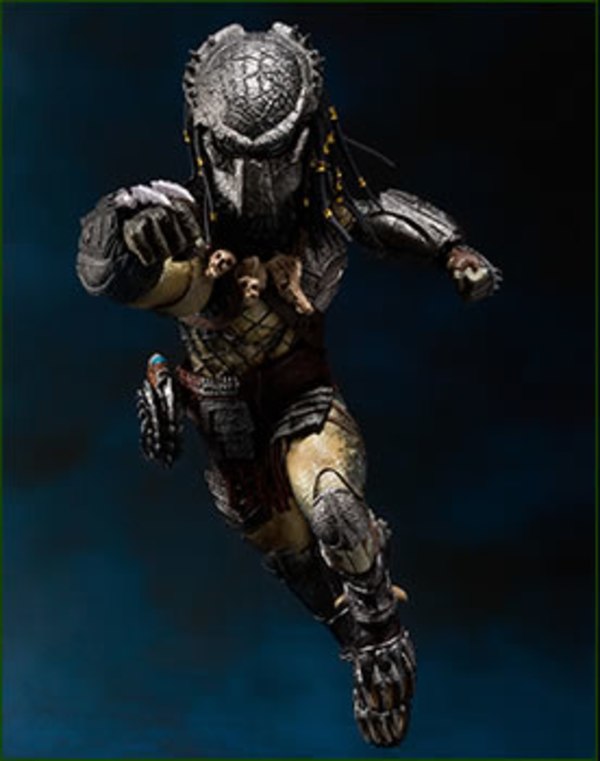 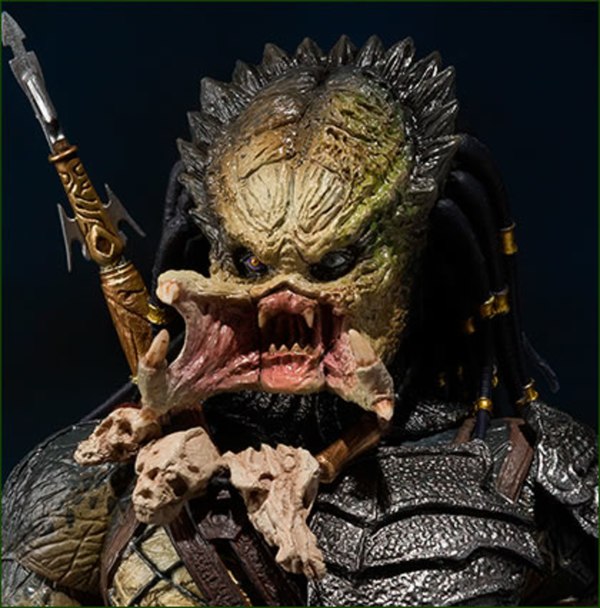 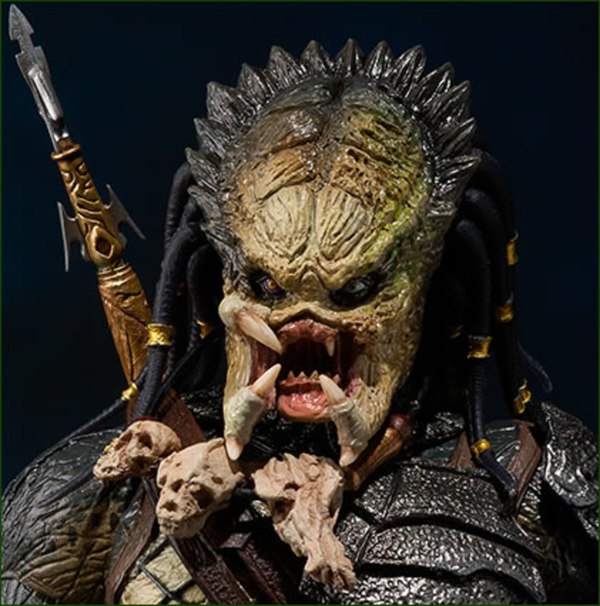 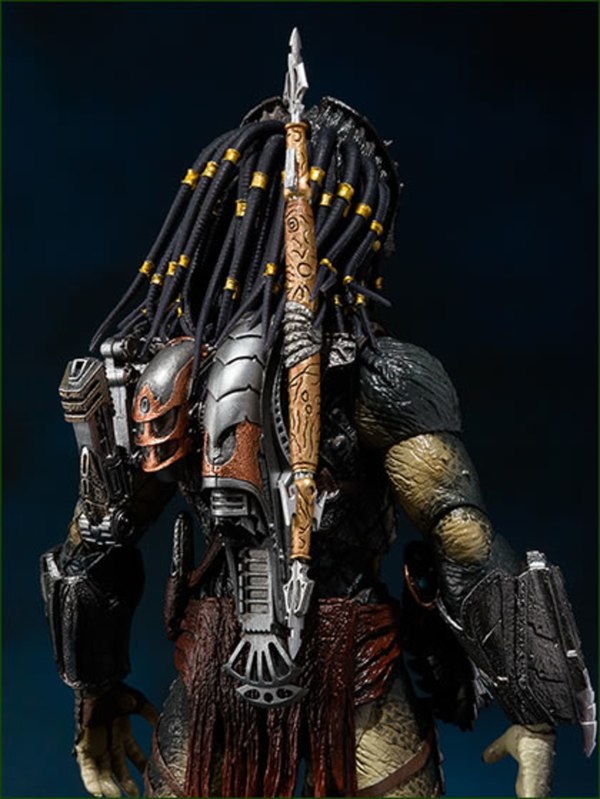 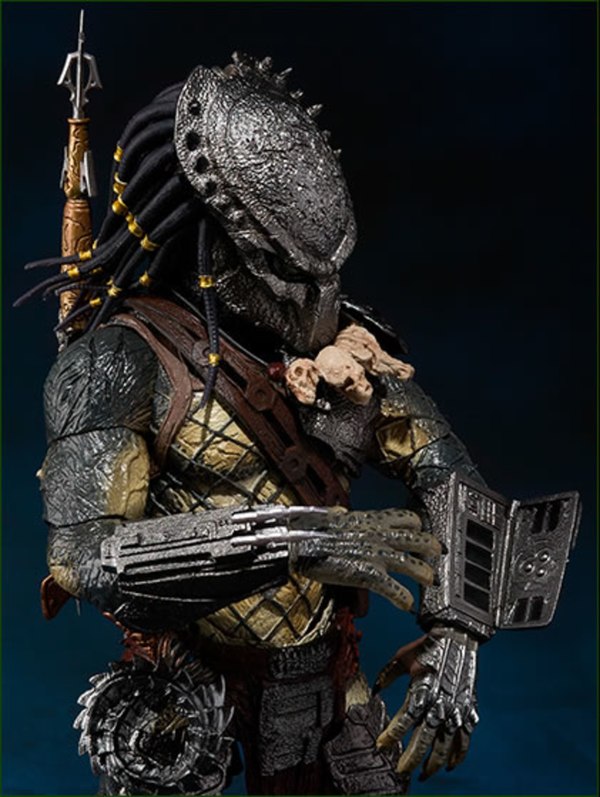 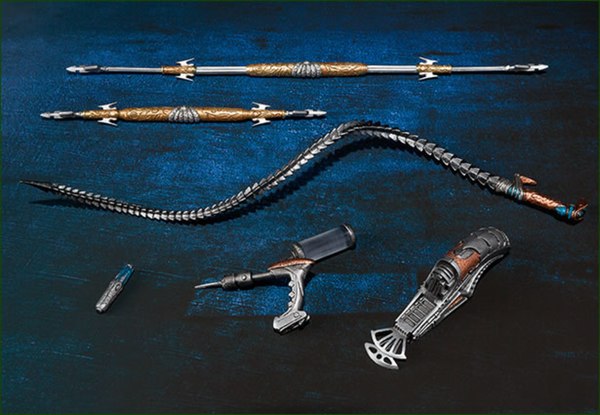 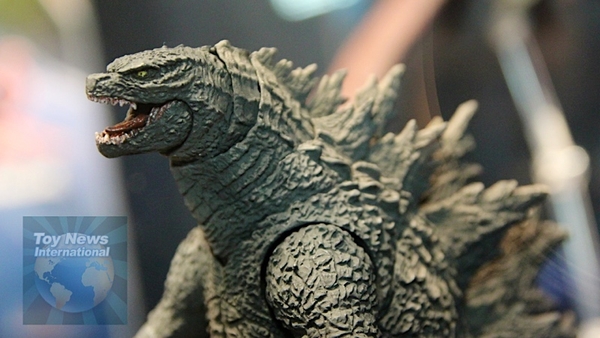 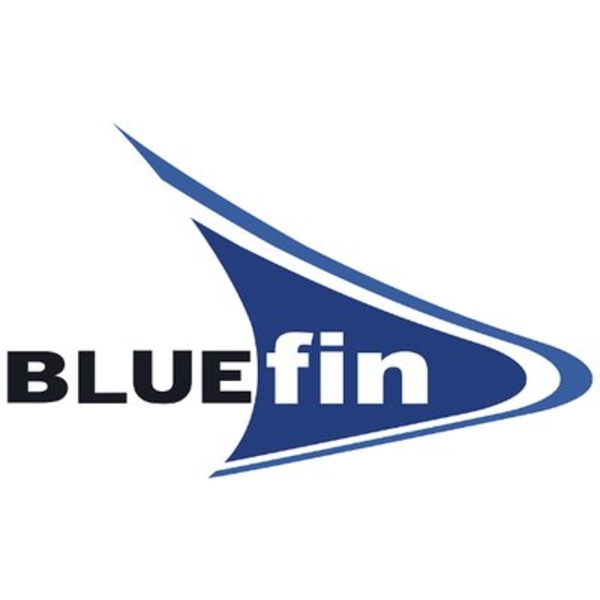 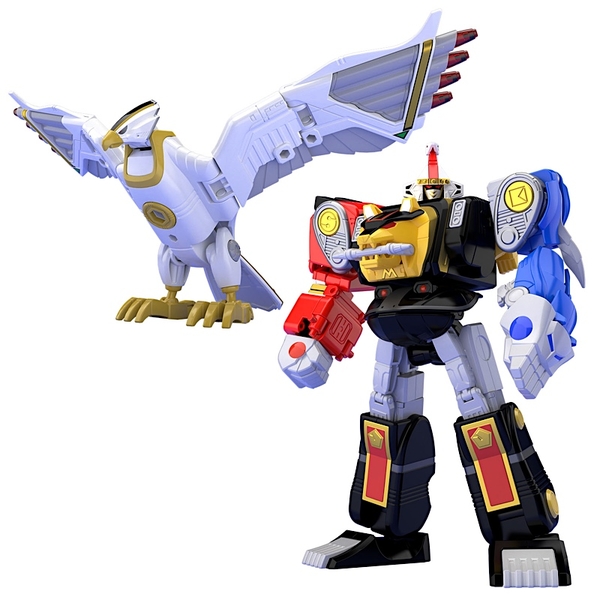 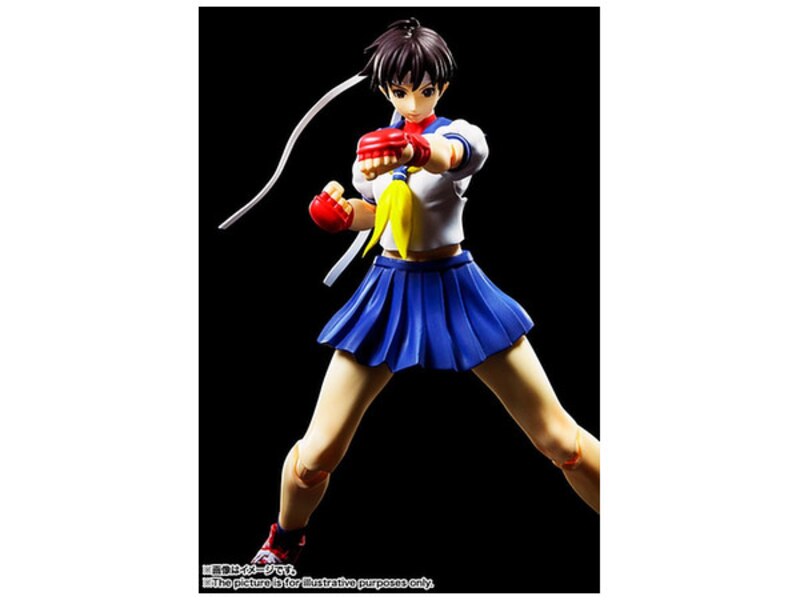