2013 New York Toy Fair
by Jay Cochran
February 08, 2013
Playmates has released their Toy Fair press release for their line of TMNT producrts based on the Nickelodeon Cartoon. Check it out and check back on Sunday for complete coverage of the Playmates show room from the New York Toy Fair.

Playmates Toys is set to unveil the action-packed next generation of the Teenage Mutant Ninja Turtles toy line, inspired by Nickelodeon's hit new CG-animated show. New elements, including the mysterious Ooze substance and Turtle-loving pizza, have been added to the product line and will be displayed at the American International Toy Fair in New York City, February 10-13, 2013, Booth #1525.

Teenage Mutant Ninja Turtles premiered on Nickelodeon on Sept. 29, 2012 and was an instant hit, drawing almost 12 million viewers during its premiere weekend. Coinciding with the series, Playmates Toys, the mastermind responsible for the successful toy line over the last three decades, introduced a new line which became one of the top action figure brands by the end of 2012.

Turtles were on a slew of Holiday "Hot Toy Lists", and the Turtles Shellraiser group vehicle, along with the property as a whole, were both selected as finalists in the 2013 Toy of the Year (TOTY) Awards, a prominent awards program from the Toy Industry Association.

"Playmates has done an amazing job at capturing the look, humor, action and depth of the Teenage Mutant Ninja Turtles series into great play experiences for kids and fans of all ages," said Manuel Torres, Senior Vice President, Global Toys and Consumer Electronics, Nickelodeon. "The tremendous success of the series, coupled with the outstanding launch of our toys makes us excited to introduce our second installment of products to wow our fans."

Highlights of the 2013 Teenage Mutant Ninja Turtles line from Playmates Toys include the following:

Action Figures
New waves of Basic Action Figures will be introduced throughout the year, including Leatherhead, Baxter Stockman, Cockroach Terminator, as well as Stealth Tech Leonardo, Raphael, Donatello and Michelangelo. The highly detailed basic action figures contain more than 12 points of articulation and are uniquely sculpted, with heights ranging from 4.25" to 5.5." Each figure is compatible with most of the vehicles and playsets in the line.

Deluxe Action Figures
With the ability to fling out projectiles to take out the enemy,the Flingers Deluxe Action Figures come fully equipped and ready for battle! Kids simply load the different projectiles into the backpacks of each figure, roll the figures across a hard surface and watch as the contents of their backpacks launch! Each figure comes decked out in battle armor and with personal projectiles. Leonardo launches 10 sewer lids, Michelangelo includes 10 pizza pie discs, Donatello includes 3 Bo Staffs and Raphael includes 3 Sai weapons.

Leonardo, Raphael, Donatello and Michelangelo are always ready for a battle against Shredder and the evil Foot Clan, and now the Turtles can be thrown into the battle with the Throw N' Battle Deluxe Figures . Decked out in their night ninja outfits, the Throw N' Battle Turtles start out in stealth mode with their legs and arms folded behind their head. Give them a toss into the battle and they spring to their feet, unleash their weapons and are ready to take out Shredder and the Foot!

Classic Collection
The Classic Collection Action Figures reflect the look of the original Teenage Mutant Ninja Turtles from the 80's TV show. The assortment is expanding this year to include the Turtles arch-nemsis' Bebop and Rocksteady. Each figure stands 6 inches tall, features more than 30 points of articulation and is authentically detailed to appeal to the true action figure collector. Each figure will come with its core Ninja weapons and a personalized sewer lid cover name base.

Ooze Segment
Get ready for ultimate Ooze action with the Mutagen Ooze Action Figures! Outfitted in their Ooze Bustin' gear, the Turtles have discovered a way to safely handle the Ooze (the mysterious substance that transformed the Turtles from pets to ninjas) and fling it back at the Kraang and the many mutants. Each Turtle is fully articulated and comes with a backpack and scoop that kids can load up with Mutagenic Ooze (Ooze sold separately). Kids just push down the plunger to squirt the Ooze into the scoop and then they can fling the Ooze at the bad guys! Figures included are Ooze Chuckin' Mikey, Ooze Launchin' Leo, Ooze Scoopin' Donnie and Ooze Tossin' Raph.

Handle the Mutagen Ooze Canisters with care! Ooze is the mysterious substance that transformed Leonardo, Michaelangelo, Raphael and Donatello from pet turtles into the heroes in a half-shell that they are today - but also created their many mutant friends and foes. Each 2.4 oz canister of Mutagen Ooze comes with a bonus mini Turtle inside. Kids can collect all four and can use this creepy compound across the entire Mutagen Ooze figure and vehicle segment.

Cruise the Ooze with the Mutagen Ooze Sewer Cruiser, a fast-floating wet ski, complete with its own slick defense system - a cooler contraption to diffuse the Ooze and ice any Kraang in pursuit. The Sewer Cruiser floats so it can be used on land or in water. It is compatible with most of the Turtles basic action figures (sold separately).

Turtle-ize the skies with the Mutagen Ooze Drop Copter, anairborne assault helicopter, complete with twin tubs to diffuse the Ooze on the Foot Clan. Fast spinning propeller blades and a real working winch help the Turtles race to the rescue and get out of danger quickly. The Drop Copter is compatible with most of the Turtles basic action figures (sold separately). 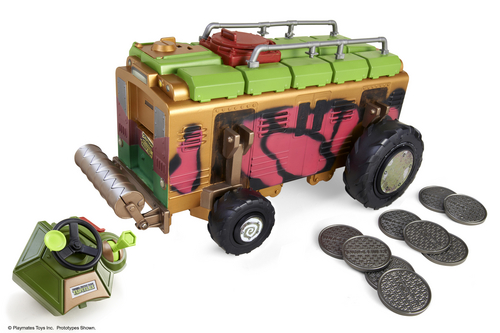 Remote Control Vehicles
Drive the Turtles into their next battle with the Ninja Control Shellraiser, afull function, remote control vehicle. From rail-riding to street-surfing, Donatello's customized combat creation packs a powerful punch. With the green team all aboard, the Turtles will cream the Kraang with a frenzy of fast-firing sewer covers. This vehicle comes with full-steering remote-control action, as well as the ability to control the rapid-fire sewer-cover cannon. The Ninja Control Shellraiser is compatible with most Turtles basic action figures (sold separately).

Turtle Vehicles
As seen in the hit TV show, the Patrol Buggies are individually customized and ready for action! Two assortments are available; Leo and Donnie's Patrol Buggy and Mikey and Raph's Patrol Buggy. With Leo and Donnie's Patrol Buggy, kids can run the Foot off the road with Leo's rocket "grenade" or scare them to the sidewalk with Donnie's Kraang-crushing big wheels. With Raph and Mikey's Patrol Buggies, kids can blast the Foot Clan from the fast lane! They can run Dogpound out of town with Raph's reloadable road rash missile or crush Fishface's robo-feet with Mikey's mighty monster wheels. All four vehicles can also snap together to become the ULTIMATE MEGA PATROL BUGGY! The Patrol Buggies are compatible with most of the Turtles basic action figures (sold separately). 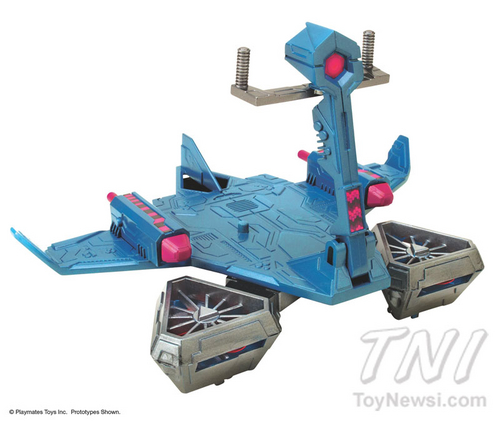 It's triple turbo terror as the Kraang launch an aerial alien assault with the Hover Drone. Will the Turtles strike back and repel the robo raiders? With triple-turning turbines and two spring loaded missiles, the Kraang are on the attack. The Hover Drone is compatible with most Turtles basic action figures (sold separately).

From the streets to the sewers of NYC, the Ninja AT3 vehicle is equipped to handle any terrain as the Turtles seek out and battle against the evil Foot! The AT3 is the latest of Donatello's vehicle creations and comes equipped with a powerful spring loaded missile projectile to stop Shredder and the Foot in their tracks. The AT3 is compatible with most of the Turtles basic action figures and comes with an exclusive Leonardo action figure decked out in his moto-cross riding outfit, helmet and gloves.

Playsets
A classic theme for the Teenage Mutant Ninja Turtles and re-established in the new Nickelodeon CG-animated series, Playmates Toys has combined the compact look and feel of a pizza box with a fully featured playset in the new Anchovy Alley Pop-Up Pizza Playset. The pizza box pops open into a subway scene that stands 18 inches tall. Ninja action features in the playset include a portable pizza oven that flings fresh pizzas, floor traps, a trick sewer cover that throws the bad guys for a loop and an abandoned subway tunnel.The playset is compatible with most Turtles basic action figures (sold separately).

Role Play
Now the Teenage Mutant Ninja Turtles are available at your finger tips with the Turtle-Comm! As seen in the hit TV show, the Turtle-Comm is the Turtles go-to device to communicate with each other. The Turtle-Comm lets kids call the Turtles, or the Turtles will even call them. All four Turtles even have their own unique play patterns. Go on missions with Leonardo, train with Raphael, listen to jokes from Michelangelo and answer Turtle trivia questions from Donatello.

The transformation into a hero-in-a-half shell is not complete without having the authentic Teenage Mutant Ninja Turtles Shell! This tough as nails, one size fits all, PVC plastic Turtle shell includes adjustable straps that fit over the shoulders and around the waist. The shell is compatible with the Ninja Combat Gear role play weapons and includes two holsters on the right and left backside of the shell to hold kids' weapons as they get ready for battle. The shell also includes an inner handle so kids can remove the shell from their back and use it as a front shield.

Kids can immediately transform themselves into their favorite Teenage Mutant Ninja Turtle with the Ninja Turtles Deluxe Mask Assortment! This deluxe assortment includes masks for Leonardo, Raphael, Donatello and Michelangelo just as they appear in the hit TV show. The one size fits all masks include the Turtles signature colored bandana, an elastic strap and a soft rubber inner mask for comfort and fit.

Found Playmates To Announc on Ebay 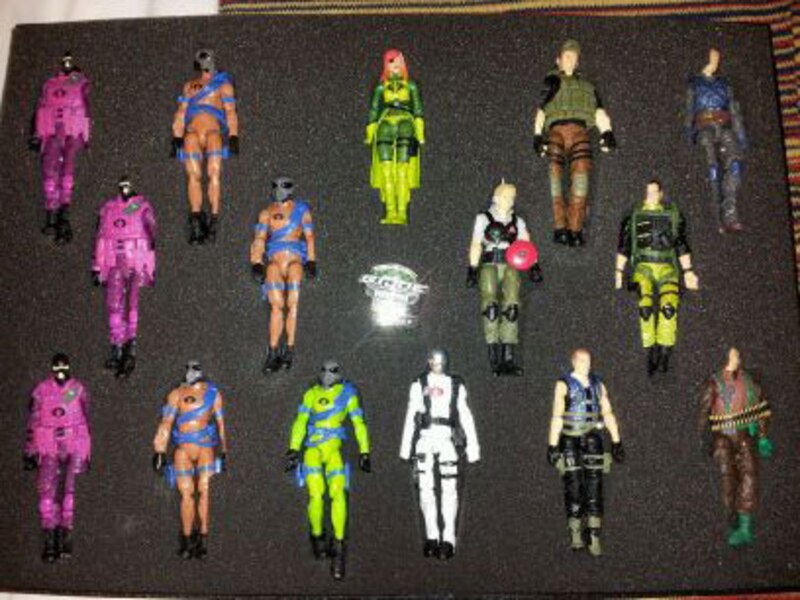 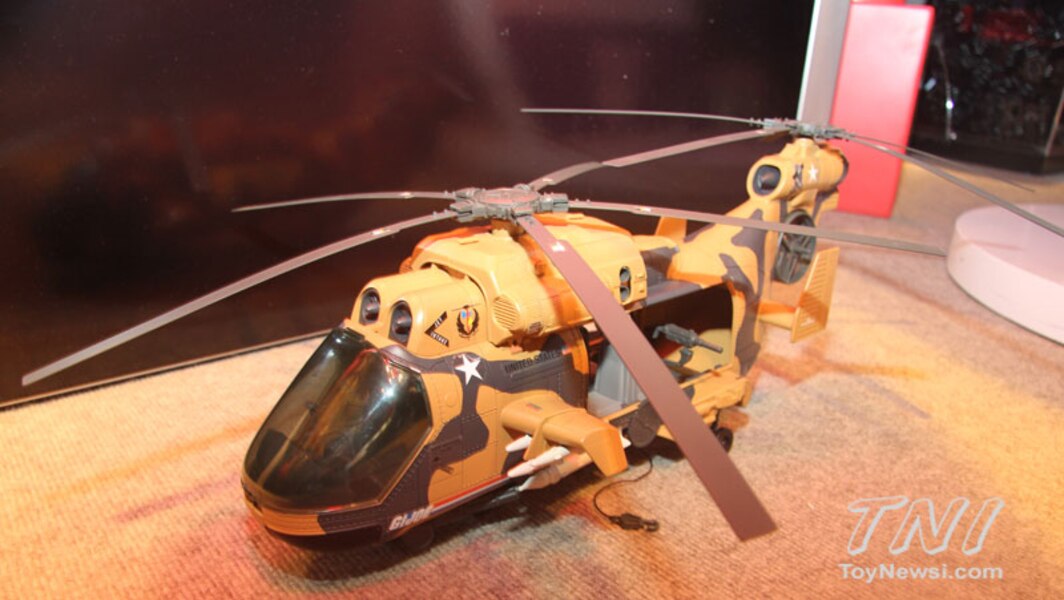 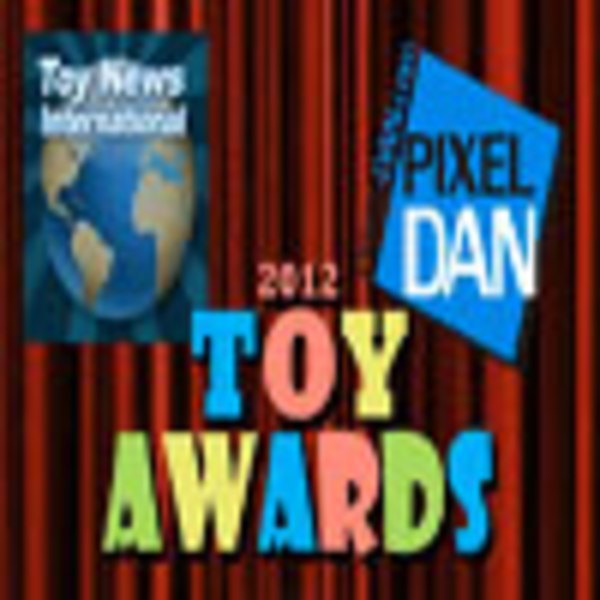 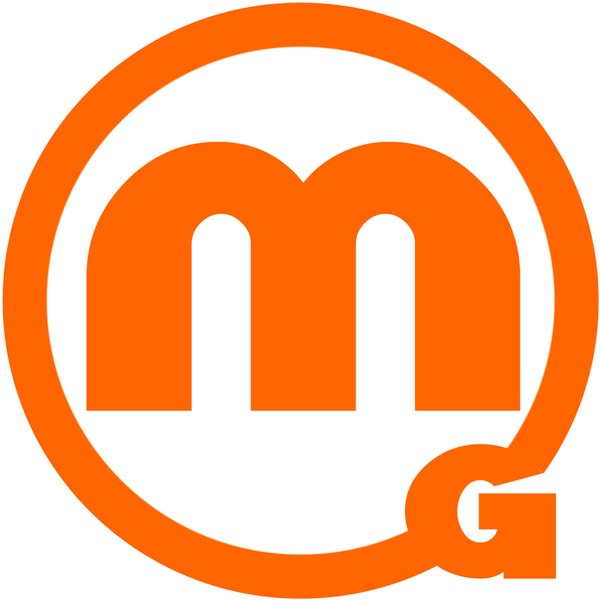 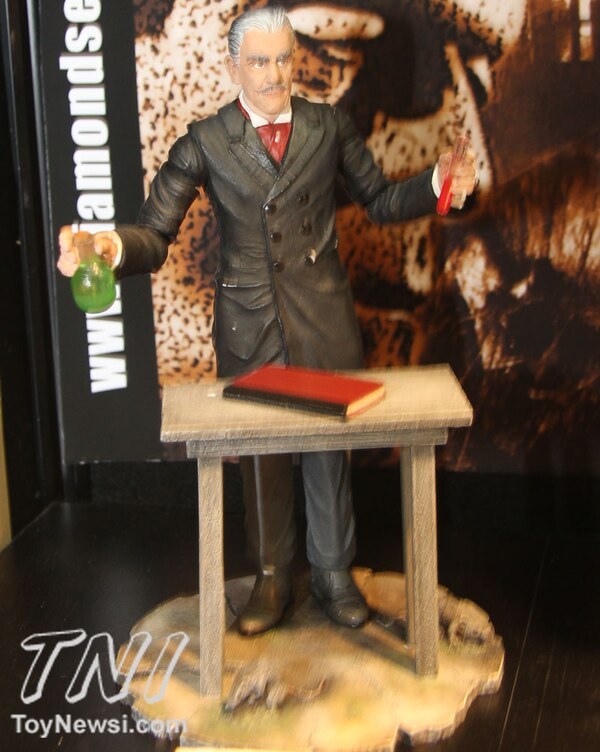