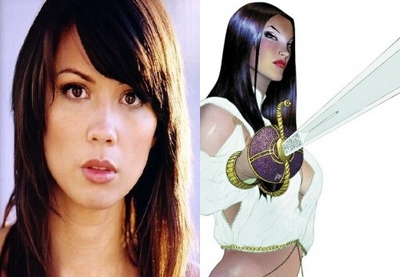 Oliver Queen has always had an interesting relationship with the al-Ghuls. He defeated Ra's al Ghul and is technically married to Nyssa. So needless to say, we suspect his life will become a lot more complicated when the newest al Ghul makes her debut on the show.

The CW announced today that Lexa Doig (Continuum, V) has been cast in the role of Talia al Ghul, the famous daughter of Ra's al Ghul and the half-sister of Nyssa. Described as worldly and cultured, Talia is an elite warrior who doesn't pick sides but rather creates her own. She'll make her first appearance in the tenth episode of Arrow this season and will be appearing in multiple episodes.

What we don't know is what sort of role she'll play in relationship to Oliver Queen and Team Arrow. As fans know, Talia is usually a villain, but is occasionally a force for good in the DC Universe. In the comics, she shares a particularly close relationship with Batman. (How close? Well, she's the mother of his son!) She's also appeared in other media - notably in the film The Dark Knight Rises, where she was played by Marion Cotillard.