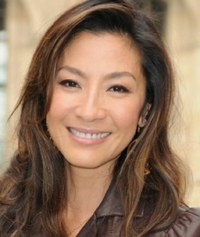 Sources have confirmed to Deadline that Michelle Yeoh has been cast as a Starfleet Captain on CBS' new Star Trek: Discovery.

Yeoh will play the character of Han Bo and her ship is the Shenzhou. The Yeoh-run spacecraft is set to play a big role in Discovery‘s first season.

Little is known about Star Trek: Discovery, expect that it will take place about 10 years before the events of the original series, and that the lead character will be a young woman, likely non-white, serving as a lieutenant commander aboard the Federation starship Discovery, known to her crewmates as “Number One.”

The series was co-created by producer Bryan Fuller with Alex Kurtzman and served as showrunner until last month when he stepped down from the role, handing the captain’s chair to his number twos, Gretchen J. Berg and Aaron Harberts. Earlier this fall, Star Trek: Discovery‘s launch was pushed from January to May 2017.