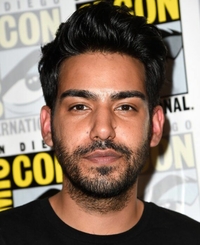 iZombie star Rahul Kohli will guest-star in an upcoming episode of Supergirl as Jack Spheer, a charismatic tech genius who has spent decades working on a medical innovation that will eradicate major illnesses and change the face of the world.

The character makes his debut in episode 18, titled “Ace Reporter,” where he comes to National City to demonstrate his technology to members of the press, including Kara Danvers (Melissa Benoist) and Snapper Carr (Ian Gomez). His arrival stirs up front page news as well as feelings in his old flame Lena Luthor (Katie McGrath).

No word or details if the character will follow the character from the comic inwhich Spheer’s invention mutated him into the villain known as Biomax, who had the power of mind control.

“I’m so excited to be working on Supergirl starring as Jack Spheer,” Kohli says. “It’s given me the chance to continue my relationship with The CW as well as fulfill my goal of meeting a Kryptonian.”