Courtney Ford To Recur On 'Legends Of Tomorrow' 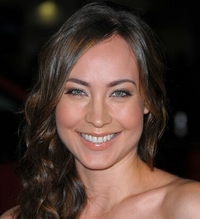 During the third season of the superhero series, Legends of Tomorrow, Courtney Ford will recur as Eleanor, the daughter of Damien Darhk (Neal McDonough).

Eleanor is described as "cunning with a charming dose of otherworldly creepiness," she possesses the uncanny ability to manipulate others, EW.com reports.

Ray Palmer will feel an “unexplainable attraction” to Eleanor as she is the real-life wife of Legends star Brandon Routh.

Eleanor appeared as a young girl known as Nora during Season 4 of Arrow, where both of her parents (mother Ruvé included) were eventually killed. It would appear that Legends will pay Eleanor a visit some years into the future, as they set out on their Season 3 mission to fix myriad anachronisms created by the May finale.