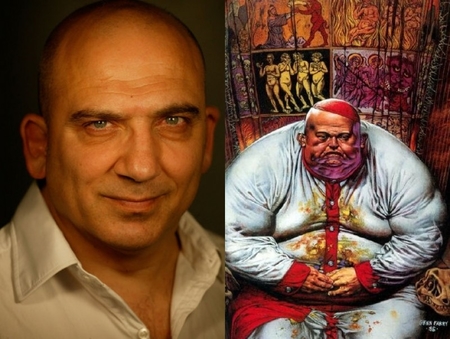 Jonny Coyne is set for a key recurring role of Allfather D’Aronique on the upcoming third season of AMC’s Preacher.

The character is physically large, overweight, and a revolting slob, but also potentially the most powerful man in the world. He is quietly sinister with eyes that see more than he says.

Based on the popular cult comic book franchise, Preacher tells the absurdly twisted tale of Jesse Custer (Dominic Cooper), a small-town preacher inhabited by an angel-demon spawn that gives him the power to make people do his bidding, Tulip (Ruth Negga), his volatile true love, and Cassidy (Joseph Gilgun), a 119-year-old Irish vampire.

In Season 2, after Jesse accidentally discovered that God is absent from Heaven, the three of them set out on a road trip to find Him, all while being hunted by the Saint of Killers (Graham McTavish), an unstoppable, mythical killer from Hell. The trio’s pursuit led them to New Orleans, where they dodged local gangsters, dangerous agents, and other unimaginable mayhem on their way to uncovering an even bigger secret. Now, with Tulip’s life and Cassidy’s friendship in the balance, Jesse must rely on a mysterious figure from his past in order to save his friends and continue on with his mission.

Season 3 of Preacher is now in production in New Orleans and will return later this year.