He may have saved Freeland in season one, but Black Lightning (Cress Williams) is in for a new season of pain when Jordan Calloway returns as DC villain Painkiller in the show's sophomore season! Guest starring as Khalil Payne in season one, Calloway's promotion to series regular was revealed by showrunner/executive producer Salim Akil during Black Lightning's Comic-Con 2018 panel on Saturday, July 21. 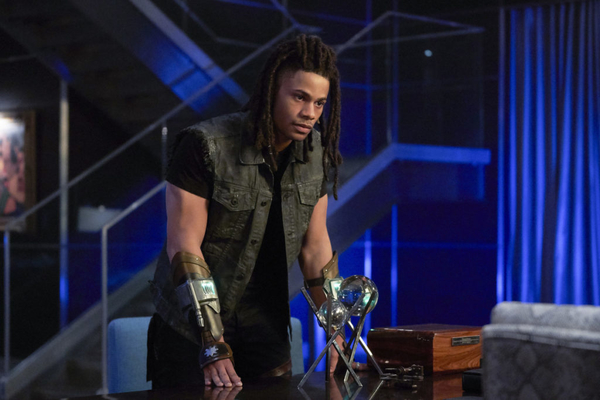 Khalil Payne was a high school All-American track star with dreams of going to the Olympics until a stray bullet severed his spine, leaving him embittered and unable to walk. Black Lightning's archnemesis Tobias Whale (Marvin "Krondon" Jones III) offers him legs for loyalty. Khalil accepts the offer and receives cybernetic enhancements that transform him into the Painkiller, meta-strong and able to generate an anesthetic from his body that causes temporary paralysis when delivered through darts. Now, he is a living weapon for a ruthless crime boss. Before long, he pines for his old life and dreams, and his teenaged love, Jennifer Pierce (China Anne McClain).

Fans at the Black Lightning panel were electrified with the news. Akil said, "I'm thrilled to have Jordan upped as a series regular. He was a great asset to our show in the role of Khalil/Painkiller during season one, and now that he has evolved into Painkiller, I can't wait for you all to see him in season two."

Black Lightning returns for season two on Tuesday, October 9, at 9/8c on The CW. Based on the DC characters, the series is executive produced by Greg Berlanti, Salim Akil, Mara Brock Akil and Sarah Schechter. Black Lightning is produced by Berlanti Productions and Akil Productions in association with Warner Bros. Television.

Can't wait for him to cross over with the CW DC.

Stoked to watch the 1st season on Netflix.

I think this will be fun.

Me too, I had no idea Black Lightningwas gonna be in these CW DC shows.

I need to get started on this show.

The first season was interesting. Let's see what comes in the next one.