Entertainment
by Outsiders
January 14, 2019
CBS All Access today announced plans to further expand the "Star Trek" universe with a new live-action series in development starring Michelle Yeoh. The series will expand on Yeoh's current role as a member of Starfleet's Section 31 division, a shadow organization within the Federation, on STAR TREK: DISCOVERY, which debuts its second season Thursday, Jan. 17 exclusively on CBS All Access in the U.S., and is distributed concurrently by CBS Studios International on Netflix in 188 countries and in Canada on Bell Media's Space channel and OTT service CraveTV.

"Michelle has shattered ceilings, broken boundaries, and astonished us with her grace and gravitas for decades. As a human, I adore her. As an actor, I revere her," said Alex Kurtzman. "Erika and Boey are remarkable, exciting writers who bring a fresh perspective to the world of 'Star Trek,' and we're all thrilled to explore the next wild chapter in the life of Captain Philippa Georgiou."

"I'm so excited to continue telling these rich 'Star Trek' stories," said Michelle Yeoh. "Being a part of this universe and this character specifically has been such a joy for me to play. I can't wait to see where it all goes - certainly I believe it will go 'where no WOMAN has ever gone before!'"

Michelle Yeoh is recognized as one of the greatest and the most successful actresses from the east. She can most recently be seen starring in John M. Chu's romantic comedy "Crazy Rich Asians," and in CBS' STAR TREK: DISCOVERY. The former Bond girl is best known for her roles in Ang Lee's "Crouching Tiger, Hidden Tiger, Hidden Dragon" and its sequel, Rob Marshall's "Memoirs of a Geisha," Roger Spottiswoode's "Tomorrow Never Dies" and Danny Boyle's "Sunshine." Michelle also starred in Luc Besson's critically acclaimed "The Lady" and voiced a role in the DreamWorks animated hit "Kung Fu Panda 2." 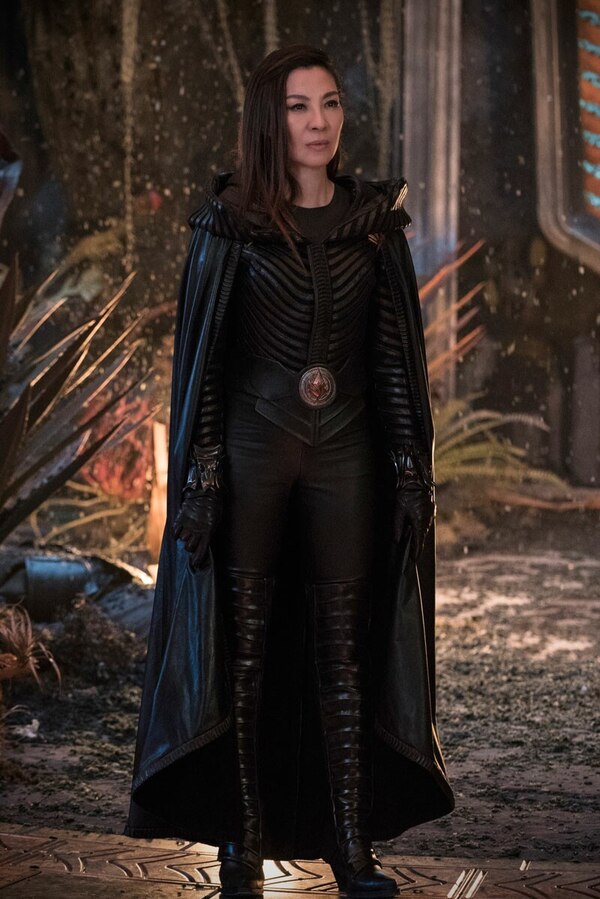 As a reviewer, with a love/hate relationship with Season 1 of Discovery, Season 2 thus far has been a whirlwind of awesome... Even in spite of those poorer elements from the first season carrying over. As Ive said in my video discussions, Anson Mounts Pike has been a brilliant addition to the series, to coincide with its overall course correction. Episodes one and two genuinely feel like proper Star Trek and thats high praise, coming from me.

Incidentally, I post links to my video discussions of both Star Trek: Discovery and The Orville Seasons 2,in the General Discussions segment of the forums. Id love for those interested to check em out!

I haven't been dying for a Section 31 show. In fact, I'm gonna say I'm against it. A lot of what makes Section 31 and other things (Xenomorphs, Boba Fett, etc) cool and interesting is their mysteriousness. The more you show something that was once mysterious, give it an origin story, give it a spin off series give a super secret clandestine "security" organization badges that they show everybody and a logo that they put on everything (F***ING WHY?), the less mystery they have and the less interesting they are.

Not a Star Trek fan in the least, but I am a huuuuuuuge Yeoh fan with The Heroic Trio and The Executioners as among my top fave movies of hers, so I will likely give this a look for her.

I was pretty happy with the first episode of season 2 for Discovery. Much better than anything we saw in season 1 which I thought was horrible. Unfortunately they can't just pretend season 1 didn't happen so there are things the will have to try and deal with like the stupid jump drive which we will have to see how they deal with, but I have hope at least this show can be salvaged.

As for this Section 31 show, it might be interesting but I can't say I was dying for such a show. I thought the section 31 was an interesting subplot in DS9 but not so much that it warrants its own series. Honestly this seems like something they created simply so they could keep Yeoh involved with Trek as opposed to coming up with a good idea for a show and then going out and getting good actors for it. Either way I am far more interested in seeing what they do with the new Picard series than this.

I'm not interested at all in the Georgiou? character but I am interested in any Section-31 stuff.

I think fans have been clamoring for a Section 31-centric series for forever and a day, now. Its interesting that the shoe in the door finally comes down the pike as a spin-off of the very much divisive Discovery.

I don't know man. To me there were a lot other stories that needed to be told. Even something right after ENT would be nice. We all want to see what lies ahead of the 24th century and after VOY.

Anyway, as a limited sereis to tell the origins of Section 31 and some of it would cool since it has only been dropped occasionally from time to time and the rest is unknown. Apparently it vanished somewhat after the events of DS9. I have to see the pilot to really know if is it any good. The first episode of the second season of DIC was good and much better than almos the whole past season. So maybe they have finally realized that they have to make a change.

About the new show, they kept Michelle for some reason and they wouldn't jsut get through all that trouble just to let her go.

Part of me is scratching their head on this one, I'm by no means a Star Trek fan but everywhere I went longtime Star Trek fans were very unhappy with the Discovery show to say the least. Judging by that I could have sworn that the series would not get a second season much less a "spin off" series. Of course, if I take a step back I can draw the conclusion that maybe I was seeing a small yet very vocal group and the majority of people did enjoy the series. Also there's the fact that this was exclusive to an app and as I understand it they don't measure viewership like a regular tv network so maybe Discovery was.... successful after all?

I think fans have been clamoring for a Section 31-centric series for forever and a day, now. Its interesting that the shoe in the door finally comes down the pike as a spin-off of the very much divisive Discovery.