Born the bastard son of a hundred maniacs, Freddy Krueger is back for fresh victims. The last of the Elm Street kids are now at a psychiatric ward, where Freddy haunts their dreams with unspeakable horrors. Their only hope is dream researcher and fellow survivor Nancy Thompson (Heather Langenkamp reprising her role from the original Nightmare on Elm Street), who helps them battle the supernatural psycho on his own hellish turf. 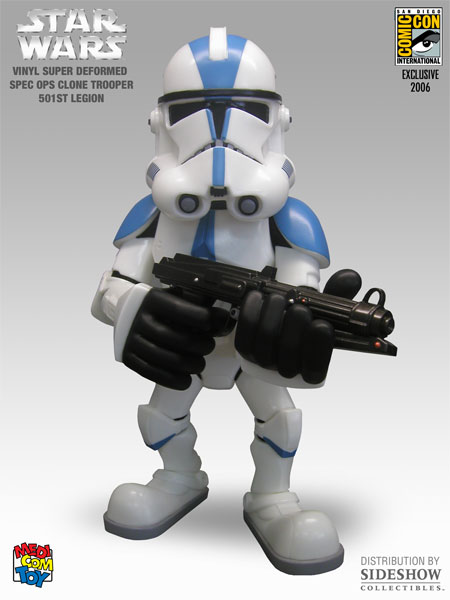 The 501st Clone Trooper stands roughly 8-inches tall, and the stylized caricature sculpture captures the menace, but cuteness, of the Episode III - Revenge of the Sith Clone design perfectly. The figure is highly poseable, and includes blaster. This exclusive Clone Trooper is decorated in the blue markings characteristic of the 501st Legion, Vader's Fist, the spec ops team that followed Darth Vader in the assault on the Jedi Temple.

The Sideshow Toy San Diego Comic-Con version of the Anakin Skywalker figure reveals Anakin at his most malevolent, with pale skin and fiery Sith eyes. The figure includes an all-new lava droid base, so that you can reenact the famous duel on Mustafar, and each figure is packaged in a red-themed Lords of the Sith box!

- Authentic likeness of Hayden Christensen as Anakin Skywalker from Episode III: Revenge of the Sith, with Sith eyes!


Within the heart of the Republic's favorite son, a growing firestorm is gathering strength. Anakin Skywalker's Jedi idealism has been tarnished by the corrosive effects of the prolonged conflict. The young Knight has seen death and suffered much in the long war. His duel with the would-be Sith assassin Asajj Ventress, and the dismemberment inflicted upon him by Count Dooku, have left him scarred, but his inner wounds are more extensive still. Misgivings and doubt, fueled by fear of loss and by pride, gnaw at Anakin. His secret love and for Senator Amidala and the child she carries fosters a growing resentment of the stark law of the Order, which forbids attachment. The fear of losing those he loves, a seed planted with the death of his mother and nourished by prophetic nightmares, now drives Anakin's actions. And ever in his ear, the soft deceptions of the Supreme Chancellor nourishes the young man's vanity, insidiously wilting his Jedi humility, burning a wedge between him and his dearest friend and mentor, Obi-Wan Kenobi. Is he not the Chosen One, the greatest Jedi to have ever lived? Why then, should he be bound by rules designed to limit his power?

As the war enters its final, dramatic days, the fiery turmoil within Anakin Skywalker burns stronger than ever. Tortured by his dreams of Padme's death, Anakin makes the ultimate choice and submits to Palpatine's insidious overtures, accepting the Chancellor's dominion in exchange for the dark side's power- the power to control his destiny and that of those around him- the power to end the war and remake the galaxy under his will.

The Jedi, those who have sought to limit and control him, now suffer the scorching of Anakin's fiery wrath. No longer a Jedi Knight, but a vengeful Lord of the Sith, Darth Vader leads an army into the Jedi Temple on a mission of murder and destruction, and none- not the brave, nor the mighty, nor the innocent- can withstand his coming. Friendship and loyalty will burn to stoke the fires of rage as the Sith take their revenge and the Empire is born.

Enchanted weapons, high-tech armor, and adamantium laced skeletons - just some of the unique items that are wielded by the denizens of the Marvel Universe. The Marvel characters are as well known for their costumes, weapons, and gadgetry as they are for their heroism and villainy. Sideshow Collectibles brings these iconic accessories to our universe with a line of miniature replicas, depicting the most memorable items used by the Earth's mightiest heroes and most infamous villains.

After a dangerous science experiment went awry and exploded, the brilliant but vain Victor Von Doom was left with scars across his entire face. Enraged by this deformity, which he blamed on Reed Richards, Doom secluded himself amongst a small group of Tibetan monks. There, he fabricated a suit of armor, to help him destroy the Fantastic Four and their leader, Richards. In his fury against the Fantastic Four and the facial scar, Doom demanded that the mask be put on for the first time while it was still red-hot, disfiguring him for life and fueling the burning hatred in his soul. Sideshow Collectibles and Marvel Comics are proud to present this 1:4 scale reproduction of Dr Doom's iconic mask and gauntlets, all cast in real metal and complete with a polystone display base reminiscent of Doom's laboratory. Each Dr Doom set is hand cast and hand painted, and individually numbered.

A real, live Martian super hero Goddess, resplendent in latex two sizes too small. Watch out! Here comes the ass kicking, Mortis killing, Lady Sham. One of two surviving sisters, Lady Sham and her sister Misty Slush travel the galaxy, fighting the evil Mortis and avoiding the law. A freedom fighter with an axe to grind and wife to the Martian Boy King, she fights robots by day and fantasizes about ringing Kitty's scrawny neck by night.

The Lady Sham statue is a faithful translation of Ashley Wood's delightfully offbeat artwork from the Popbot series. Each piece is cast in high quality polystone, hand finished and hand painted to exacting standards, and finished with a printed base that includes the hand-numbered edition. Lady Sham is packaged in a durable molded foam interior, with a beautiful display box featuring Ashley Wood's artwork. Limited to only 250 pcs worldwide!

Ashley Wood is an internationally acclaimed commercial illustrator, concept designer and comic book artist. He lives with his wife, his two sons and three cats in Perth, Australia. Ashley has been a professional illustrator for fifteen years and has worked for most major publishing and entertainment companies. Clients include: Dreamworks, Warner Bros, Sony, Konami, Vivendi International, Random House, Marvel Comics and Todd McFarlane Productions. Ashley's work has appeared in books, movies, magazines, comics, television and video games. He is a three-time Spectrum Award winner and a two-time Communication Arts award winner. His art is published worldwide on a regular basis and he has contributed to both joint and solo fine art exhibitions. Art books include, Uno Fanta, Dos Fanta, Tres Fanta and the compilation work Grande Fanta. His Popbot editions are also available in several formats and multiple languages.

12" figure display stand with a print of The Dead logo
Disclaimer: Zombies are not real. There is no such thing as the re-animated dead. Any sixth-scale representations of such are purely for entertainment purposes and are not meant to represent specific persons, situations, or intentions.