GI Joe
by Jay Cochran
October 12, 2011
IDW’s ground-breaking, multi-universe event returns in January with INFESTATION 2. As with the blockbuster original, this epic invasion will spread throughout the IDW-verse and into many fan-favorite titles. With INFESTATION 2, tentacled Lovecraftian “Old Ones” reach across time and space and threaten to destroy everyone everywhere and everywhen.

“Last year, we were just figuring out how to do a monstrous event for the first time,” said Chris Ryall, IDW’s Chief Creative Officer/Editor-in-Chief. “This year, we’re going to build on the monstrous part, both in terms of story, titles affected and the threat itself. So people can expect a bigger event here, with lots of legs. Well, tentacles, anyway. We’ve got great creators and a very exciting plan to give people more of what they liked the first time, with some crazy twists and new properties affected, too.”

Coming in January, the kick off issue, INFESTATION 2 #1, will be written by best-selling novelist and comic-book writer Duane Swierczynski and feature art by INFESTATION/INFESTATION: OUTBREAK artist David Messina. This gripping issue sets the stage for Lovecraft’s “Old Ones” to break through time and space and invade many titles, including TRANSFORMERS, DUNGEONS & DRAGONS, and a special fifth-week one-shot, INFESTATION: TEAM-UP, featuring Bat Boy and GROOM LAKE’s grey alien Archibald in February. Then in March, the Infestation spreads even further, infecting TEENAGE MUTANT NINJA TURTLES and G.I. JOE. In April, vampires battle zombies in 30 DAYS OF NIGHT: INFESTATION, followed by the stunning closing issue, INFESTATION 2 #2. 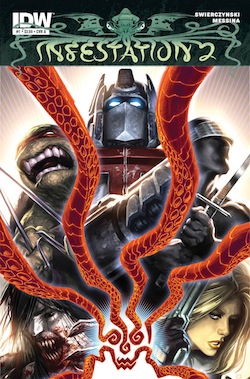 In February, writer Chuck Dixon and artist Guido Guidi will return to the often-requested “Hearts of Steel” timeline for the bi-weekly INFESTATION 2: TRANSFORMERS #1 and #2. Plus, Dungeons & Dragons novelist Paul Krill will introduce a brand-new campaign setting to IDW with INFESTATION 2: DUNGEONS & DRAGONS: EBERRON #1 and #2. INFESTATION 2: TEAM-UP will be written by Chris Ryall and illustrated by his WEEKLY WORLD NEWS partner Alan Robinson, and feature covers by Eric Powell and The Simpsons’s Bill Morrison.

In March, Tristan Jones and Mark Torres pair up for INFESTATION 2: TEENAGE MUTANT NINJA TURTLES #1 and #2, while Mike Raicht and Valentine de Landro present INFESTATION 2: G.I. JOE #1 and #2. INFESTATION 2 architect Duane Swierczynski and artist Stuart Sayger will explore the effect of Lovecraft demons on vampires in the INFESTATION 2: 30 DAYS OF NIGHT one-shot.

As a special bonus for fans, every issue of the INFESTATION 2 event will feature a connected cover by artist Livio Ramondelli, and IDW will be producing special incentive temporary tattoos with each issue, too.

Stay tuned to IDWPublishing.com as more creative teams for this epic crossover event are announced. Plus, readers can get a sneak peek at INFESTATION 2 by asking their local retailer about the INFESTATION 2 ashcan, coming in late November and featuring interviews, artwork and information about this momentous event. 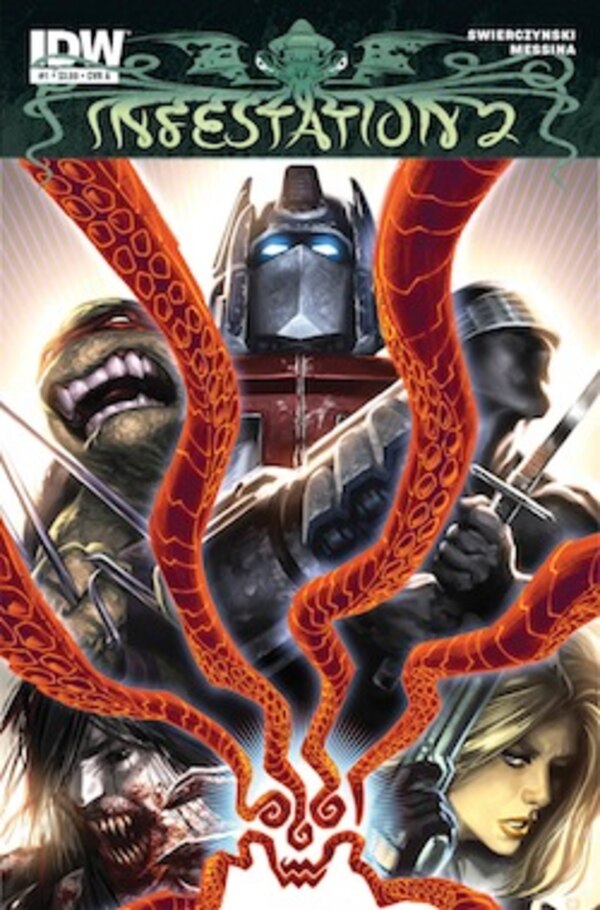