- Shortpacked.com -
We are proud to welcome David Willis and his weekly comic strip Shortpacked to TNI. For those of you not familiar with David's work, he specializes in comedic strips spoofing the world of toy collecting. Be sure to catch a new strip written exclusively for TNI every Sunday. You can catch more of his work on his own site, Shortpacked.com.

Seriously? What's not to get about it?

It's irony presented in the form of hypocrisy. Ethan says he's going to enjoy the things he already has, then quickly finds himself ogling a new toy. It's not a comment on toys or collectors; it's simply the most basic humor after slapstick. You could just as easily have Ethan proclaim, "Muffins are disgusting! I swear on my grandmother's grave that I will never eat a muffin again!" and then promptly show him cramming a muffin in his mouth.

The point of the strip is to emphasize Ethan's hypocrisy in a humorous way. Generally, when people are that adamant about not doing something and do it seconds later, it's funny. I know I chuckled.

But hey. Sometimes jokes don't click with people. Just thought I'd clear up what it's about.

I like shortpacked! I read his strip every day.

And yes, I get it. Compulsion.

I'm pretty sure thats his mouth because he is going "OOOOOO"

What are the two giant pimples on his face? I don't get that.

When it comes to Shortpacked, It stops being funny when you have to try and find the joke.

Because it's Shortpacked, It was never funny because there wasn't one.

We shouldn't have to figure out just what the point of the strip was.

Exactly. Like an addiction. I'd say he was perusing his collection downstairs (without going out) but he has a jacket on. That's all I have to go on.

rebuying charcters we have?

Eh I enjoy a lot of ihs stuff actually I just don't get this one :S 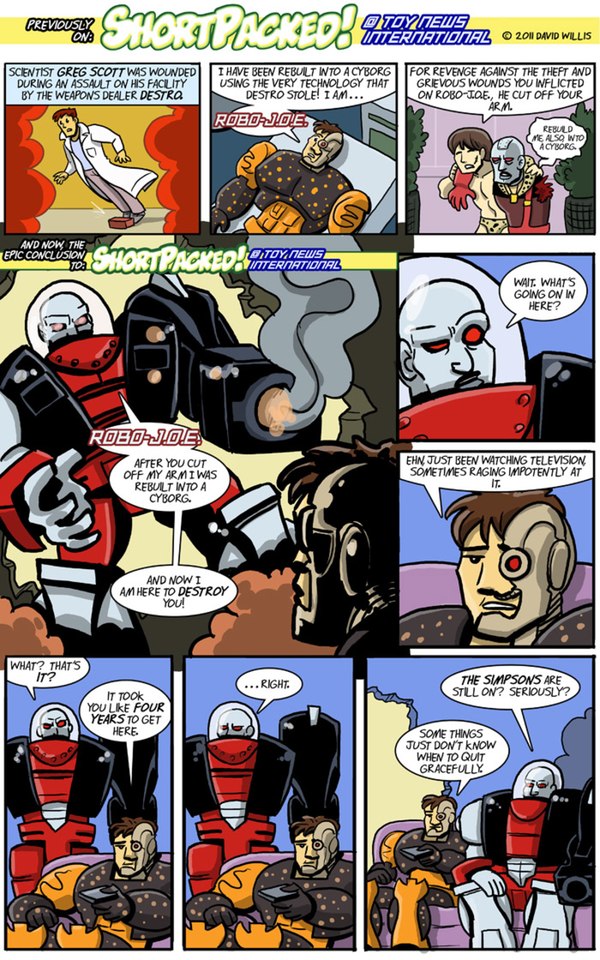