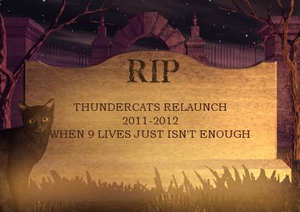 Though I don’t think this news comes as any major surprise to anyone, we know some fans had been holding out a glimmer of hope that the ThunderCats may still continue. Well, we have learned that the Bandai ThunderCats toyline is finished. Although no one was actually willing to go on the record to say as much, we have spoken to some knowledgable folks off the record who finally confirmed what we all feared and suspected since Bandai failed to show anything new at the 2012 New York Toy Fair last February. As to why, we are told that Cartoon Network opted to pull the plug on the new animated series on which the majority of the toys were based. I am told that Bandai had even been tooling new product when word came down the series was done. Despite some push to consider moving forward with a “Collector” focused line, the final decision was no more ThunderCats.

We reached out to Cartoon Network for some kind of explanation or confirmation on the status of the show, but at the time of this posting we have not heard from them. Back in August, the Network had told us that things were still in the works for the series, but that statement was contradicted by the series’ Art Director who said no one was working on the show. One likely reason for why no one is willing to go on record to definitively say these things are canceled is because that off chance someone could change their mind and decide to bring the show or even toyline back always exists, though in my opinion that doesn’t seem very likely at this point.

Bandai isn’t the only one who seems to have pulled the plug on ThunderCats. Back in October, the folks at Pop Culture Shock announced they were canceling their line of high-end statues based on the classic ThunderCats characters. Both their Tygra and Cheetara statues which had been solicited by the company have now been canceled. Jerry Macaluso from Pop Culture Shock had posted over on Statueforum.com that they needed to see a minimum of 200 Tygra statues pre-ordered for them to move forward and that they didn’t even come close to getting that.

It’s unclear if other companies that have been putting product out for the ThunderCats brand such as Mezco who were doing 14” roto-type figures based on classic ThunderCats characters will continue, but for the most part it looks like the re-launch of those 80‘s heroes from Thundera is done for now.