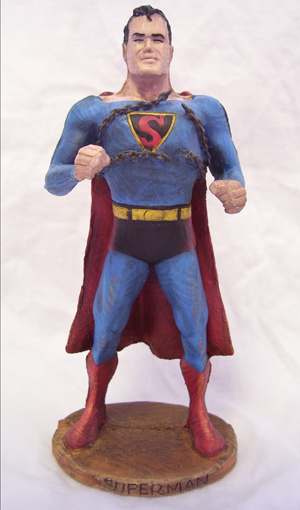 In an exciting collaboration, Dark Horse Comics and DC Direct, DC Comics' action figure and collectible company, are teaming to create a new series of vintage-style statuettes featuring four of DC Comics' best-known characters. Modeled after products that were popular in the 1930s and 1940s, the four new statuettes being produced by Dark Horse are designed and manufactured consistent with earlier "syroco"-style figures. This new line is scheduled for monthly release starting in February 2007. The first of the statuettes will feature a classic rendition of Superman.

The sculpting and packaging design is inspired by the art style of original Superman artist Joe Shuster, and echoes the look and feel of his earliest comic appearances. Produced in a limited edition of hand-numbered copies, the figure is fully painted and ready to display. Batman will be the second release, followed by Wonder Woman and The Flash. For each, the style, costumes and other details will be consistent with the original "Golden Age" look of the character from the comics of that period.


"This project is a dream come true for me," Dark Horse Comics President Mike Richardson exclaimed, "and I want to thank my friend Paul Levitz of DC Comics for making it possible. Dark Horse and DC have collaborated on many publishing projects, but this is the first merchandise crossover we have ever done. It is gratifying that DC Direct has acknowledged our unique product category, especially since they have done such a fabulous job with these characters on their own."

"Dark Horse has established a unique creative approach with this line of statuettes that I along with their many collectors have enjoyed," said Georg Brewer, Vice President -- Design & DC Direct Creative. "Our creative collaboration makes perfect sense given the historical roots of this style and significance our characters from that time."

The DC Comics series will depict the characters as they were originally presented in the comics, but also will deliberately be somewhat more rough-hewn than is common, with features including non-slick surface textures, visible seam lines, and other slightly "distressed" aspects.

The new series maintains the packaging style and special features of the previous Dark Horse series, but affords collectors the opportunity to start with the first release. Each hand-numbered statuette comes carefully packaged in a custom-tooled, full-color, litho-printed tin box. Also included is a small booklet about each character and a vintage-style pinback button of the character.

"We have worked hard to create a superior package for these very special items," Dark Horse Product Development head David Scroggy remarked, "and we think we have met the challenge with help from our manufacturing team and of course the creative and licensing team at DC Direct."

The first releases are Superman (February 2007), Batman (March 2007), Wonder Woman (April 2007), and The Flash (May 2007). The initial release is arguably the most beloved character ever created for comic books, Superman. Since his debut in 1938, the orphan from the planet Krypton has claimed a status of one of the best-known fictional characters of all time. The Man of Steel's heroic adventures are a part of our cultural tapestry, and the intent of this project is to recall his earliest days.