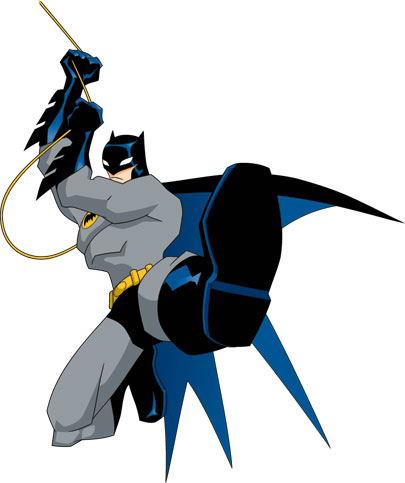 Whipping on the cape and pulling down the cowl…Bring On The Batman. Based on the famed DC Comics super hero and the most complex and intriguing character in comic book history, this innovative, all-new series melds the renowned character’s extraordinary physical prowess and super-sleuthing skills with a new range of experimental Bat-gadgets and an amped-up Batmobile.

The Batman picks up his story in year three: in his mid-twenties, just finding his way as protector, defender and Dark Knight, while balancing his public persona as billionaire bachelor Bruce Wayne. Heir to a multibillion dollar fortune and honorary CEO of Wayne Industries, one of the most influential research corporations in the world, Bruce is considered a kid among the suits. Although stylishly dressed, he’s the "guy with no tie” and projects an image so laid back that no one suspects the obsessions he has after the sun sets. 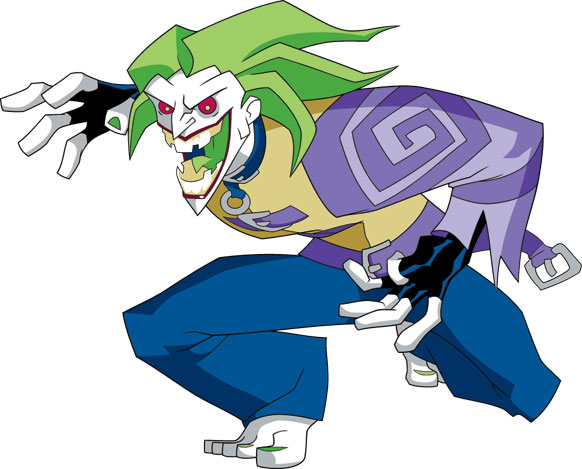 Dwelling under the cloak of darkness and cradled in the Batcave, resting beneath a souped-up, hipster’s loft-style pad on a hill overlooking Gotham, Bruce is consumed with fighting crime as the masked vigilante The Batman. A mysterious figure rarely glimpsed by the average citizen, and the last guy any criminal wants to bump into, he is witnessed by few except the lowlifes he defeats and leaves for a baffled and understaffed Gotham Police Department.

Living in Gotham, a metropolis where shadows run long and deep beneath elevated train tracks and within a 150-year-old drainage system, this younger Batman will confront updated takes of familiar foes—meeting each member of his classic Rogues Gallery for the first time, including Joker, Penguin, Catwoman, Mr. Freeze, Riddler and Man-Bat, among others. The war on crime jumps to the next level with a new arsenal at the Dark Knight’s disposal, all operated and linked by an advanced remote-controlled invention he dubs the “Bat-Wave.” 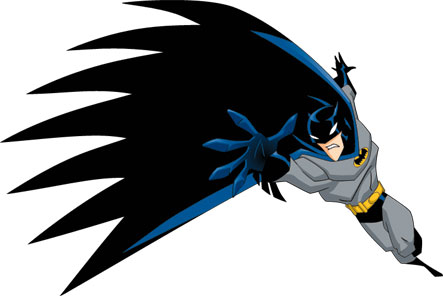 Our young Dark Knight, who thought he had everything under control, has to face new challenges using his wits as much as his gadgetry. He must step up and take on this new lethal breed of super villains—and learn to become a super hero.

The Edge from multi-Grammy Award-winning sensation U2 composed and performs the series’ theme song. 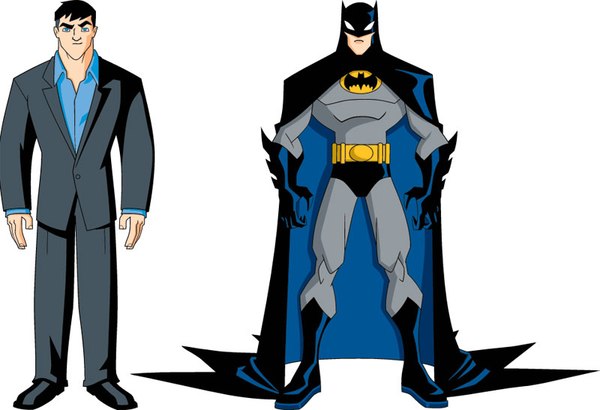 Only in his third year, pre-"Bat Signal," The Batman currently operates as a vigilante. Under the cape and cowl can be found a younger Bruce Wayne in his 20s. The media is more likely to catch him courtside at a Gotham Gators game or strapping on a helmet to drive his own racecar for a charity than in front of City Hall cutting a ribbon. But don't confuse the swinging bachelor persona for the real Bruce – he's intense, driven and completely focused on his life's mission to serve as the Dark Knight. Aided by technology he's secretly developed – including the operating system known as the Bat-Wave – and driven by the childhood memory of the loss of his parents, Batman takes to the streets in order to bring Gotham's new breed of super villains to justice.

The arch nemesis of The Batman, Joker is a maniacal harlequin whose bizarre appearance and unerring instinct for the absurd have earned him a reputation as "the most dangerous criminal in the annals of crime." For Joker, each transgression he commits is an elaborate joke in which he tries to leave his victims dying with laughter - literally. More than any other enemy, Joker becomes inextricably linked to The Batman, as the crazed clown's plots begin to take increasingly more personal tolls on our crime fighter.

Within the confines of his role as butler to the Wayne estate, Alfred raised Bruce and, on occasion, continues to provide him with veiled wisdom. Like The Batman, Alfred is younger, in his early 50s, and more physically robust, yet not quite the unflappable Alfred of usual Batman lore. The cape and cowl are new enough that Alfred is still growing accustomed to them. Thus, we witness his genuine concern for Bruce’s safety when Bruce goes up against the likes of Joker, Penguin, Mr. Freeze and the will of the Rogues Gallery.

Grange, the mayor of Gotham, is a close friend of the Wayne family. A shrewd politician, he nonetheless buys into the irresponsible bachelor image Bruce cultivates, creating some grief for the young billionaire.

If Bruce Wayne could call anyone his best friend, Ethan Bennett is it. They've been friends since high school. Whereas his partner, Detective Ellen Yin, sees things in black and white, Ethan sees the grey in most everything – and is more willing to allow The Batman to co-exist with the Gotham P.D. In fact, he often finds himself pondering if this caped vigilante he is chasing is actually helping the city.

Multitalented actor Steve Harris has been nominated twice for an Emmy Award as Best Supporting Actor for his impassioned portrayal of partner Eugene Young on “The Practice.” In addition, Harris won the 1998 and 1999 Viewers for Quality Television Award for Best Supporting Actor in a Drama and was again nominated for that award in 2000. He was also nominated for the NAACP Image Award for Outstanding Actor in a Drama Series from 1998-2001, winning the award in 2004. Other television credits include “Law & Order,” “New York Undercover,” “Murder One” and “Chicago Hope.”

Harris’ motion picture credits include the Steven Spielberg-directed feature film “Minority Report,” as well as “The Rock,” “Sugar Hill,” “The Skulls” and “Bringing Down the House.”

Born and raised in Chicago, Harris earned a graduate degree in theatre from the University of Delaware. After graduation, several theatre roles led to a guest-starring appearance in the debut episode of “Homicide: Life on the Street” and to a breakthrough role in “Against the Wall,” a docudrama about Attica.

A seasoned stage actor, Harris has earned critical acclaim for his off-Broadway performance in “Heliotrope Bouquet” and in the regional productions of “Macbeth,” “Richard III,” “Julius Caesar” and “The Great White Hope.”

Detective Ellen Yin is as physically adept as any male cop she knows. Ellen may be new to the Gotham beat, but she's no rookie. Previously head of her department in Metropolis, she transferred to Gotham looking for new challenges. She’s a career cop at the top of her game, true blue and by the book. Not warming to Bruce Wayne so easily, Ellen doesn't have it out personally for The Batman. It's simply cut-and-dried. As a vigilante, he's breaking the law. Not seeing past his swinging billionaire persona, she despises his seemingly silver-spoon arrogance.

For Chief Rojas, The Batman is nothing less than a black eye to his police force. Believing there is no room for vigilante justice in Gotham, Rojas has made capturing the Dark Knight a top priority.

Oswald Cobblepot, like Bruce, is an ostensible billionaire in his 20s – but the similarities stop there. Unlike Bruce, "Ozzy" is rude, selfish, arrogant and homely – a grotesque penguin-bodied character – essentially, the “anti-Bruce!” While Gotham’s other villains may have it out for The Batman, Cobblepot is unique in that his scorn is often directed at Bruce Wayne, who serves as a constant reminder of everything Cobblepot is not. Employing the use of highly trained birds and an arsenal of deadly umbrellas, Penguin, as he calls himself, is determined to rebuild the Cobblepot fortune by criminal means.

Catwoman, a.k.a. Selina Kyle, is Gotham's greatest cat burglar. She gets her name not only because of her profession but also because of her cat-like qualities. Cunning, stealthy and mysterious, she is neither super hero nor arch villain. Unlike most of The Batman's foes, Catwoman is not out for mass destruction or domination of Gotham. She's in it for the money…and the thrill of the hunt. She has even been known to do the occasional good deed – when it's in her best interest. Despite The Batman's efforts to capture her, Catwoman seems to enjoy her encounters with the Dark Knight, proving to be a flirtatious rival.

Mr. Freeze is a villain who uses his ice technology as a means of stealing the objects of his passion: the rarest, most valuable diamonds. Formerly Victor Fries, Mr. Freeze is a ruthless criminal who The Batman thought had met his demise in a cryogenic accident that reduced the villain's body temperature to that of neither living nor dead, creating a walking cryogenic monstrosity! Ice, in all forms, has become his obsession – along with making Gotham Mr. Freeze's very own Kingdom of Ice!

Look for The Batman to premiere this Saturday September 11th at 10:30 A.M EST, on the KidsWB.