Star Trek is Back with New Electronic Ships from DST

Star Trek
by Jay Cochran
September 17, 2012
Art Asylum has been making electronic Star Trek ships since 2001, when they first made toys for the TV show Enterprise, including an electronic NX-01. Since then, Art Asylum has moved on to other Star Trek shows, including The Original Series and The Next Generation, and even feature films, and their miniature Starfleet now includes ten different models, all with lights and sounds. Lately, the line has been on hiatus, but AA partner Diamond Select has undergone a refit and is ready to start producing new ships again! The next two to be released are movie ships -- the Enterprise-B and a Klingon Bird of Prey!

One of the most fan-requested Star Trek ships, the Excelsior-class U.S.S. Enterprise NCC-1701-B starship is finally on its way! Based on the ship's sole appearance, in Star Trek: Generations, the Enterprise-B features authentic sounds and dialogue from the film, as well as light-up weapons and engines. The ship measures 16 inches long and comes with a Starfleet-insignia display stand.

The Klingon Bird of Prey, as seen in multiple feature films, is their first non-Enterprise ship in the line. This version is based on the unnamed ship commanded by Admiral Chang in Star Trek VI: The Undiscovered Country, which could fire while cloaked, and it features authentic sounds and dialogue from the film, as well as working lights. With its massive wingspan, the Bird of Prey measures 12.5 inches long by 19 inches wide, and the wings can move up for a landing approach or down for attack mode! Comes with a Klingon symbol display stand.

Expect both ships to hit stores closer to the end of the year. What's more, most of the older Star Trek ships have been put back into production, with release dates ranging from fall to spring of 2013. Check with your local comic shop or your favorite online retailer to see what's available!

Visit comicshoplocator.com to find the nearest comic shop.
Image 1 of 2 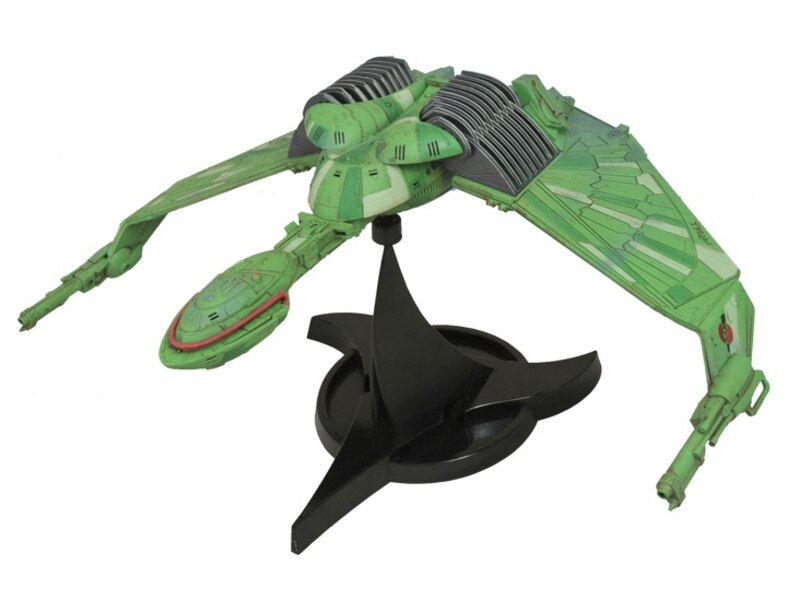