NECA
by Jay Cochran
June 22, 2009
NECA's own Randy Falk was on hand at this past weekend's Wizard World Philadelphia convention where he showed off several lines in a slideshow presentation and announced a few new ones to fans.

For Street Fighter fans Randy announced that series 2 with Akuma, Chun Li, and Guile would be hitting shelves in July and that later this fall they plan to release two sets of repaints depicting the characters in their alternate color scheme that appear in the game. One of these sets will be exclusive to Toys R' Us.

For Gears of War fans look for this series to start focusing on the "Dark Corners" expansion with both Marcus and Dom getting new figures in Theron disguises. Also included in this next wave will be a Grenadier Elite and a Grenadier Flamethrower and will be hitting shelves in July.

In other Gears of War releated news, Randy introduced for the 5th series of figures Col. Hoffman and Boomer along with a new line of vinyl-inspired figures called Batsu. The first wave of these will focus on the Marcus and Dom characters from Gears of War with future wave looking to include characters from TMNT and Street Fighter. The Gears of War wave will be out sometime in August.

Along with Batsu, fans of Termintator can look forward to the second wave of T2 figures hitting in August which will include Cyberdyne Showdown T-800 comes complete with grenade launcher, chain-gun, and shotgun, while the Final Battle T-800 will come sans arm and with two different heads of varying damage, along with several weapon accessories. A 12" version of the Final Battle figure will also be released, and will come complete with LED lights in the head so the endoskeleton eyes will be illuminated.

Twilight fans will be happy to know that NECA will be doing a new wave of figues based on the "New Moon" sequel and include the characters of Edward, Bella, Alice and Jacob.

For New licenses Randy made the announcement that NECA would be doing a line of figures based on the video game BioShock. First first series which is slated to hit shelves in October will include the Big Daddy Bouncer the Big Sister, Big Daddy Rosie, Splicers, and the Big Daddy Player from BioShock 2. Though no images were made available Randy mentioned this line would consist of some of the most complex figures to date for the comany and that they were massive. Look for a first look at this later next month at San Diego Comic Con.

Finally two other new licenses that were announced were for the video games Dante’s Inferno and Army of Two. Though Randy said these lines were quit a ways off he did reveal that Both Salem and Rios would be included in the Army of Two set, and the figures would have multiple points of articulation, a bunch of weapons, and masks that would lift to reveal the actual character’s faces. NECA is also planning some exclusive variants with different paint jobs on the masks like players could unlock in the game. 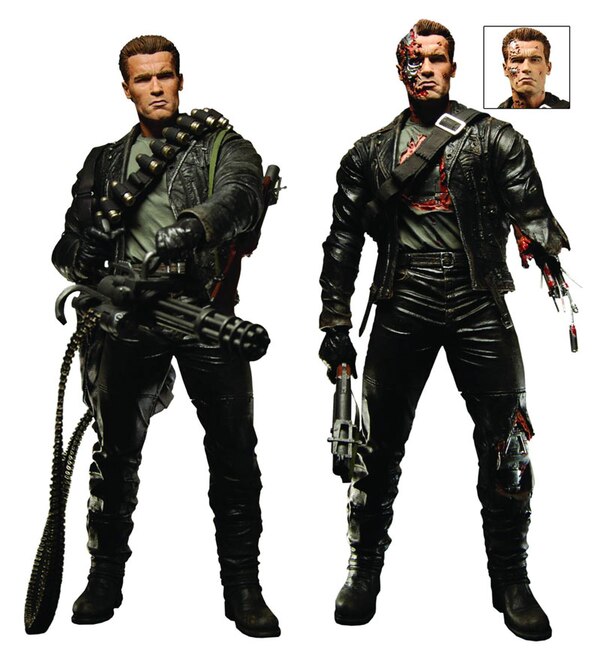 about time we'll be getting some real Big Daddy figures, i wonder if they'll each come with a little sister

Akuma, Chun Li, and Guile, Col. Hoffman and Boomer, Cyberdyne Showdown T-800 12" version of the Final Battle figure & Alice and Jacob will all be mine.

Hey Randy Falk, where are the TMNT wave 2? You guys said at NYCC that they would be out this year. It's been awefully quiet @grumpy@

Can't wait for Army of Two.

Dante's Inferno will be cool...as long as NECA make A LOT of figures. Not just the main dude.

a friend of mine will be all happy with the bioshock figs. as for my part, yyyyyyyeeeeeeeeeeesssssss an extra head for a terminator figure. finaly i can switch it with that ugly scarred mc farlane figure. happy that i kept it all these years. do you guys think that neca did this on purpose? i mean, the extra head is the exact head for this figure.

I hope there will be video game figs for Dark Void and Damnation.....

Hey Randy Falk, where are the TMNT wave 2? You guys said at NYCC that they would be out this year. It's been awefully quiet @grumpy@