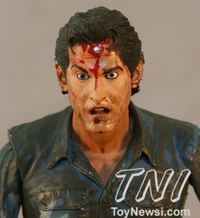 NECA celebrates the 25th Anniversary of “Evil Dead II: Dead by Dawn” with the release of some new 7” action figures. Today we take a look at their “Farewell To Arms” Ash figure.

Packaging - NECA uses that clear plastic packaging, the kind you used to find with the Toy Biz Marvel Legends figures. It’s great for viewing the figure in the package but a pain in the butt to actually open. You likely will want to use a pair of scissors or a knife to cut it open. Inside the package is a thin paper-like backdrop that can be removed. The figure is held in place with twisty ties. The Evil Dead 2 logo is at top with the name of the figure towards the bottom. The back contains a brief description of the figure along with a picture of it and other figures available in the series. If you don’t open your figures this is good packaging for displaying the figure unopened, but I never liked this kind of packaging with Marvel Legends and don’t particularly like it here. It is just too much of a pain to open.

Sculpt - NECA typically is known for having nicely sculpted figures, and this is a good representation as to why. The head sculpt depicts a young Bruce Campbell nicely with the psychotic crazy look. Overall the figure has a lot of detail from the shredded pant leg to the tiny buttons on his shirt. For the main part of the figures shirt, NECA uses a soft rubber material giving it a loose-fitting look and feel. On the back of its waist, you can even see under the shirt some.

Packaging - The figure, like all of Mattel’s MattyCollector lines, comes in the standard white box with the MOTUC logo and figure’s name. The word Grayskull appears at the bottom of the box, but I don’t know if this has any significant meaning. Overall, I think NECA does a nice job with the paint applications for this figure. They do a really nice job with the blood-soaked shirt as well as the making his skin on his hands and face look really dirty. The only thing I don’t like as much is the glossiness of the blood used on the figure’s face which causes a shiny look on his forehead.

Articulation - This figure has basic articulation giving it a varied amount of possibility. It contains around 16 points of articulation which certainly doesn’t put it on the same level as a Marvel Legends figure, but good enough to put it in some decent poses. NECA also does a nice job of hiding the joints on the figure so they don’t stand out. The figure has ball-jointed shoulders, swivel ankle and wrists, limited up and down head movement, elbow joints, swivel thigh joints and swivel waist joints. The figure is limited in how you can pose it in any kind of seated type position because of the way the leg joints are cut. In short, I certainly wouldn’t categorize this figure as super-posable, but it isn’t a statue.

Accessories - The figure comes with a shotgun, cutoff zombie hand, and interchangeable lower arms, one with a stump for a hand and the other with a removable zombie hand. You also can remove the hand on the right arm.

Fun Factor - To me, this figure is made more to be posed on a shelf than to be played with, but that’s not to say you can’t come up with some good zombie fighting poses for your Ash figure. If you are a fan of the Evil Dead series, then I think you definitely will enjoy this one.

Check out our GALLERY of detailed images for this figure below and let us know what you think of it. 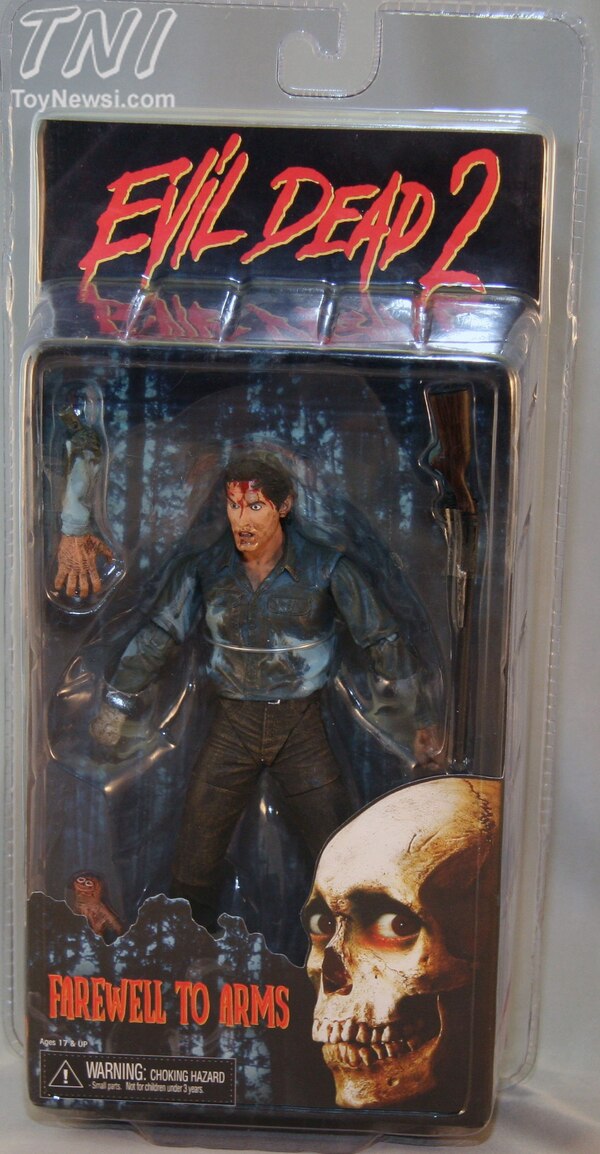 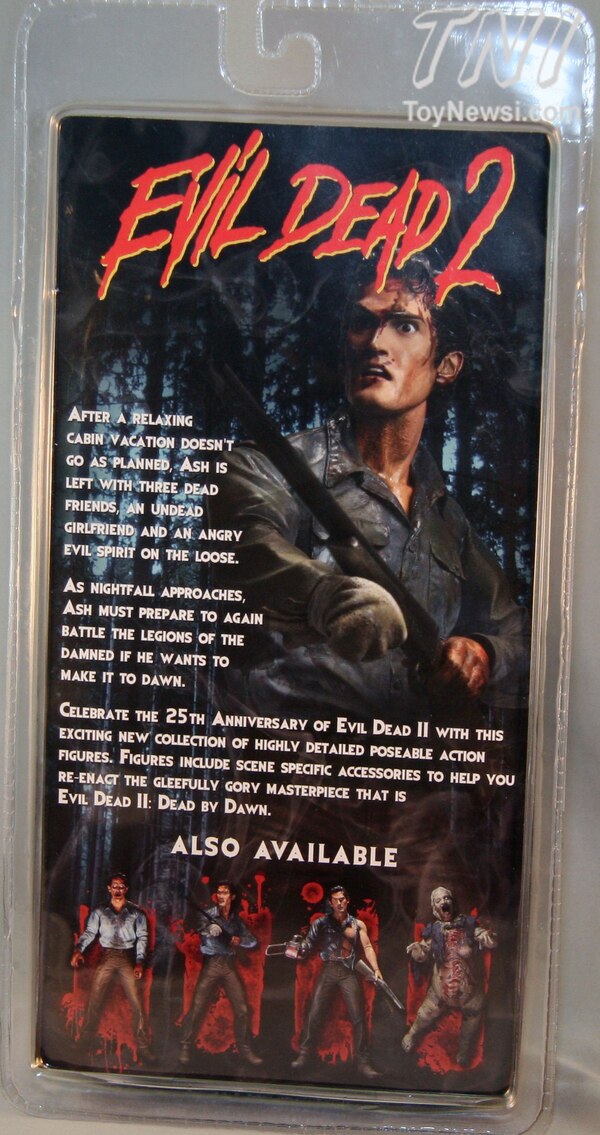 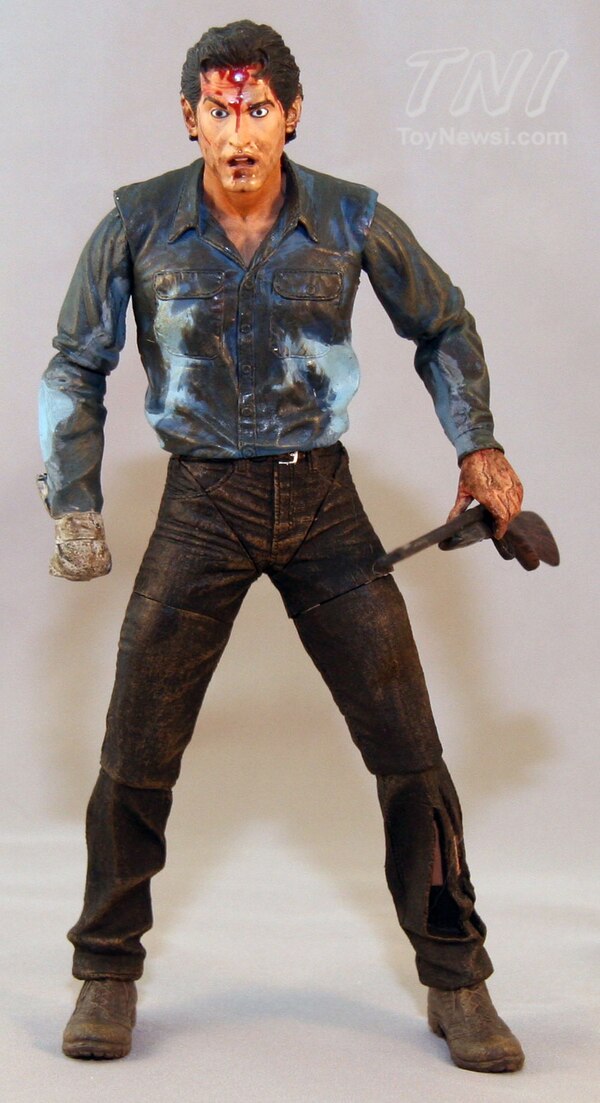 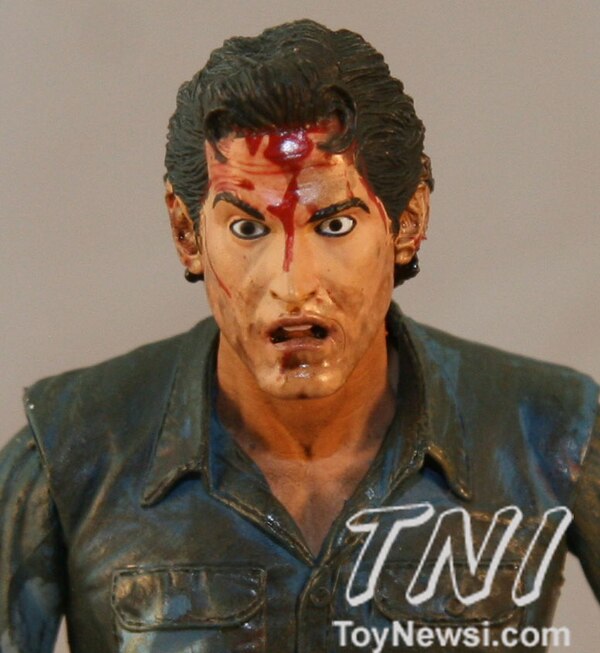 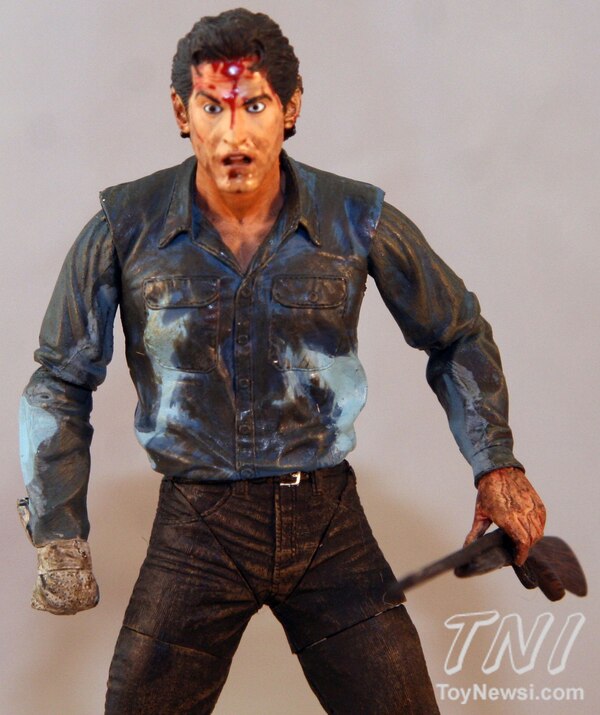 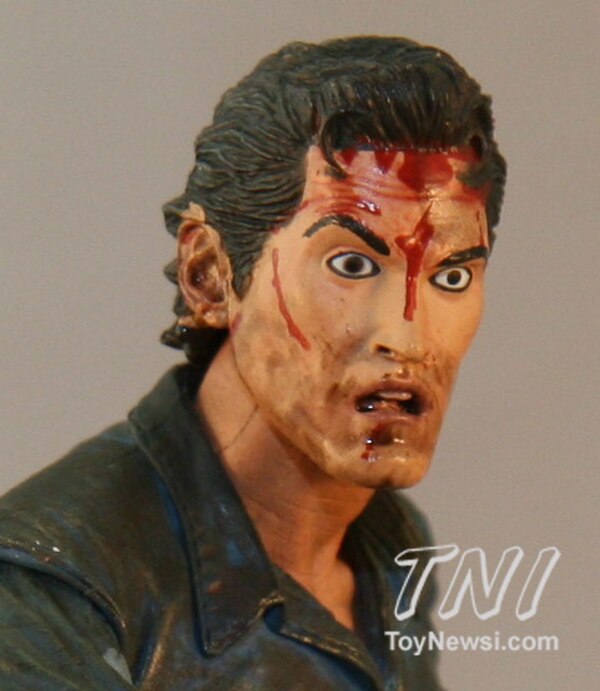 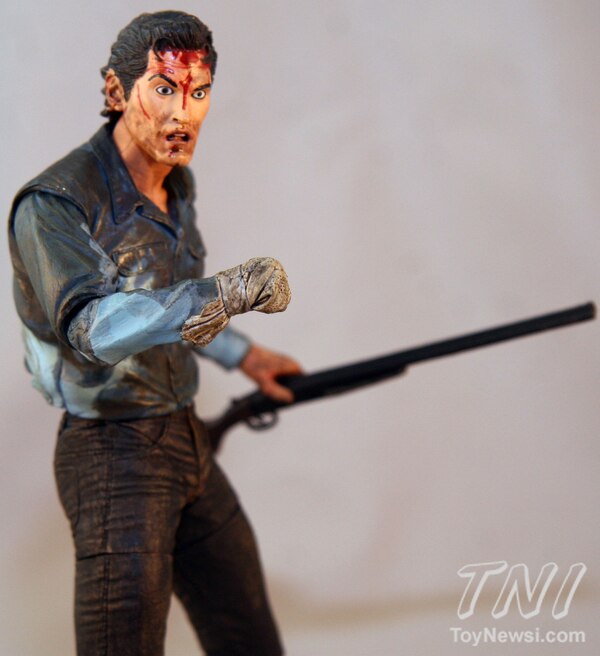 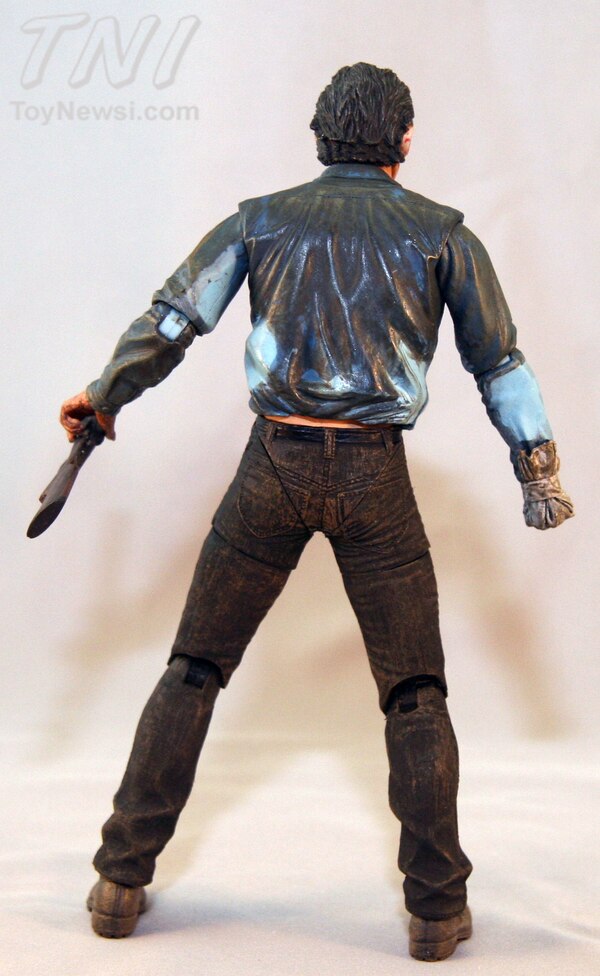 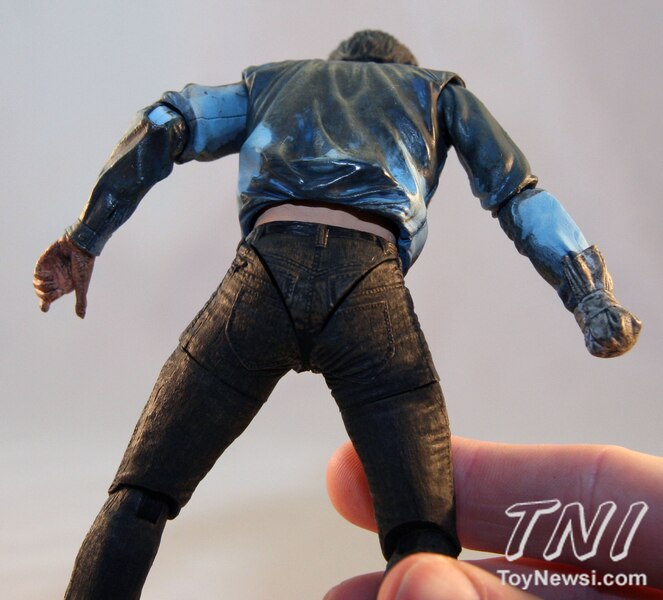 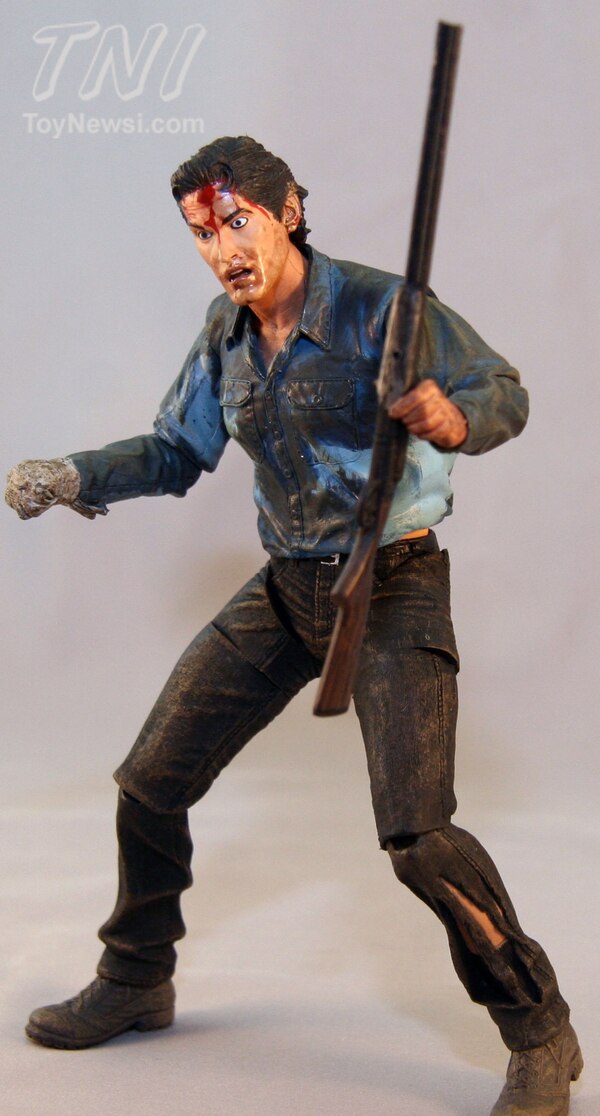 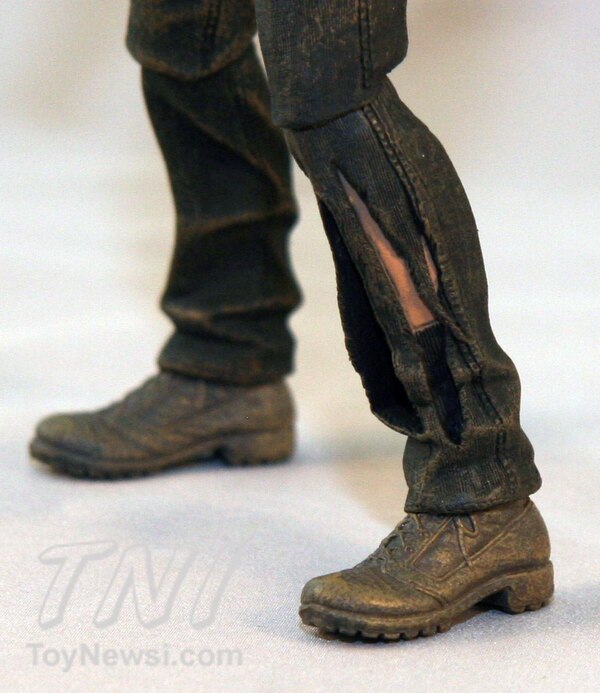 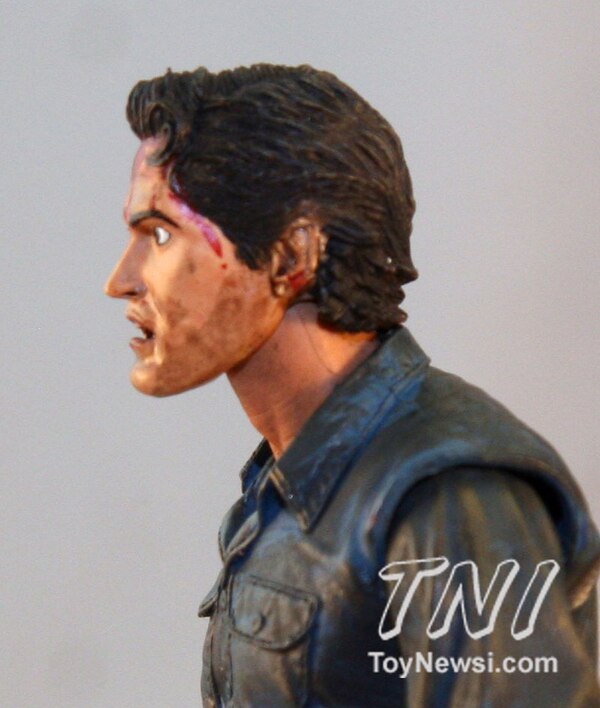 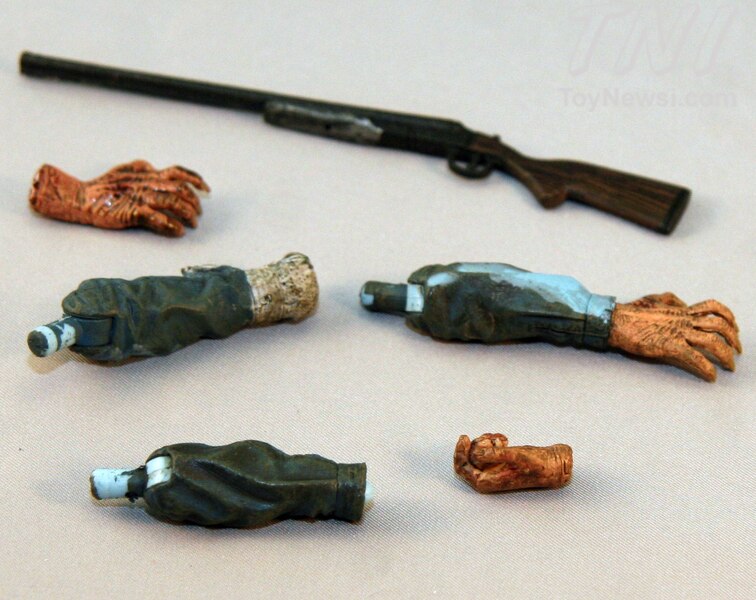 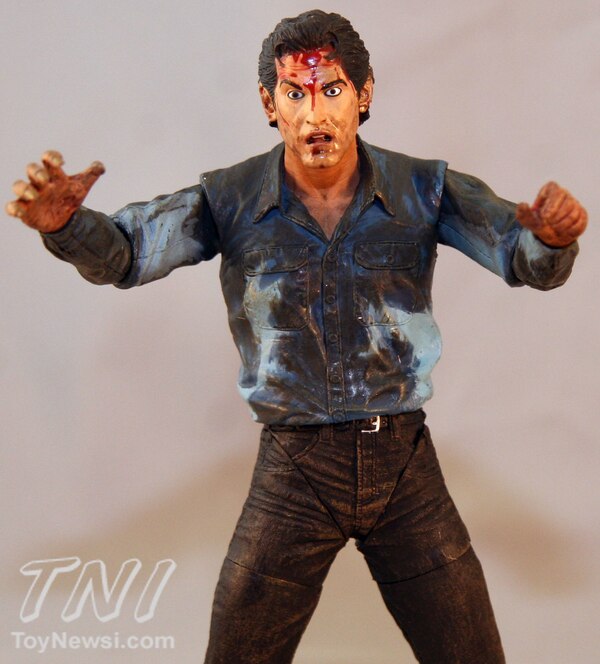 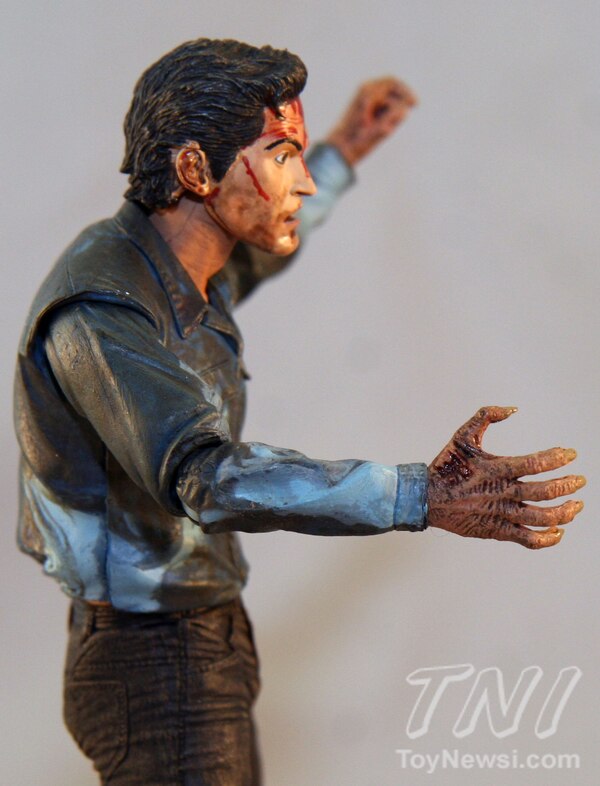 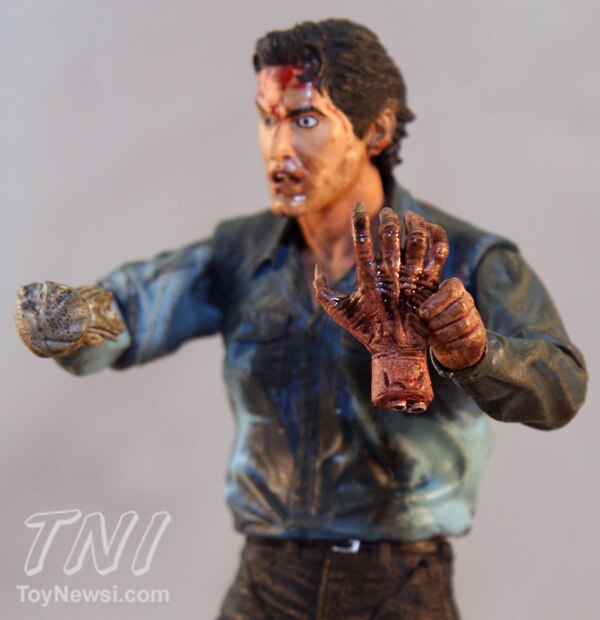