Following up on our first arcade game-based #TMNT figures, we turn to the second Turtles game!

From the classic 1990s Turtles in Time video game, we’re excited to offer a new line-up of 7” scale action figures. Series 1 includes Donatello, Leonardo, Slash, and a Foot Soldier. Donatello, Leonardo and Foot Soldier come with signature weapons and a brand new hoverboard with display stand that can be used for even more poses. The evil mutant turtle Slash comes with sword accessory.

All feature special deco that recreates the pixilated look of the video game and come in individual window boxes with graphics from the original arcade cabinet. 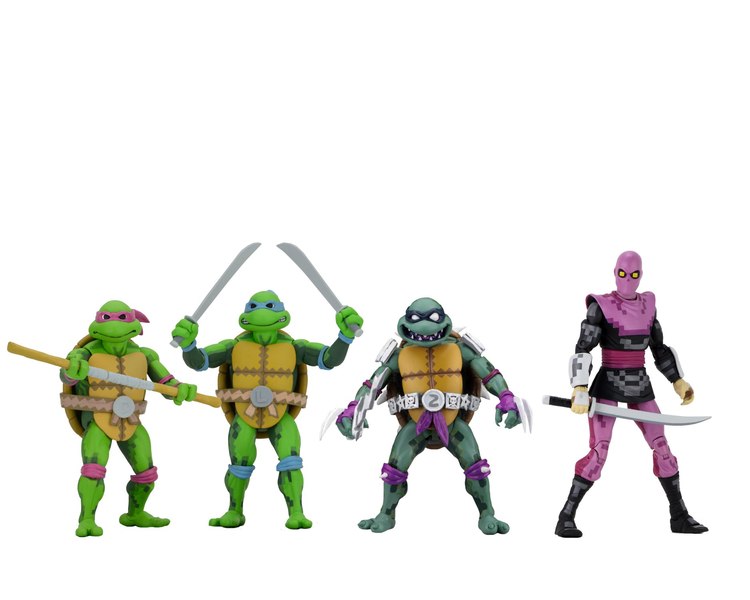 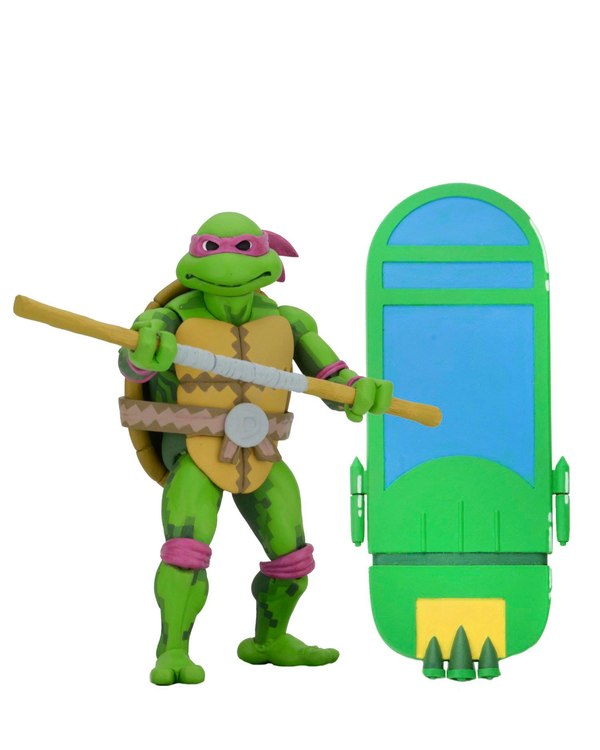 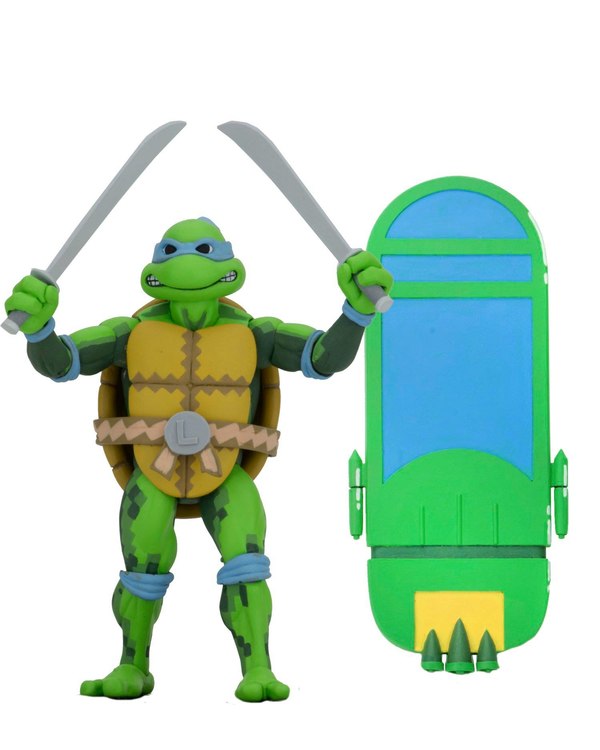 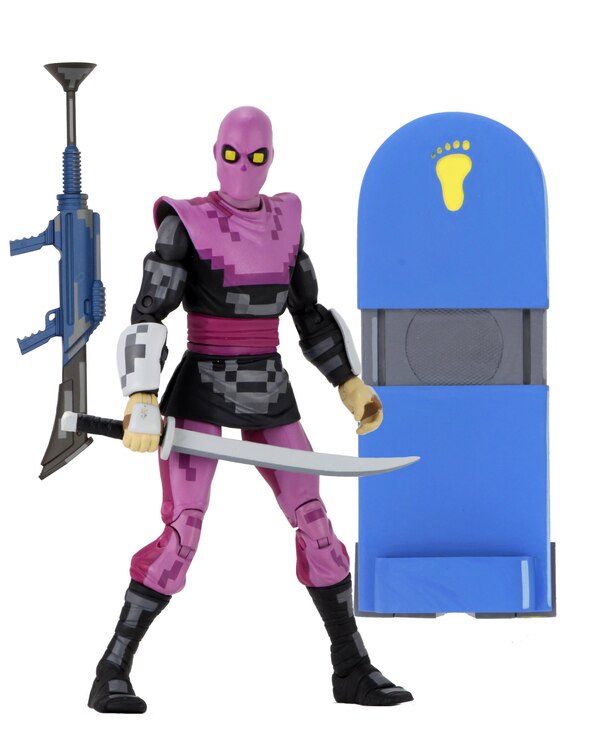 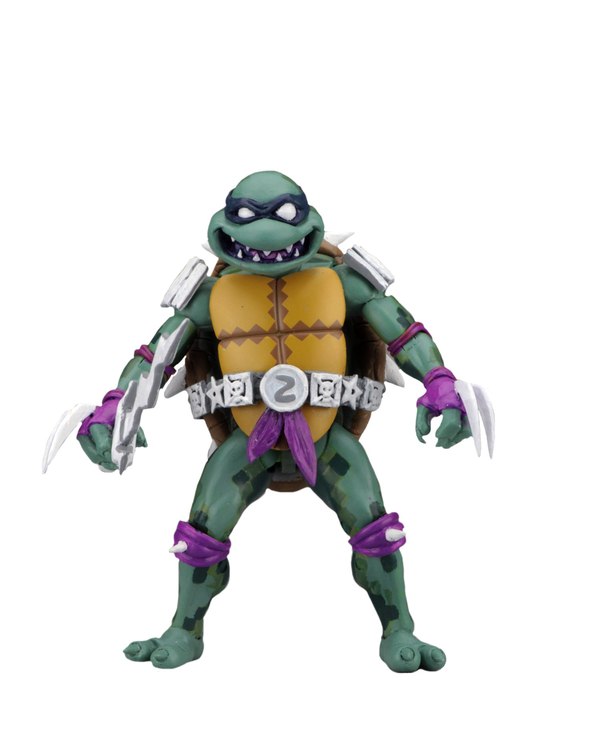 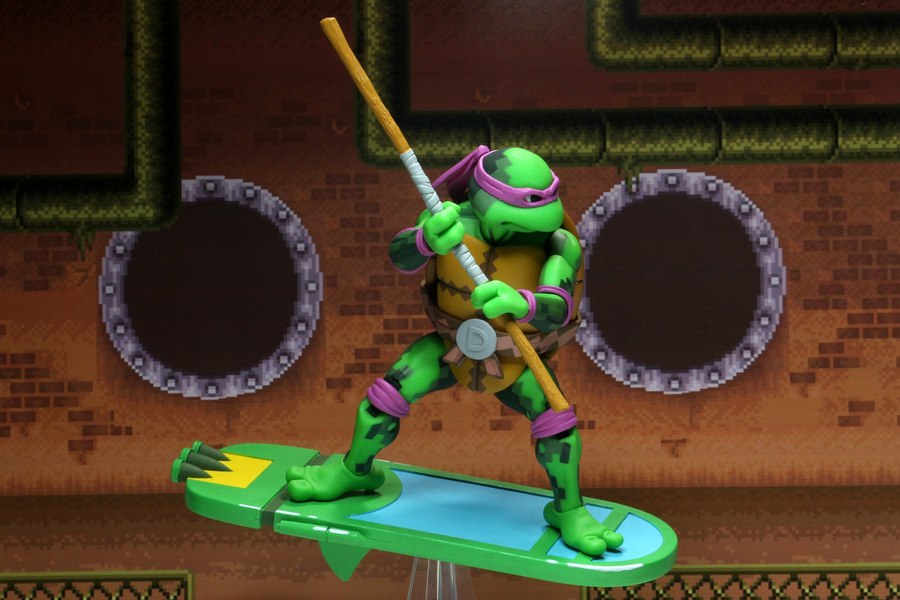 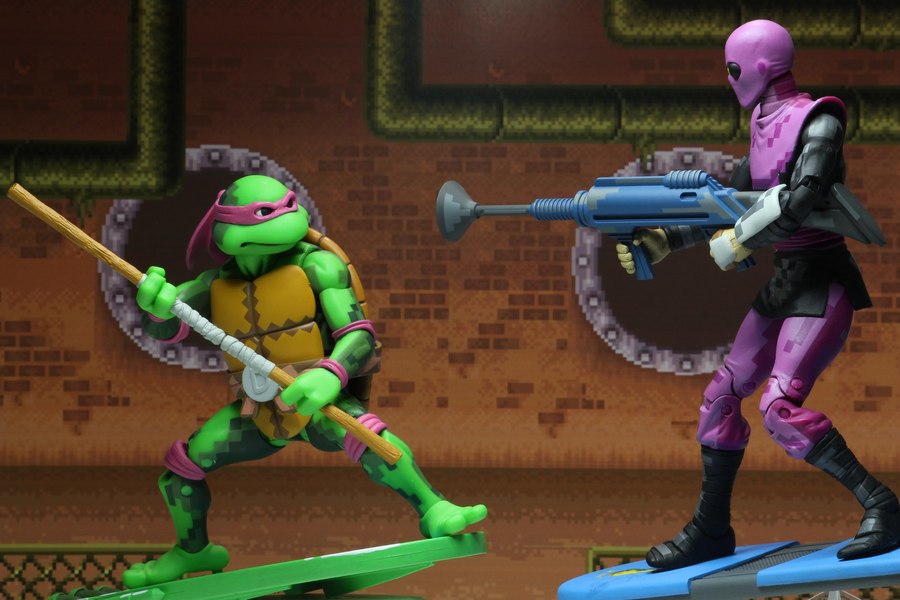 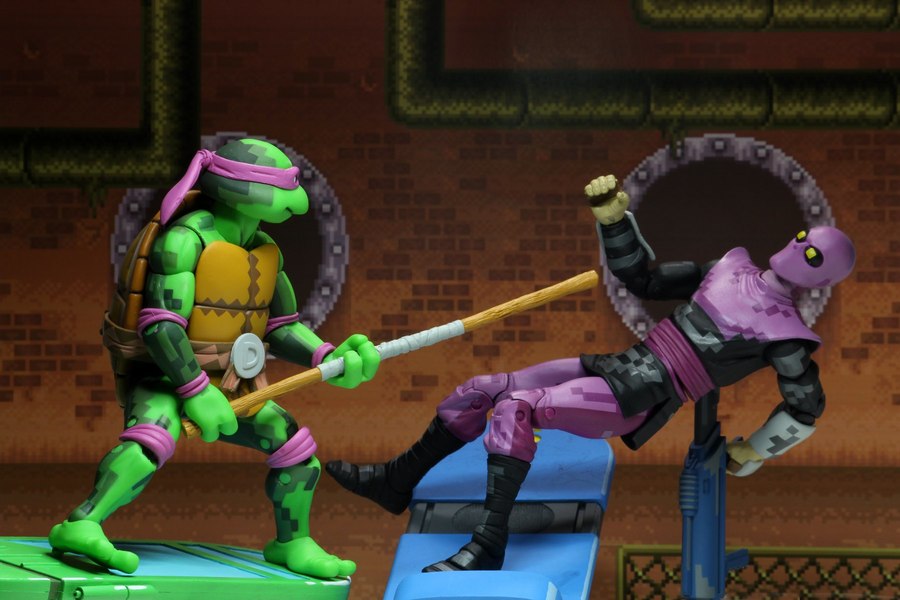 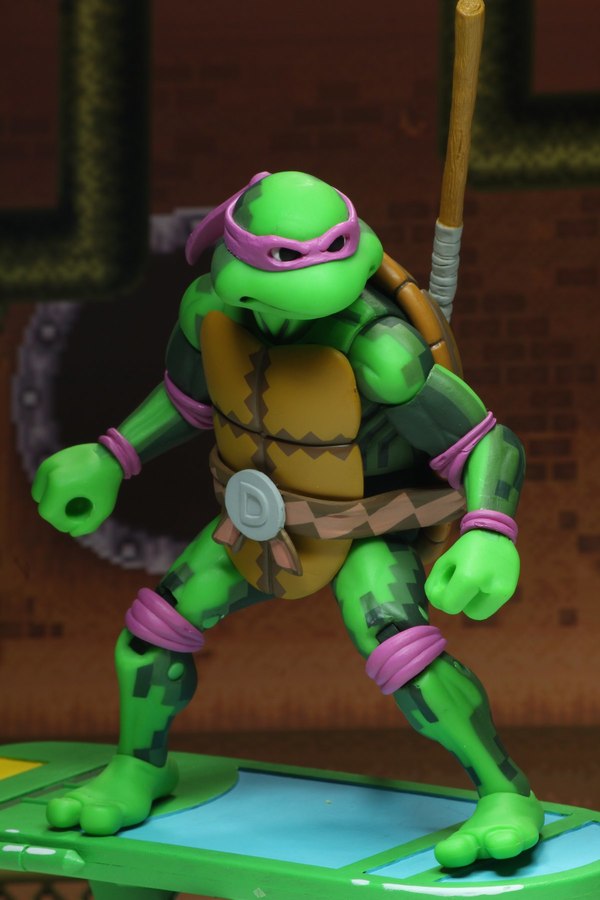 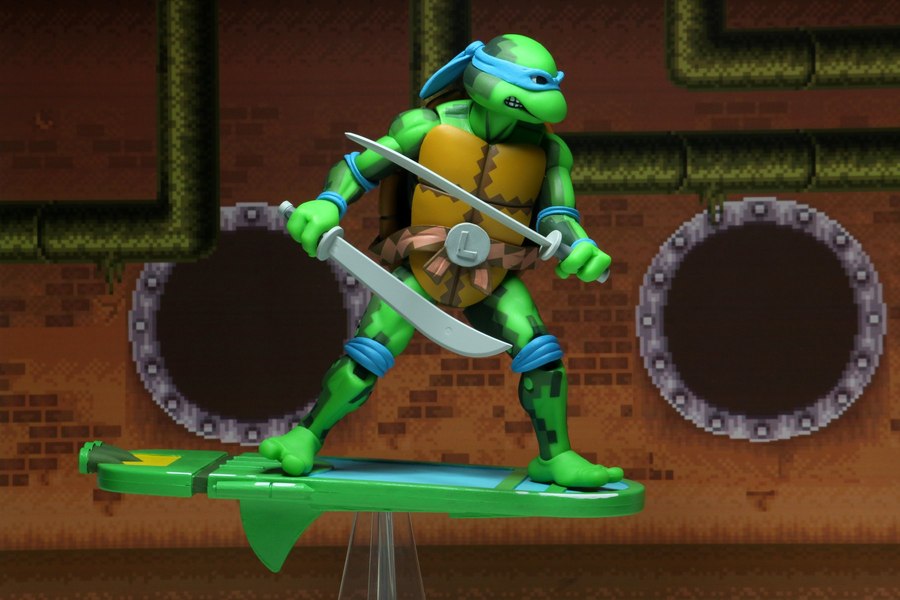 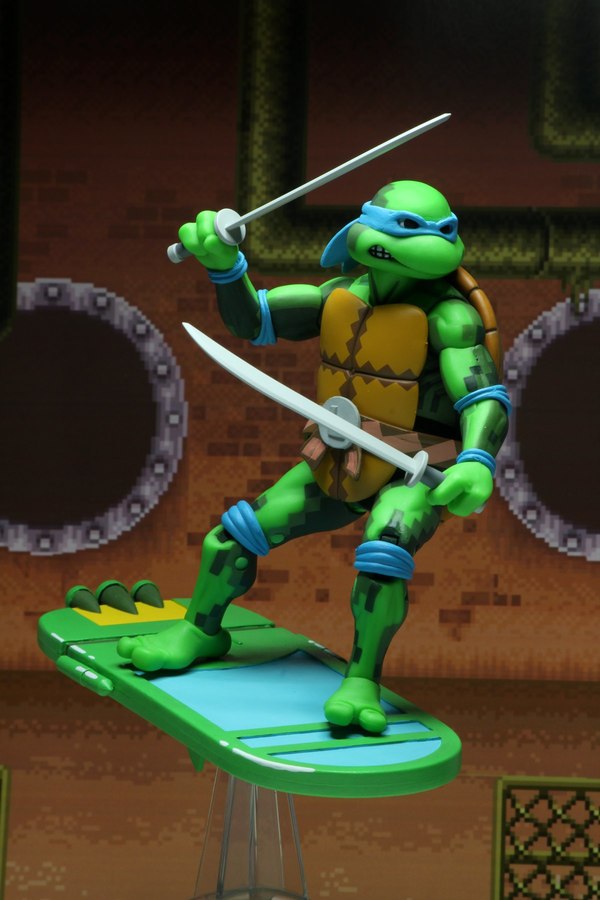 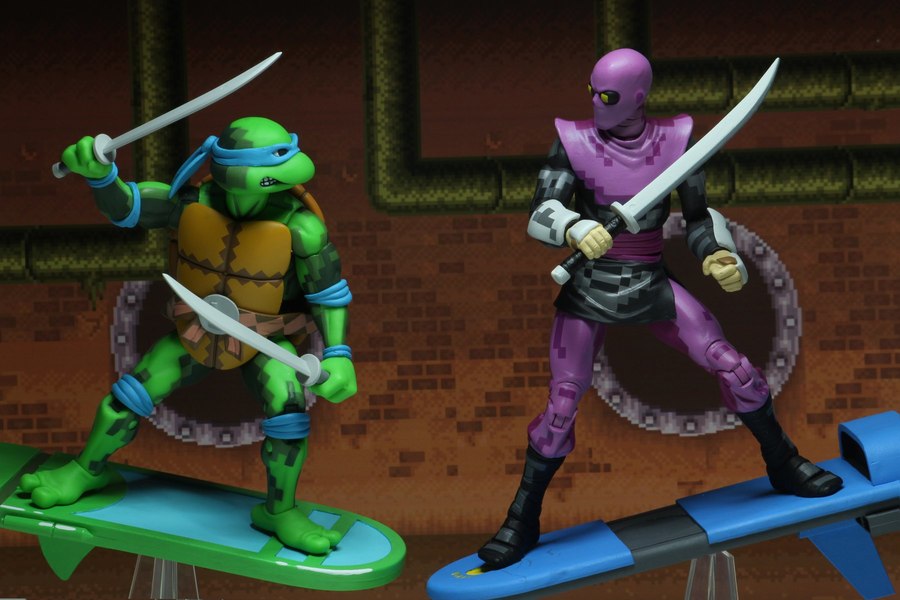 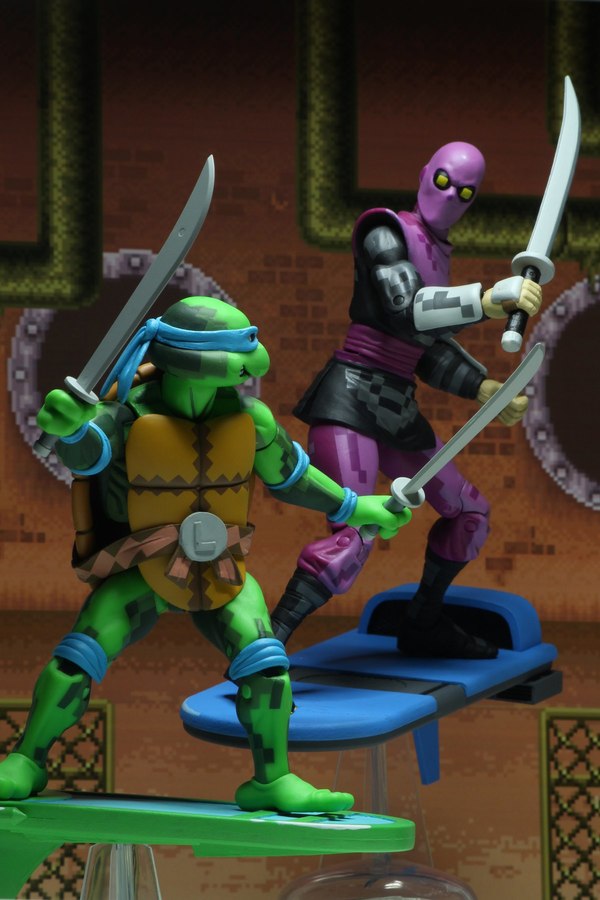 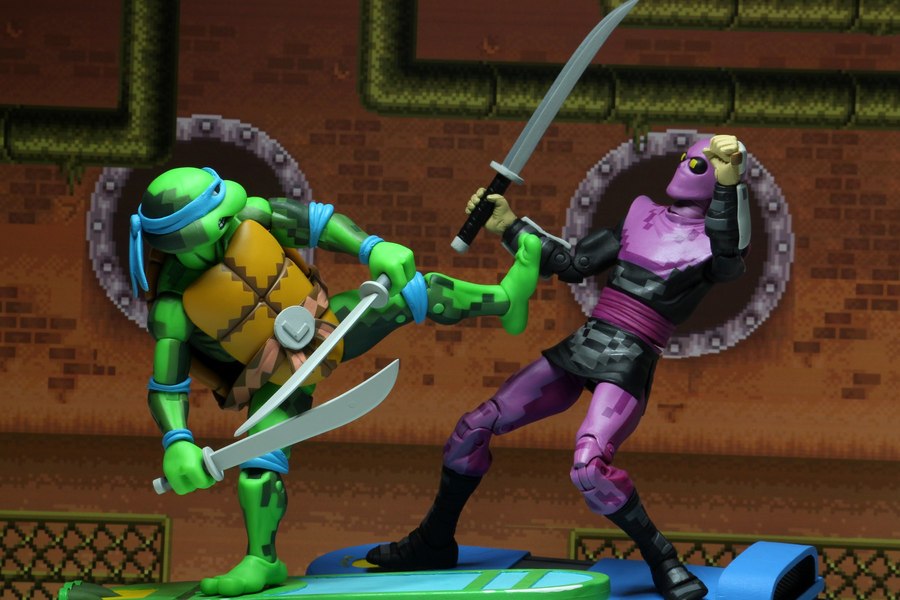 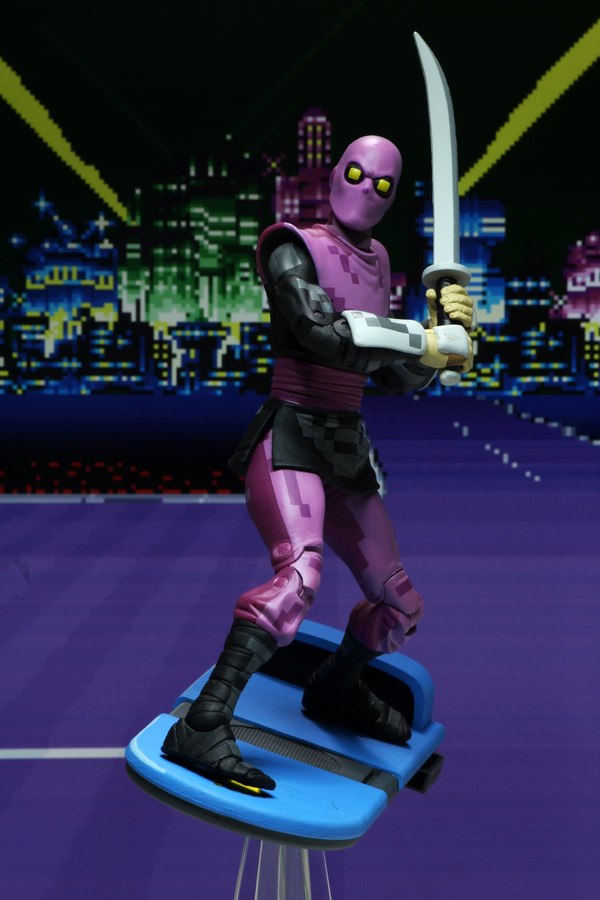 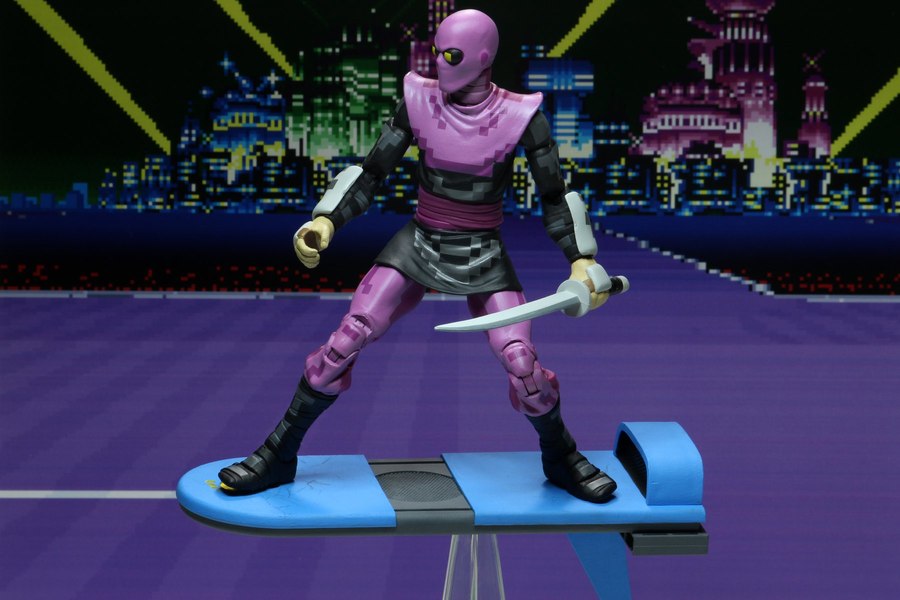 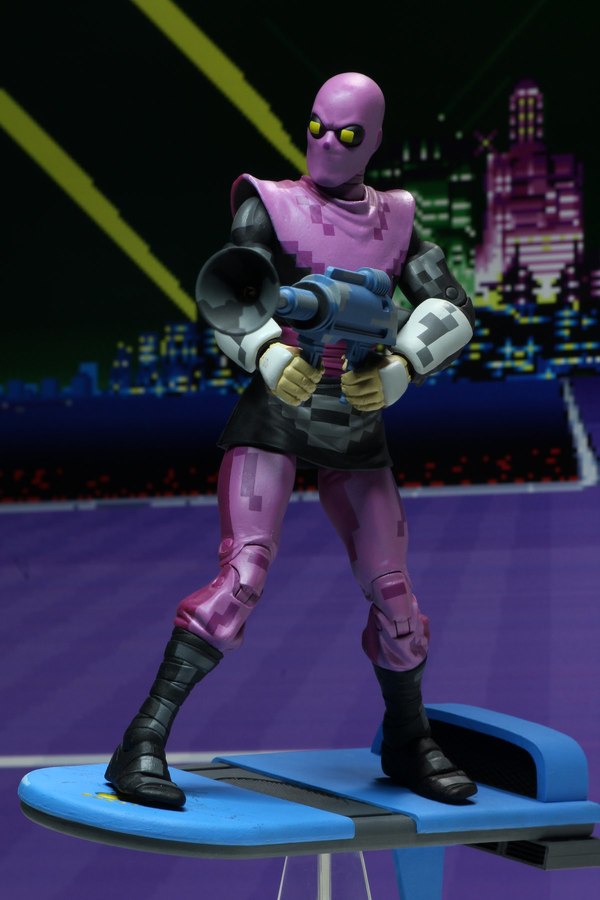 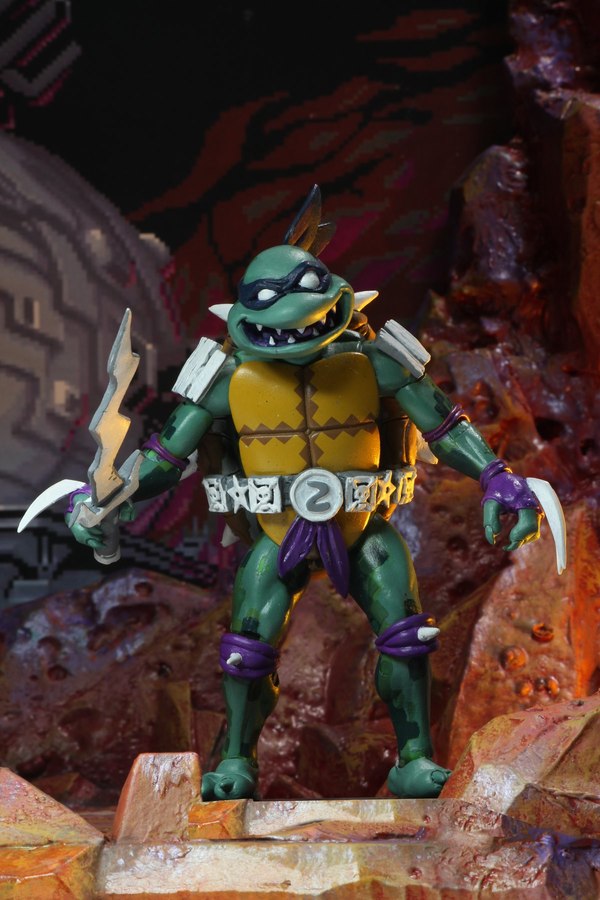 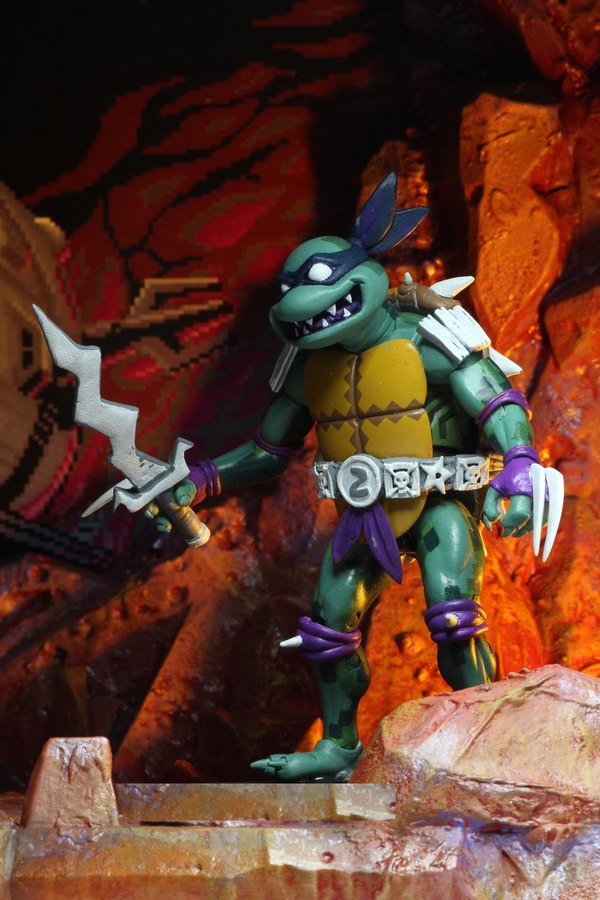 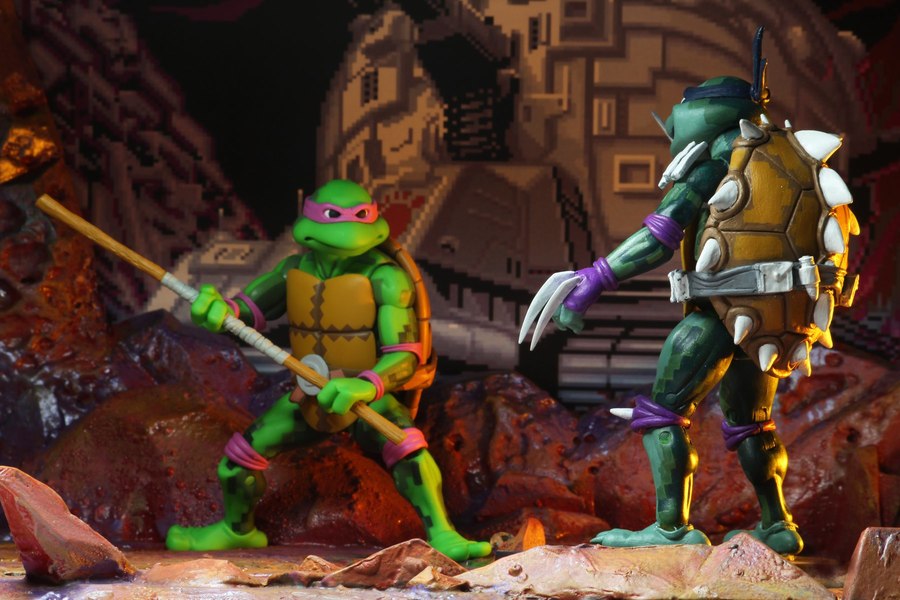 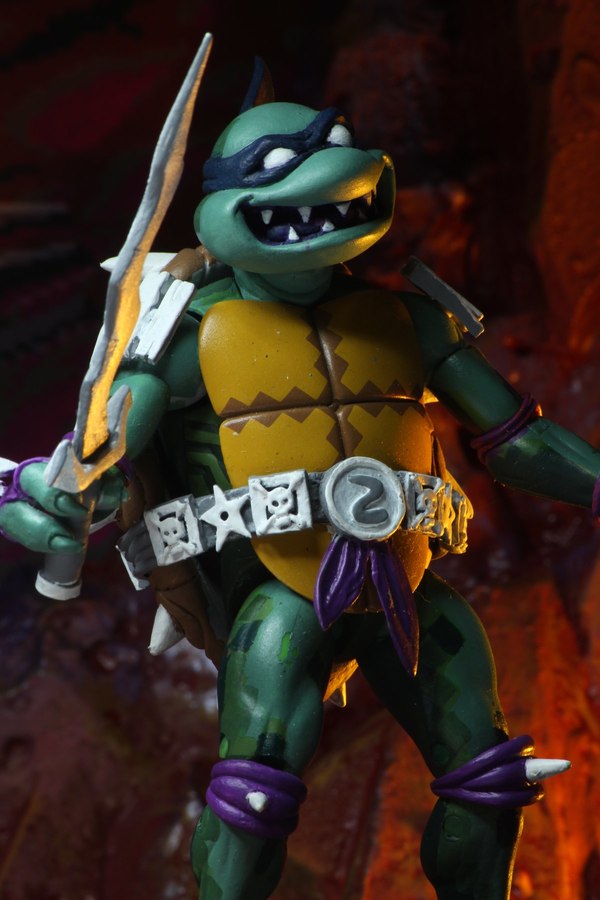 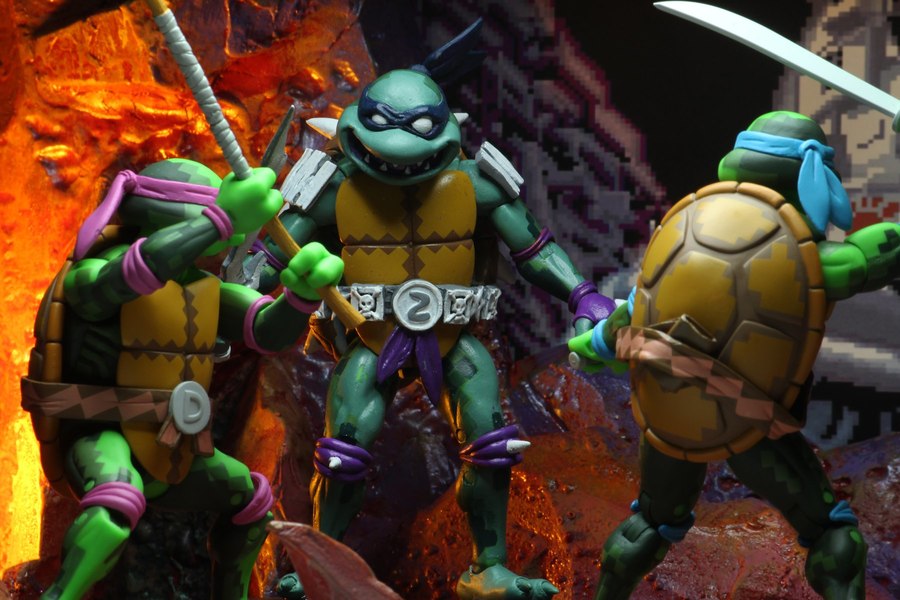 I hope more Slash comes out for pre-order. I missed out on Dorkside. It was in my cart but I didn't pay fast enough. Bummer.

Its good news that these will be available pretty much everywhere because the other 6" turtles have been impossible to find in the wild, Ive heard neca is planning on restocking the Gamestop and Target figures, hopefully those will be easier to find now as well, neca is doing a great job with this line its a shame their distributors havent been up to speed with them.

Definitely a fan of the game designs on the turtles.

A little update on the new TMNT figures:

Are you ready for our first #SDCC2019 announcement?Following up on our first arcade game-based #TMNT figures, we turn to the second Turtles game!From the classic 1990s Turtles in Time video game, were excited to offer a new line-up of 7 scale action figures. Series 1 includes Donatello, Leonardo, Slash, and a Foot Soldier. Donatello, Leonardo and Foot Soldier come with signature weapons and a brand new hoverboard with display stand that can be used for even more poses. The evil mutant turtle Slash comes with sword accessory.All feature special deco that recreates the pixilated look of the video game and come in individual window boxes with graphics from the original arcade cabinet.Shipping Date: November 2019Available ONLY at Mom & Pop stores and Specialty stores

I really like these figures but Neca has to either up their production on these or make these figures available more widely,the Target 2-Packs have been a hassle to find in stores and the Gamestop Movie Turtles were a mess with their distribution (I understand Neca has little to do with how the stores sell them but having more product available would make them easier to find) Hopefully with the new deal Neca is making to distribute figures worldwide itll mean these tmnt figures will be easier to get our hands on.PS. @JayCif you,@ShartimusPrimeor @PixelDantalk to the Randy and the rest of the Neca guys at SDCC could you please ask them about the whole thing with the Worldwide Distribution deal,Thanks.

(Sing-song) San Diego Comic Con is almost here and I can't take it no more. OH! I hope of all my questions get answered but I'm sure I'll be surprised.

So...they're going to be showing off video game Slash for a third Comic Con in a row? I hope they say when they're actually going to release the figure this time.

NECA today released a couple images showing off upcoming 6" TMNT figures ahead of the 2019 San Diego Comic Con which kicks off tomorrow evening with Preview Night. One of the figures is Slash which we got our first look at a few weeks ago during an event NECA was in attendance at. That figure is said to be part of a 2-pack being released as a Target store exclusive later this year.

The second image is of a FOOT Clan Soldier with that digitized arcade type look. This along with the Turtles apparently will be released as a special VGA line for the specialty market comprised of individual figures sold in assortments. Unique figures like Slash and Super Shredder based on the game models will be released as well.We should be seeing more of these and more as well as getting specific details during Comic-Con. Check back tomorrow and throughout the week for complete coverage of the event including a look at all of NECA's new reveals.

Yeah my dude, it seems that Neca will continue releasing all this TMNT stuff only as exclusives for a while.

Yes, Super 7 is making TMNT and at Toy Fair Brian promised to reveal them at San Diego. Pixel Dan made a speculation video about the Super 7 TMNT with his guesses being based on the Playmates toys versions so white eyed turtles with different skin colors & possibly orange colored accessories. Although it's not confirmed; it was just his thoughts.