McFarlane
by Outsiders
March 29, 2013
The second series of action figures based on Microsoft Studios and 343 Industries latest major game title - Halo 4®will be hitting stores this fall! Just like Halo 4 Series 1, this line brings fans all-new, never-before-seen characters, weapons, accessories, and vehicles from Halo 4 to your figure collection. Each highly detailed figure will stand approximately six inches tall and include an average of 25 points of articulation.

As an added bonus, each figure will also include a unique code that unlocks exclusive Halo 4 video game content…More information coming soon!

No needed to pull out your replica Plasma Rifle…Here is the official line up for the second series of Halo 4 action figures!

MASTER CHIEF
Our latest action figure of John-117, the Master Chief, features an all-new weapon, debuting for the first time in Halo 4: the Asymmetric Recoilless Carbine-920; better known as the Railgun. The ARC-920 Railgun is a compact-channel linear accelerator that fires a high-explosive round at incredible speed, delivering both kinetic and explosive force to hard and soft targets alike.

As an added bonus, the Master Chief also comes with a free Micro Ops figure of Cortana. Perfectly in scale with our other Micro Ops figures, Cortana also works as an accessory to our standard six-inch figures. Cortana can be removed from her base and held in a figure's hand, just as she's often seen throughout the Halo video game series!

ELITE RANGER
The Elites are back in Halo 4, including the popular Ranger variant as depicted in Halo: Reach. Elite Rangers feature a fully-sealed environment suit and an airtight helmet with clear visor; perfect for extra-vehicular activity in the vacuum of space. Our Elite Ranger figure comes with the redesigned, Halo 4 version of the Beam Rifle.

STORM JACKAL
The Kig-Yar, commonly known as Jackals, return in Halo 4 as part of the alien Covenant that continues to threaten humanity and the UNSC. The Storm Jackal features the new, more sinister look seen in Halo 4. Figure includes the redesigned version of the Covenant Carbine weapon.

SPARTAN SCOUT (RUST)
The fan-favorite Scout armor, previously seen in both Halo 3 and Halo: Reach,, returns in an updated, yet instantly recognizable form for the Spartan-IVs of the UNSC Infinity in Halo 4. Our Spartan Scout figure features a rust paint scheme, and comes equipped with the new Sticky Detonator weapon; previously only available with the Master Chief in the UNSC Cryotube boxed set.

SPARTAN C.I.O. (VIOLET)
An all-new Spartan armor type making its debut in Halo 4, the Spartan C.I.O. is distinguishable by its unique helmet with three optical sensors. This brand-new Spartan figure is clad in violet armor and comes with the latest version of the Designated Marksman Rifle, a popular mid-range UNSC weapon first introduced in Halo: Reach.

All of these new Halo 4 figures will hit stores in October.
Image 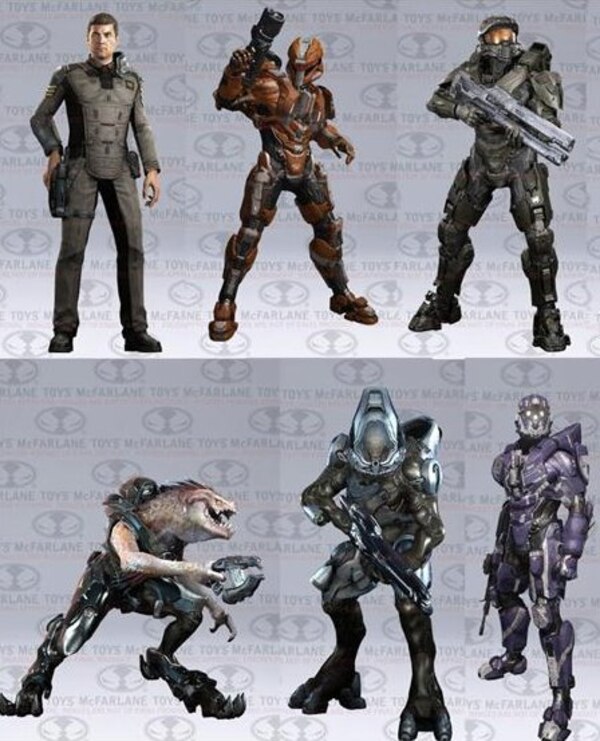