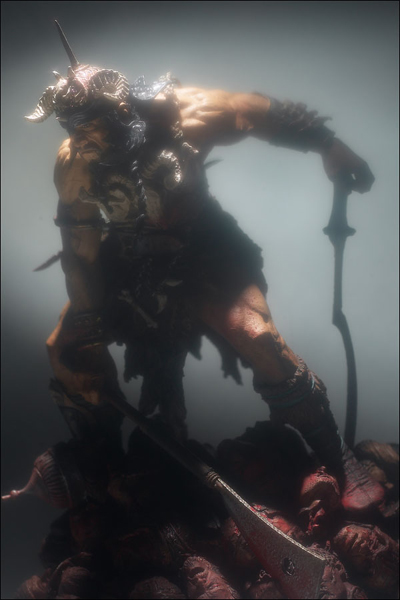 
After much online debate and rumor-mongering, the truth is here: Confirmed details on the upcoming McFarlane's Monsters 3: Six Faces of Madness.

The third series of the McFarlane's Monsters action figure line focuses on the past: A historical look back at some of the human race's most notorious blood-letters and miscreants. Incredibly detailed and fully accessorized, McFarlane Monsters 3 gives new meaning to the term monster.

Jack the Ripper
One of the world's most notorious serial killers, noted more for the mystery surrounding his identity than his body count. Brutally killed and mutilated at least five prostitutes with a straight razor on the dark, foggy, dangerous streets of 1888 London. Although it's the subject of much speculation, to this day, Jack the Ripper's true identity remains unknown.

Vlad the Impaler
The true Prince Dracula, known as Vlad Dracula (translated as Son of the Devil), Vlad Tepes and Vlad the Impaler. An important figure in 15th-century Romanian history, Vlad Dracula is known as a patriot, but he was also bloodthirsty, slaughtering between 40,000 and 100,000 of his subjects -- usually by impalement -- during his reign.

Elizabeth Bathory
The Blood Queen of Hungary, who struck terror throughout that region in the late 1500s and early 1600s, and is said to have killed more than 600 young women. A member of the ruling class, Bathory tortured servants throughout her life. Later, with concern for her fading beauty, she began bathing in the blood of slaughtered young girls as a perverse form of a fountain of youth.

Rasputin
A debauched, illiterate Siberian peasant who turned his sinful life into that of a quasi-religious faith healer and fortune-teller in 19th-century Russia. By "curing" Tsar Nicholas II's son of hemophilia, the "mad monk" became a powerful political and social force in St. Petersburg. This led to an assassination attempt in which Rasputin was poisoned, shot, beaten and eventually drowned.

Billy the Kid
One of the most noted gunfighters of the American Wild West, Billy the Kid is described as both a cold-blooded murdered and a modern-day Robin Hood. Billy was at the epicenter of the New Mexico-based cattle wars and saw a lifetime of violence before his own demise at age 22. He's said to have killed more than 20 men in his short life.

Attila the Hun (Shown Above)
Infamous leader of the bloodthirsty Huns, fifth-century inhabitants in modern-day Hungary, who led devastating plundering raids into western Europe. Known as the Scourge of God, Attila led a vast and merciless mounted army, which left a swath of devastation and death across much of Europe. Attila is said to have died of a nasal hemorrhage on his wedding night.