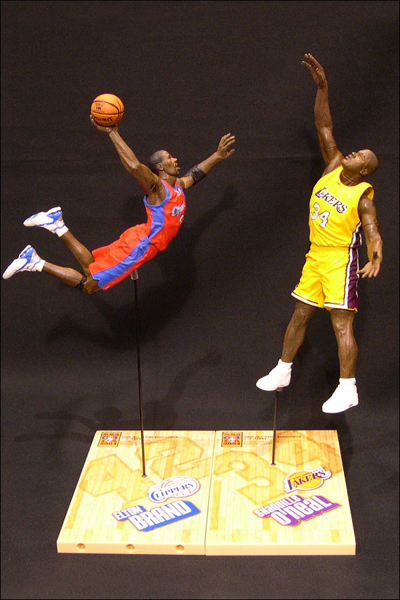 
Tickets are $20 for adults; children ages 3-12, $12; seniors/military $12, (65 and over with valid ID); and children 2 and under are free. Tickets are available at ticketmaster.com and the Staples Center Box Office. For more event info: https://www.nba.com/jamsession/details.html.


McFarlane Toys is producing an exclusive two-pack for the event. Honoring the co-hosts of the event, the exclusive NBA action figure two-pack will celebrate the careers of two local heroes:

The Shaq/Brand two-pack will sell for $20 each; first-day limit for the two-pack is two per person, which may be adjusted as the show progresses. We will also have a very small number of NBA Backboard accessories for sale for $12 each, limit one per person. Cash, Visa, MasterCard and American Express are acceptable methods of payment. The Shaq/Brand two-pack is, of course, a limited-edition exclusive only available at the event. If the exclusives line becomes too long, the staff will create separate cash and credit card lines to speed the process. Also, we will not sell the exclusives to anyone under 3 years of age. Thanks for your attention to this.


Todd McFarlane is tentatively scheduled to make an appearance at the show on Thursday, Feb. 12, possibly in the McFarlane Toys booth that afternoon. We are working out the last-minute details of this signing with the NBA and will update as soon as possible.

Can’t make it to Los Angeles for the event and want a chance to win the exclusive? Spawn.com to the rescue. We’re having a contest to give away two two-packs, one signed by Todd and the other unsigned. Click here to enter:
https://www.spawn.com/info/contests.aspx

You have until noon MST on Feb. 19 to enter. Randomly chosen winners will be announced on spawn.com in the News section on Feb. 20. Good luck.