Will McFarlane Toys Be Showing Their New DC Comics Figures At SDCC???

McFarlane
by Jay Cochran
July 05, 2019
Below is a press release about Todd McFarlane and his company McFarlane Toys plans for this years San Diego Comic Con Convention. While there some cool things listed on there, one of the things you won't see mentioned is DC Comics. It was announced back in February during the New York Toy Fair that starting in 2020 they would be launching a new collector-oriented line of aciton figures based on DC Comics, and many of us including myself had hoped we might get our first look at this new line during what is arguably the biggest comic convention in the world, SDCC.

We double checked with the folks at McFarlane Toys and they confirmed for us that unfortunately the earliest we might get our first look at what they have in store for the DC License is at New York Comic Con which takes place in October 3-6.

So while that is a little disappointing, as I said they still seem to have to pretty cool stuff to reveal later this month at SDCC, so keep reading for the full details.

Tempe, AZ - June 27, 2019 - In the midst of making history with SPAWN 300 and 301, Todd McFarlane has confirmed his appearance as a Special Guest at San Diego Comic-Con. Fans will have the chance to meet the creator of SPAWN from Thursday, July 18th through Sunday, July 21st at Image Comics booth #1915. Todd will be serving on numerous panels, as well as, hosting multiple signing sessions where fans can get their favorite comics and toys signed for FREE! Join the journey on the road to SPAWN 300 and 301, by attending any or all of the following events at San Diego Comic-Con.

Fans not to worry, there are ample opportunities to attend a signing session with Todd McFarlane! Bring your favorite comics and toys to have them signed for FREE. **Limit 2 items per person and each person must be over 13 years of age. No sketches. No CGC, or other witnessing/grading. Autograph session is limited, and wristbands will be issued each day in the Image booth starting at 9:30 AM.

** See above description for further information on signings and limitations.

Todd McFarlane, Image Comics founder, creator of SPAWN, co-creator of VENOM and McFarlane Toys CEO, talks about his 30+ years in the comic and entertainment industry. Todd will be raw and uncensored - talking toys, comics, industry advice and more! He will also be talking about one of the biggest milestones in his career, SPAWN 300 and SPAWN 301, which will set the record for the longest-running creator-owned superhero comic ever!

**Bring your burning questions for Toddfather Q&A. This jam-packed panel is a must for any Todd McFarlane fan!

** See above description for further information on signings and limitations.

Image Comics will be hosting the panel The Road to the Historic SPAWN 300 and 301. Join Todd McFarlane and other surprise special guests from the superstar creative team of SPAWN 300 and 301! This panel will serve as an inside look into the record-breaking moments, as well as, jumpstart the celebration of SPAWN becoming the longest-running creator-owned comic in the world! As an added bonus fans will see new art reveals, experience giveaways, and much more!

McFarlane Toys will also have a display area at the Diamond Comic Distributors booth #2401, where attendees can get “First Looks” into upcoming fan-favorites, including world-renowned brands Harry Potter, My Hero Academia, Fortnite, Season 3 Stranger Things figures and more!

Have the chance to witness history in the making with Special Guest Todd McFarlane at San Diego Comic-Con!
Image 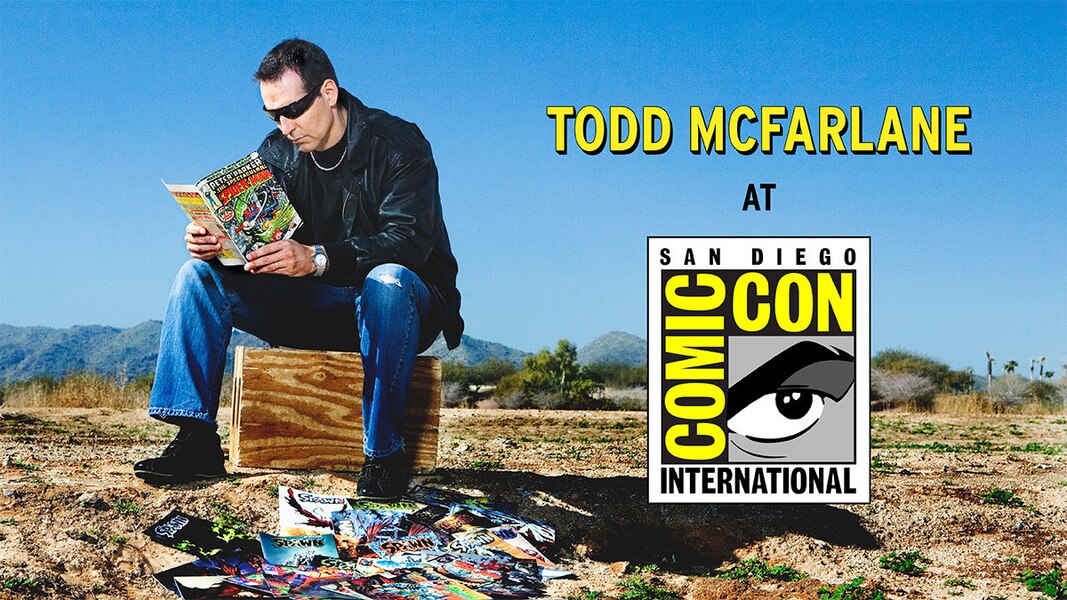 I believe we will find out next month during Toy Fair.

I'm looking forward to getting a few of these figures in hand despite the mixed reviews I've seen on YouTube. I've pre-ordered the Batman Who Laughs, Hellbat, Unchained Armor Superman and the Bat-raptorfrom Amazon and probably will get them over the weekend or next week.

I got comic supes yesterdayand he looks great.The Essentials and NECAwere all 6 3/4, he is a little taller, but not really noticeable. Itsmy favorite Superman head sculpt right now.

Yes, it was announced that there would be a variant whose bat symbol on the chest would be more similar to the classic logo.

I see, that i didn't knew

I'm really disappointed, but my wallet feels fine. I'll wait for the line to get better with time before I buy any figure.

I'm also gonna play the waiting game with this line, I'll wait for them to get a more functional articulation and more classic looks.

My, so far I've only seen the review of btas Batman, the batman who laughs and batgirl figure reviews and so far only 2 of these figures definitely caught my eye, the only one that didn't was the btas Batman since there was something off about this figure and it's not scale (actually i love the 7" scale) but just the proportion of it.

So yes so far I'm more interested on the batman who laughs and Batgirl which i got super excited to know this is a good figure with minor gripes for my point of view, still not intrigued over the Batmobile baf tho, i will wait for a Nightwing figure review to see if I'll also want to get it or not... Oh god I'm just happy right now I do plan to get that Batgirl figure somehow (sorry for my fanboy attitude towards her lol)

According to Mcfarlane's website"Harley Quinnfigureis based on theDC Rebirth Comic".Oof, itsnot even close. So far this line is a pass.