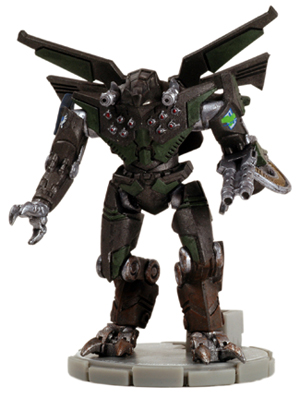 “Falcon’s Prey introduces one of the most-loved factions in the MechWarrior universe, Clan Jade Falcon, to the game,” said Jordan Weisman, WizKids CEO. “The Jade Falcon ‘Mechs, Vehicles, and VTOLs have a highly-specialized look, and bring new faction abilities for any player’s army.”

A Falcon’s Prey Booster Pack contains four randomly selected, prepainted miniature figures, including one ‘Mech, one Vehicle, and two pieces of infantry, and carries a suggested retail price of $9.99. Booster Packs are available at game, hobby, and sports stores everywhere. A MechWarrior: Dark Age Starter Set is required to play. Learn more about MechWarrior online at www.wizkidsgames.com/mechwarrior. The game is fully supported with organized play at conventions and in-store tournaments.

Founded by 20-year game-industry veteran Jordan Weisman, WizKids is a Seattle-based game developer and publisher dedicated to creating tabletop games driven by imagination. Its Mage Knight, MechWarrior, MLB SportsClix, and HeroClix CMGs are among the most successful games on the market today, and the company has sold hundreds of millions of figures worldwide. For additional information, visit wizkidsgames.com.