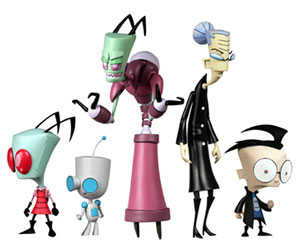 
Invader Zim – Nickelodeon’s irreverent cartoon about the misadventures of an outcast Irken invader, hell-bent on taking over the earth – has gained cult status since new episodes stopped airing a few years back. And yet, for some reason, very little merchandise has ever come out for Invader Zim… Until now.

Palisades Toys is proud to present one of the most sought after action figure lines of the millennium. Prepare yourselves worm-babies, for Invader Zim, Series 1 of DOOM!!!

Due out in the fall of 2004, each of the five figures in Series 1 of DOOM features a detailed display base directly from the show, as well as multiple character appropriate accessories.

Invader Zim
Zim is a short little Irken with a big attitude. In fact, he’s so full of himself that he doesn’t notice that the rest of his society hates him. After foiling the Almighty Tallest’s planned attempt at galactic conquest, Zim was banished to the planet FoodCourtia; however, he ‘quits’ when he learns that the Tallest are launching Operation Impending Doom II. To be rid of Zim, the Tallest send him on a “secret mission”… to take over a little planet known as Earth… Zim’s accessories include a fully customizable Hidden Subterranean Laboratory display base with 5mm connector pipes and four monitors with unique stickers, a Minimoose, a robot bee, Irkin Sandwich and a fully articulated spider pack.

Dib
Dib is the only Skool kid who is able to realize that Zim is an alien, and he becomes obsessed with sharing it with everyone. Fortunately for Zim, Dib is unpopular at Skool, and none of the other kids will even listen to him, let alone believe what he says. Dib quickly becomes Zim’s biggest enemy, and will stop at nothing to deter Zim from conquering the earth. His accessories include a World Invasion Defense Workstation Display Base with a desk, a laptop computer with additional hard drives, a media stack, file folders, a monitor with unique stickers, and headphones.

GIR
Each of the Irken invaders is given a SIR, a robot whose function is to assist in invasions. However, in their efforts to rid themselves of Zim, the Tallest construct a special GIR unit for him, made from spare parts and loose change. GIR, of course, proves to be less than useful to Zim’s “conquest” of earth, where GIR “blends in” with his green, doggy suit. GIR’s accessories include a Saucer Moron Convention display base with an attachable flying pig and banners, a Suckmonkey, a Saucer hat, and a Krazy Taco bag.

The Almighty Tallest Purple
Irken leaders are determined by their height, with the tallest having the most power. Interestingly enough, there are two equally tall Irkens who are the largest on the planet, and together they serve as co-dictators. One of the tallest – the Tallest Purple – appears in Series 1, while the Tallest Red will appear later in the line. His accessories will include a Mobile Command Platform Thingy display base with connector tentacles and 4 monitors with unique stickers, a donut bag with donuts, an Irken soda, a Tallest Red puppet, and an Irken burrito.

Ms. Bitters
Dib and Zim’s teacher at Skool, Miss Bitters embodies all that is inhuman and negative in the world. She slithers like a snake, and takes is upon herself to crush the spirits of all of her students. Miss Bitter’s accessories include a Skoolroom display base with a wall and teacher’s desk, a “worm-infested” apple, ink blot tests, a nameplate, and a hallpass collar.

Each case includes 12 assorted figures. All characters and accessories are subject to change. SRP is $14.99.

Palisades Marketing, LLC (“Palisades Toys”) designs, manufactures, and markets a variety of collectable toy products worldwide through sales to retailers and directly to consumers. Palisades Toys believes its products are among the most highly detailed and collectable action figures, PolyStone statues, PolyStone mini busts in the world. Formed in 1994, Palisades’ products are sold throughout the world at various retail outlets including Toys "R" Us, K•B Toys, Target, Electronics Boutique, Tower Records, Media Play, Sam Goody, Suncoast Video, Amazon.com and a variety of domestic and international comic shops and specialty retailer stores. Palisades Toys’ current product portfolio includes The Muppets, Alien, Predator, Transformers, G.I. Joe, Ren & Stimpy, Army of Darkness, Pink Panther, and others. Further information on this and all other Palisades Toys products is available via our company website at: www.PalisadesToys.com.