When the Scarlet Witch first debuted in Uncanny X-Men #4, she was on the side of the bad guys as a member of Magneto's Brotherhood of Evil Mutants. Later, after a turn to the side of right, Wanda joined the Earth's Mightiest Heroes in in Avengers #16. Now, Diamond Select adds another "Avenger" to their Avengers & Adversaries line of medium statues with the Mutant Mistress of Mysticism, The Scarlet Witch! Sculpted by Sam Greenwell, the Scarlet Witch measures 8" tall (with base) and is captured in a classic "hex-throwing" pose with glow in the dark hex bolts! The Scarlet Witch is designed to stand against soon to be released Quick Silver and comes fully painted and ready to display. Limited to 3,000 pieces worldwide, accompanied by a full-color, hand-numbered Certificate of Authenticity. In Stores August 2003! 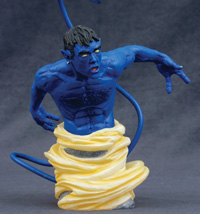 THE ULTIMATE NIGHTCRAWLER bust
We've know the "fuzzy blue elf" for years through his appearances in the pages of Marvel's Uncanny X-Men... but Nightcrawler made his Ultimate Marvel debut in Ultimate X-Men #7, and he's become a fan-favorite member of this series. Diamond Select brings the teleporting mutant home to your Ultimate X-Men bust collection with this all-new 6" tall design by sculptor Jeff Feligno. The base is reproduced semi-clear to replica his teleporting powers. This bust comes painted and ready to display, and is accompanied by a hand-numbered Certificate of Authenticity. Limited to 5,000 pieces worldwide. The Special Edition version is limited to 500 pieces and features a Certificate/print with original art by artist Adam Kubert hand-signed by Kubert & Feligno. In stores in August 2003! 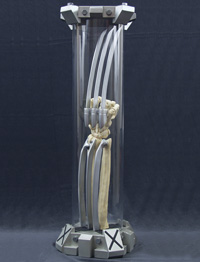 No other X-Man is as popular as the mutant scrapper known as Wolverine! Born with a super-human healing ability, Logan can take a world of punishment and come back for more! It was this amazing ability (which has kept him alive and kicking since before WW2) that drew the attention of a secret government project looking to create the next level of soldier. Lacing his skeleton with nigh-indestructible Adamantium, Logan was transformed from a mere mutant to Weapon X! Now, Diamond Select and Industrial Zoo present this life-sized, 1:1 scale replica of Wolverine's forearm, complete with extended claws and simulated deployment mechanisms! The skeletal arm comes encased in a clear plexi-glass tube, as if it was a relic of some secret government warehouse from the dark future! Measuring over 2-feet in length, this is the ultimate Wolverine collectible! Limited to 2,500 pieces, each comes fully assembled, painted, and ready to display. Full-color, hand-numbered Certificate of Authenticity included. In Stores August 2003!