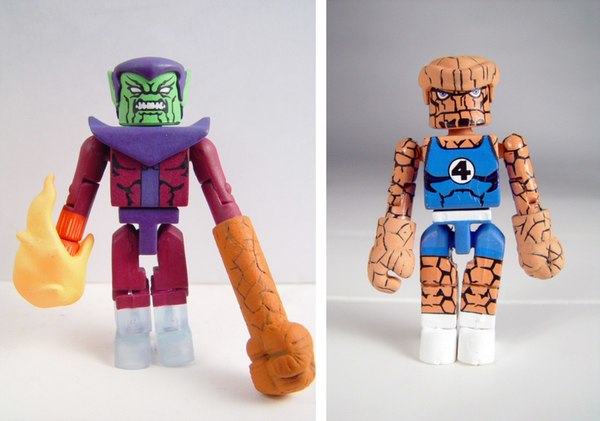 “For more than 40 years, Marvel’s Fantastic Four has attracted the comic book industry’s top talent, who in turn created memorable runs that have entertained generations of readers,” said Diamond Select Toys and Collectibles Marketing and Sales Coordinator Scott Braden. “Of the series’ many high points, though, acclaimed storyteller John Byrne’s legendary run in the 1980s stands out in the hearts of ‘True Believers’ everywhere. It’s for that reason we asked the talented sculptors at Art Asylum to transform two characters who – although never meeting during Byrne’s tenure on the title – are two of the celebrated creator’s favorites, and make them exclusive figures that MiniMates collectors won’t want to pass up!”

“Tower continues to focus on the Mini Block Figures as a major trend in the toy industry,” said Tower Records Special Projects Director Kevin Winnick. “The Marvel MiniMates have simply exploded for Tower. Tower is proud to offer yet another exclusive from this incredible line. We anticipate that this two-pack featuring Super Skrull and Clobberin’ Time Thing will be just as successful – if not more so – than our first single [MiniMate], The Silver Surfer! With the vast array of colorful and iconic characters that the Marvel Universe has, there seems to be no limit to the possibilities of the MiniMates collection!"

Produced by Diamond Select Toys and Collectibles – and available later this summer at all Tower Records locations and via the company’s online shopping destination, TowerRecords.com – the Tower Exclusive Clobberin’ Time Thing and Super Skrull Mini-Mates Two-Pack comes with building-block MiniMate figures based on Byrne’s depiction of these classic characters. Offered in closed box packaging, each of these MiniMates stand approximately 2” tall.

First produced by Art Asylum in 2002, MiniMates were created as a new style of collectible for all ages – with adult consumers and children alike embracing this popular toy. The fan-favorite MiniMates have been based on a wealth of pop culture characters, from the Marvel Super Heroes to Ozzy Osbourne to the lead players from New Line Cinema’s blockbuster The Lord of the Rings film trilogy.

ABOUT DIAMOND SELECT TOYS AND COLLECTIBLES, LLC
DIAMOND SELECT TOYS AND COLLECTIBLES, LLC was founded in 1999 by sister company Diamond Comic Distributors, Inc. Envisioned to create unique and exciting collectibles for children and adults alike, the company has licensed a variety of pop culture properties to be turned into merchandise. With partners such as Marvel Enterprises, Twentieth Century Fox, MTV, Bliss House, and MGM, Diamond Select Toys and Collectibles produces a large range of products based on a wide variety of properties, and is headquartered in Timonium, MD. For more information, visit www.diamondselecttoys.com.

ABOUT MARVEL ENTERPRISES, INC.
With a library of over 4,700 proprietary characters, MARVEL ENTERPRISES, INC. is one of the world's most prominent character-based entertainment companies. Marvel's operations are focused in four areas: entertainment (Marvel Studios), licensing, comic book publishing, and toys (Toy Biz). Marvel facilitates the creation of entertainment projects, including feature films, DVD/home video, video games, and television based on its characters. Marvel also licenses its characters for use in a wide range of consumer products and services, including apparel, collectibles, snack foods, and promotions. Marvel's characters and plot lines are created by its comic book division, which continues to expand its leadership position in the U.S. and worldwide, while also serving as an invaluable source of intellectual property.

ABOUT ART ASYLUM
Brooklyn, NY-based ART ASYLUM was founded by Digger in 1996 as a creative studio providing premier work services to the toy industry. This state-of-the-art studio and office complex with a staff of 20 joined forces with Jay Foreman and Adam Unger in 2000, and transformed itself into a fully functioning new force in the action figure business. The company’s current roster includes such lines as Star Trek, Tony Hawk, Crouching Tiger, Hidden Dragon, Eminem, Bruce Lee, Dark Angel, and their own new brands of toys: N' The Box, Asylum Ultimate, and MiniMates. www.artasylum.com

Except for any historical information that they contain, the statements in this news release regarding Marvel’s plans are forward-looking statements that are subject to certain risks and uncertainties, including a decrease in the level of media exposure or popularity of Marvel’s characters, financial difficulties of Marvel’s major licensees, delays and cancellations of movies and television productions based on Marvel characters, poor performance of major movies based on Marvel characters, toy-production delays or shortfalls, and continued concentration of toy retailers. These and other risks and uncertainties are described in Marvel’s filings with the Securities and Exchange Commission, including Marvel’s Annual Reports on Form 10-K, Quarterly Reports on Form 10-Q, and Current Reports on Form 8-K. Marvel assumes no obligation to publicly update or revise any forward-looking statements.