Toy Fair
by Jay Cochran
February 21, 2011
Well, another Toy Fair has come and gone. Although I went in this year thinking that it was going to be a somewhat depressing outlook for new products for action figure collectors, I actually was pleasantly surprised with the amount of cool things coming in 2011 for us.

As something new, I thought I would wrap up this year’s coverage of the event with just a few thoughts on what I liked and maybe even some on what I didn’t, topping off with a pick of the five coolest things I thought were revealed this year.

Let’s start off with some thoughts on the BIG 2, Hasbro and Mattel. They had by far the most new products on hand for collectors, and both had quite a few nice surprises.

With Hasbro, I was most surprised and very happy to see is what they are doing with G.I.Joe this year – sticking with its roots by focusing on characters based on A Real American Hero and continuing the trend started last year in the “Pursuit of Cobra” line by including tons of cool accessories with each figure and giving them lots of detail. A modern update on such classic figures as Sci-Fi was a welcome surprise, and seeing a new updated Skystriker vehicle was all very cool. I also like Hasbro’s move to start the Renegades line of figures based on the new cartoon series that airs on the Hub network by integrating them into the regular line instead of replacing the existing line with a Renegades-only theme. I also like that they are giving the Renegades figures a less animated feel so they will fit in with existing collections. I feel the new G.I.Joe cartoon is very good, but I understand some people’s unhappiness with the overall look of the series. It’s not something that bothers me personally but I know that is not the case with a lot of fans, so I hope these new figures will help bring more people into the “Renegades” fold.

Other good news for Joe fans the return of Hasbro’s Derryl DePriest to the G.I. Joe and Star Wars brands. DePriest played a huge role in the success of the Star Wars brand. For those not familiar with DePriest, he was the head of the G.I.Joe brand when I first started covering Toy Fair almost 10 years ago, and his passion for the products was truly inspiring. Just talking to him about the new stuff, I could tell how he was truly excited about what he was working on and that passion clearly carried over to what ended up on shelves. When he moved over to Star Wars, it was certainly a great day for Star Wars fans as DePriest brought that same passion he had for Joe to Star Wars. I don’t think it was explicitly said but if I had to guess, DePriest probably played a large role in getting the new Skystriker to shelves this year.

Another Hasbro brand that shined at this year’s Toy Fair was Marvel. Hasbro continues to put out a lot of cool stuff for collectors like the new 3.75” Doctor Strange, Darkhawk and Commander Rogers figures in the Marvel Universe line and the long-awaited USAgent in the Captain America line. Although 6” collectors didn’t see a lot on hand at Toy Fair, the press was treated to some nice shots of upcoming Marvel Legends figures like the new Modern Thor figure and 6” movie versions of Captain America and Thor. The big year of the 6” return, 2012, is still distant, , but Hasbro has some nice stuff to tide us over. And let’s not forget this year’s Masterworks Sentinel figure, which looks like it might be even cooler than last year’s Galactus.

For me, probably the coolest thing that debuted from Mattel this year was the new Masters of the Universe Classics Man-E-Faces figure. I was always a big fan of this guy from the original series and even loved the 200x version, so I am happy to see he will be getting the Classics treatment this year.

One of my concerns this year, and a frequent occurrence when a big new movie is released, is the potential overstock of Green Lantern items on shelves crowding out shelf space for anything else Mattel might offer for DC. Hasbro experienced this problem last year with the Iron Man 2 products. I suppose the same could also be said for Captain America and Thor movie products as well. We will have to see if stores and these companies are able to work out some kind of adequate balance so that consumers can find ALL the stuff they want and retailers aren’t left with a bunch of unsold merchandise that will inevitably have to be out on clearance.

Two smaller companies with a number of products that I have very high hopes about this year were NECA and Jazwares Inc.

Jazwares has a new line of 3.75” Mortal Kombat and Street Fighter figures this year. Although Jazwares has had some figures that weren’t too popular with collectors, I think these new lines have real potential. We got to see some prototype sculpts which unfortunately we aren’t able to show you, but the detail looked very nice. We are told that steps will be taken to incorporate a good amount of articulation. I also like some of the ideas they are currently exploring like figures with transparent parts to show innards for those graphic fatality moves we all love to do in the games.

NECA certainly has become well-known for really nice, detailed figures for many different video game and movie properties. This year, they continue that trend 10-fold with new Predator figures that look incredible and with a very cool Duke Nukem figure. However, the line I was most impressed with this year was their Gremlins stuff, and I’m not even a huge Gremlins fan. I think the fact that they were able to take somewhat mundane characters from the movie and give them such awesome details was what made this line stand out so much to me, especially the very cool Mohawk Spider Grimlin they had on display. That detail on that figure was awesome and creepy all at the same time. This figure not only will be great for Grimlin’s fans but will make a great monster for your other 3.75” figure lines to fight.

I’ve saved the best for last. The brand I was most impressed with this year was Bandai’s new line of Thundercats toys. I think Bandai has done a fantastic job of combining playability with detail to give you nice products that both kids and adult collectors will enjoy, and I am not just talking about the very cool 7” Classic collector figures showing the characters as they appeared in the 80’s television series. I also think the new stuff is very cool and that Bandai and Warner Bros. have done a good job modernizing the brand for a new Generation. I have seen a lot of collectors bash the new stuff, but I think people should give it a chance before deciding they don’t like it, simply because it’s new and different.

To me, Thundercats always seemed to take a back seat to other 80’s brands like Transformers, G.I. Joe, He-Man and so-forth, but I honestly think Thundercats might be set to have the biggest comeback of them all…but only time will tell.

So that’s it’s for my thoughts on this year’s Toy Fair, and now here is my top 5 picks of the coolest toys shown there. 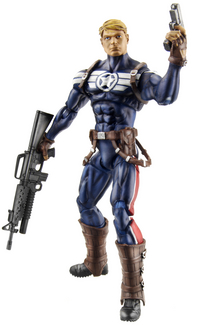 5. Marvel Universe 3.75” Figures (Hasbro) – Lots of cool characters on tap for fans from both the comic and movie universes. As a huge Captain America fan, I was very happy to see USAgent and the new Commander Rogers figures coming this year.

4. 3.75” Mortal Kombat figures (Jazwares Inc.) – Though these are still in the early stages of development, I have high hopes that these figures will deliver on articulation and detail and that we will finally have some very cool Mortal Kombat figures done in the 3.75” scale to go up against G.I.Joe and Marvel guys. 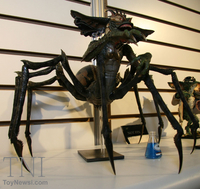 3. Mohawk Spider Grimlin (NECA) – This figure was a complete surprise to me, and the detail on this bad boy was incredible. Grimlin fans will love it, and I think this will make a great addition to other 3.75” lines like Star Wars and so-forth. 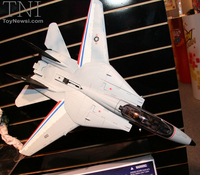 2. G.I.Joe Skystriker (Hasbro) – This one is all about the nostalgia factor for me. The Skystriker was one of my favorite vehicles as a kid, and I love to see it coming back. If the thing still had the parachute feature, then I probably would have made this #1. 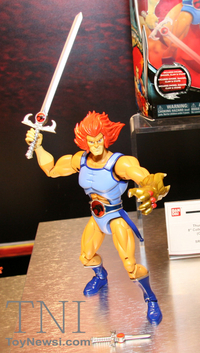 1. ThunderCats (Bandai) – I loved the new Classics collector line and thought the Lion-O figure was virtually perfect from what I saw. I rate the entire line as #1 and think it will offer a lot of cool stuff for adult collectors and kids alike. Bandai isn’t traditionally known for its collector stuff, but I think the company has taken great strides to change that line of thinking with these toys and I have high hopes they will be very successful with these.

Well, there you have it – my thoughts and top 5 picks from this year’s Toy Fair. Let us know what you think and what your favorites in our comments section below.
Image 1 of 5 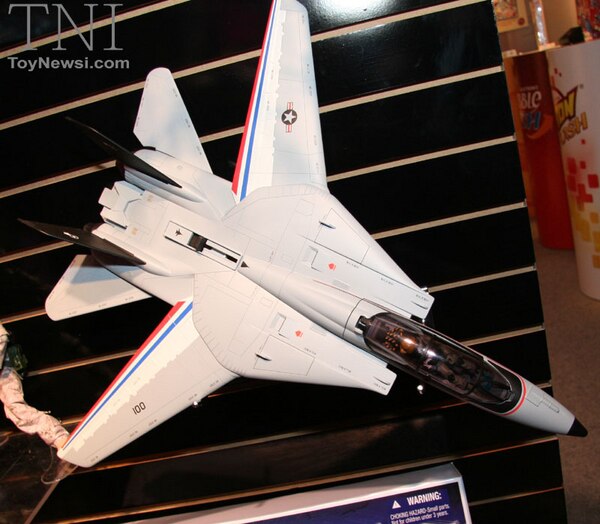 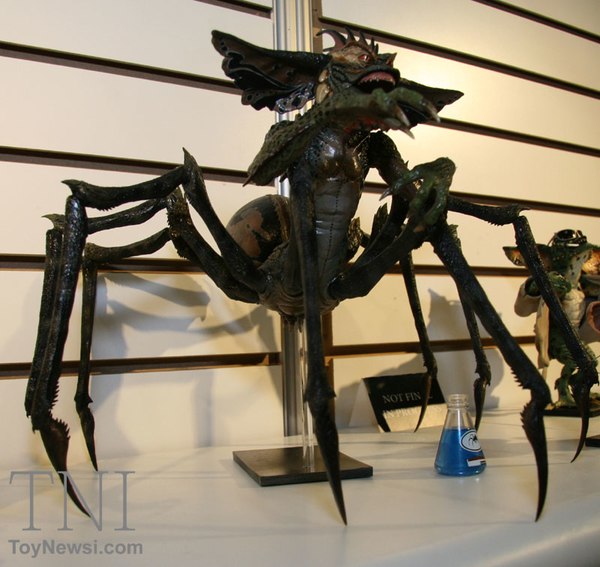 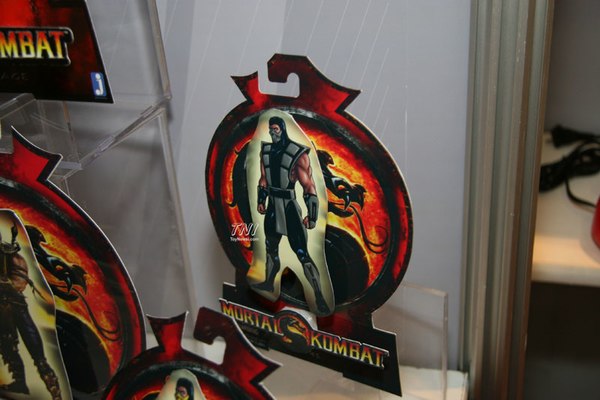 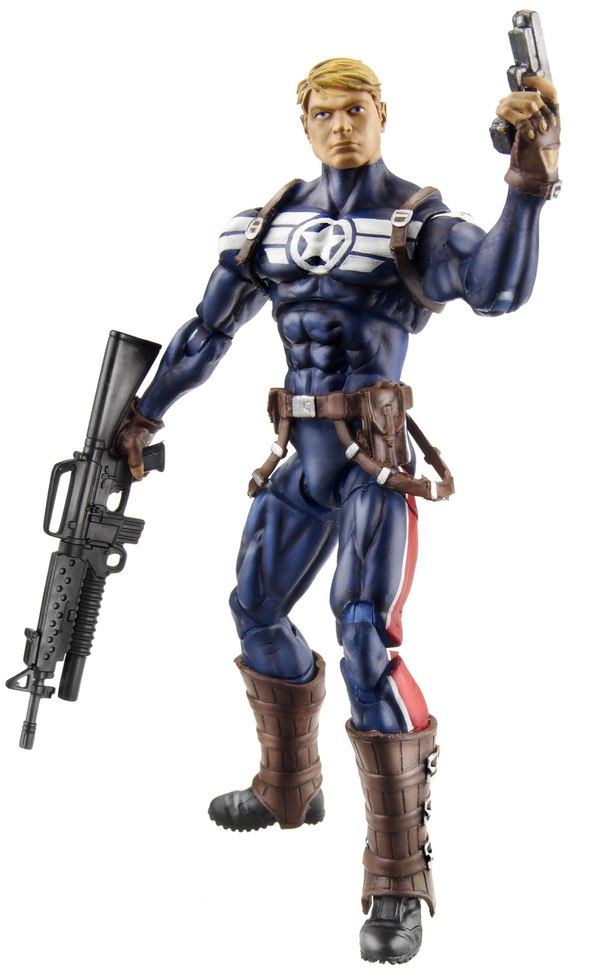