UPDATE 4: The Marvel Sentinel and Ultimate Transformers Prime have now SOLD OUT!

UPDATE 3: The Star Wars & G.I.Joe exclusives are now SOLD OUT!

UPDATE 2: All exclusives are online now.

UPDATE: The exclusives are available online now at HasbroToyShop.com. However at this time they only have listed the Star Wars set, The GIJoe/Tramsformers Skystriker, The Transformers Nerf Blaster and the Ultimate Optimus Prime. Hopefully the others will be added soon thought right now the site is loading very slow due to the high traffic volume.


We have confirmation from Hasbro their 2011 San Diego Comic Con exclusives will be going for sale online at their website HasbroToyShop.com tomorrow morning (7/26). They unfortunately didn't have an exact time in which they will go up for sale so you will probably just want to start checking when you wake up and then keep checking periodically as the day goes on. If we get any kind of confirmed details on the times we will be sure to update you here and when we see them go on sale we will also post here for you.

Entering the code COMIC2011 should also get you 10% off your order.

Just to recap, the exclusives this year include the following:

G.I. JOE SKY STRIKER VEHICLE WITH STARSCREAM DECO AND 3.75" COBRA COMMANDER SPECIAL EDITION FIGURE
(Ages: 4 & up; Approximate Retail Price: $49.99 each)
The worlds of G.I. JOE and TRANSFORMERS collide in toy form. The new G,I, JOE: SKY STRIKER jet receives a custom make-over to become the vehicle form of legendary DECEPTICON STARSCREAM. The COBRA COMMANDER figure, which can fit in the cockpit of the jet, features the classic character in a flight suit and comes with a custom Walther P38 pistol - well known to TRANSFORMERS fans as the alt-mode of DECEPTICON leader MEGATRON!

MARVEL UNIVERSE 16” SPECIAL EDITION SENTINEL FIGURE
(Ages 4 and up; Approximate Retail Price $59.99)
The bane of mutantkind is now a red-hot Comic-Con special edition figure! Hot on the heels of 2010’s wildly popular MARVEL UNIVERSE 19” GALACTUS FIGURE, fans at Comic-Con will be the first to be able to purchase this MARVEL UNIVERSE 17” SENTINEL FIGURE, featuring a variety of lights and sounds and packaged on a giant blister card! Both the blister card and its special edition outer box are adorned with one-of-a-kind artwork by Joe Quesada, Marvel Comics’ chief creative officer.

MARVEL MIGHTY MUGGS SPIDER-MAN SPECIAL EDITION FIGURE
(Ages: 6 & up; Approximate Retail Price: $15.99 each)
Your friendly neighborhood SPIDER-MAN is back, as a cool and collectible MIGHTY MUGGS figure! This special edition figure features a removable soft goods mask with a Peter Parker paint deco underneath, and is highlighted in premium commemorative foil packaging.

MARVEL LEGENDS THOR SPECIAL EDITION FIGURE
(Ages: 4 & up; Approximate Retail Price: $24.99 each)
Celebrate the return of the fan-favorite MARVEL LEGENDS toy line in 2012 with this limited-edition preview figure. THOR, the mighty AVENGER is featured in his latest comics-accurate costume in the classic 6-inch MARVEL LEGENDS scale, and in a premium package shaped like his hammer, MJOLNIR.

MY LITTLE PONY 2011 Special Edition Pony
(Ages 3 and up; Approximate Retail Price $14.99)
The popular special edition MY LITTLE PONY figure, available each year at San Diego Comic-Con, will be showing fans a more mysterious side of the MY LITTLE PONY brand in 2011. This special edition, translucent pony figure is decorated with playful gothic details and a few ghoulish graphics, featuring beautifully rooted hair in shades of fuchsia and magenta. Look closely – can you spot a hidden “M” “L” and “P” in the details? The pony is housed in a vibrant package with two clear “peek-a-boo” MY LITTLE PONY silhouettes on either side of the box, showing off every goth detail of the black and purple figure. Fans can get a first look at this HasbroToyShop.com exclusive when it launches at San Diego Comic-Con 2011!

STAR WARS VINTAGE REVENGE OF THE JEDI SPECIAL EDITION DEATH STAR COLLECTOR’S PACK
(Ages 4 & up; Approximate Retail Price: $129.99)
Revenge is finally served in this incredible package of 12 figures and two exclusive mini-figures, all on highly collectible Revenge of the Jedi packaging! This Comic-Con special edition figure is the only place to get all 12 short-packed STAR WARS VINTAGE figures in one place, all individually carded with packaging that pays tribute to Kenner’s classic “lost” Revenge of the Jedi backing cards, which bore the original name of Episode VI. In addition, this special DEATH STAR collector’s pack will be the only place to get SALACIOUS CRUMB and the MOUSE DROID on Vintage Revenge of the Jedi mini-backing cards. The other figures included are LUKE SKYWALKER, HAN SOLO, R2-D2, DARTH VADER, B-WING PILOT, ADMIRAL ACKBAR, BOBA FETT, ENDOR REBEL TROOPER, STORMTROOPER, WICKET THE EWOK, PRINCESS LEIA and TIE-FIGHTER PILOT.

TRANSFORMERS PRIME OPTIMUS PRIME FIRST EDITION FIGURE
(Ages: 5 & up; Approximate Retail Price: $19.99)
With the mainline series not available until later in 2011, be among the first to get an action figure based on the style of The Hub's hit animated series, TRANSFORMERS PRIME with this special edition figure. This deluxe class OPTIMUS PRIME figure converts from robot to truck mode and features a premium deco only available in this special edition Comic-Con figure. And, in true TRANSFORMERS fashion, the “Matrix of Leadership” packaging in which the figure is housed ‘converts’ into a wearable piece!
Image 1 of 13 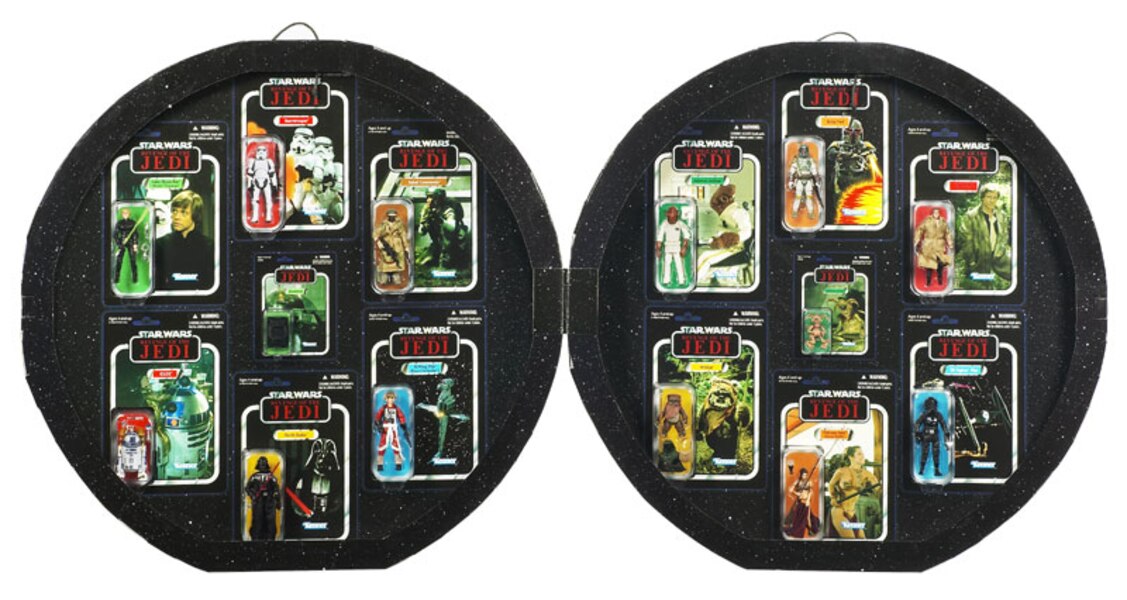 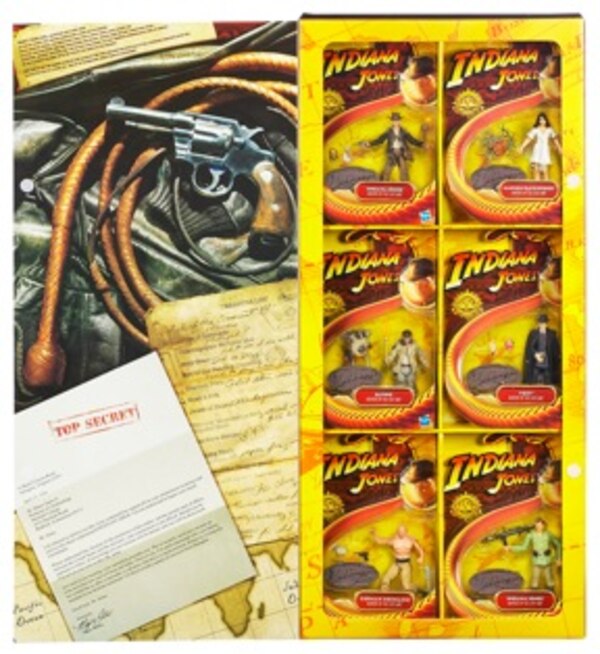 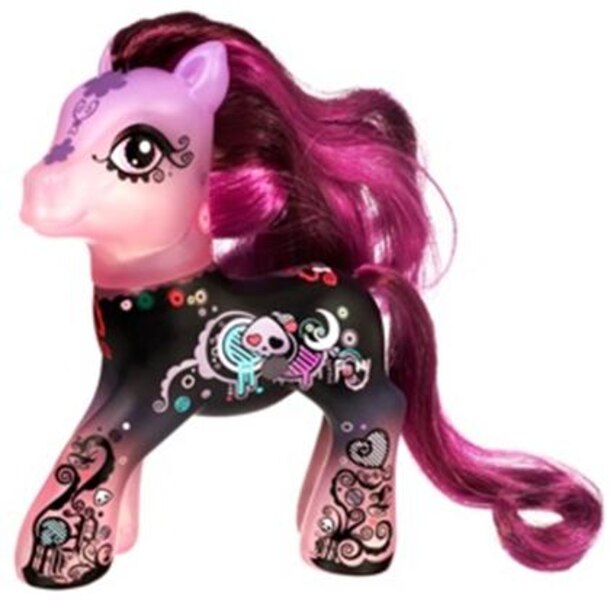 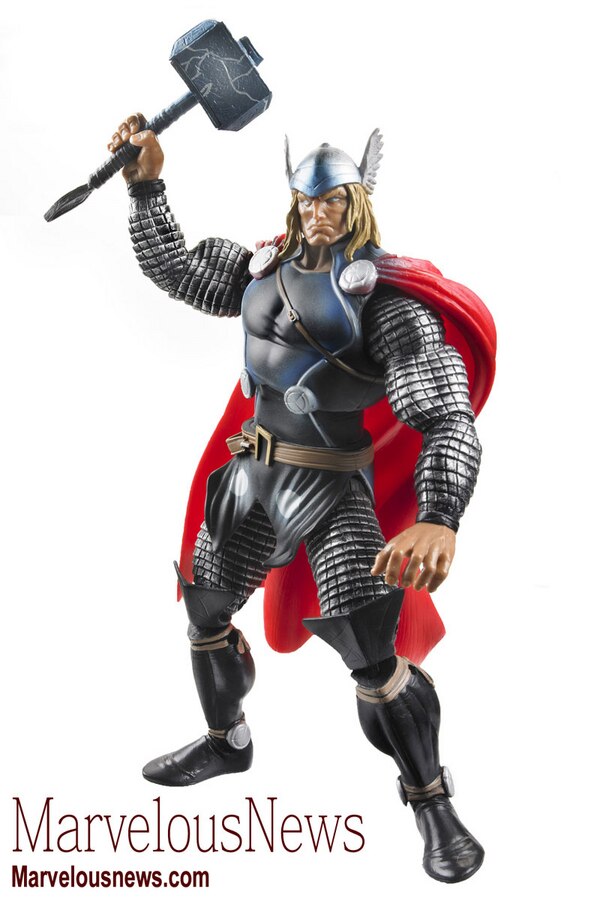 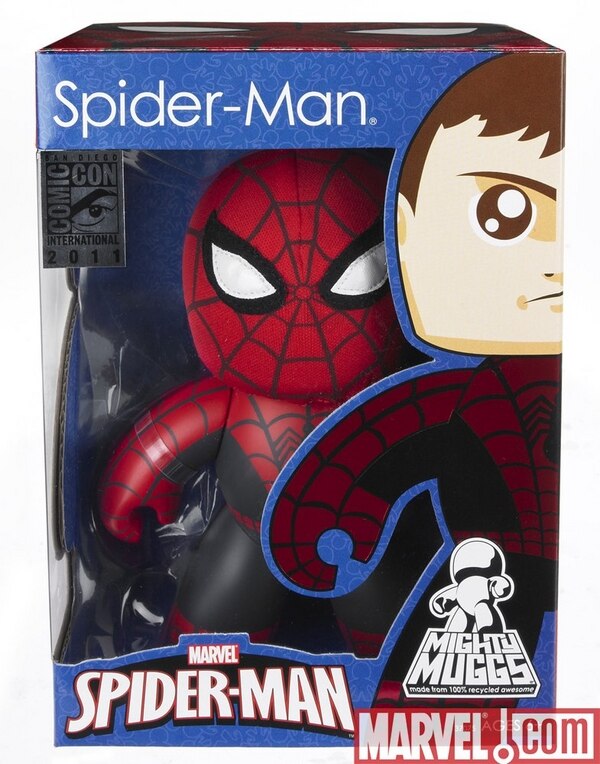 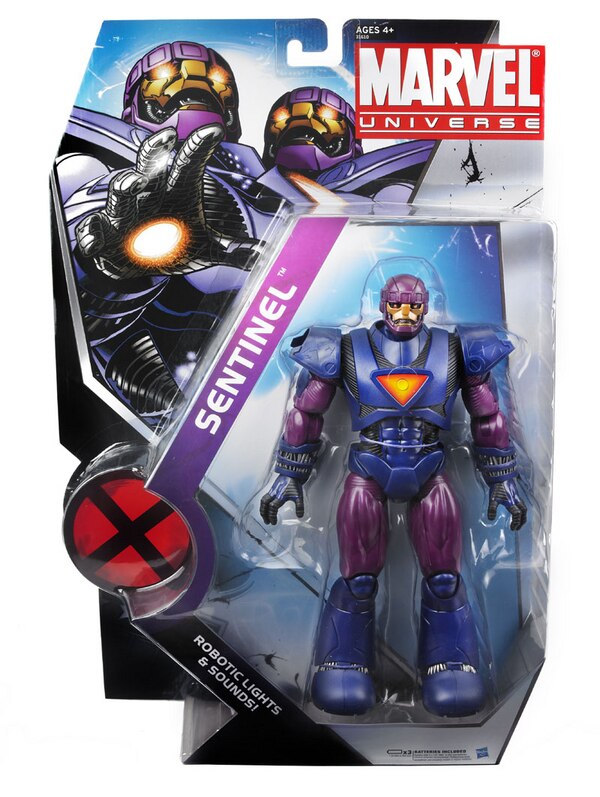 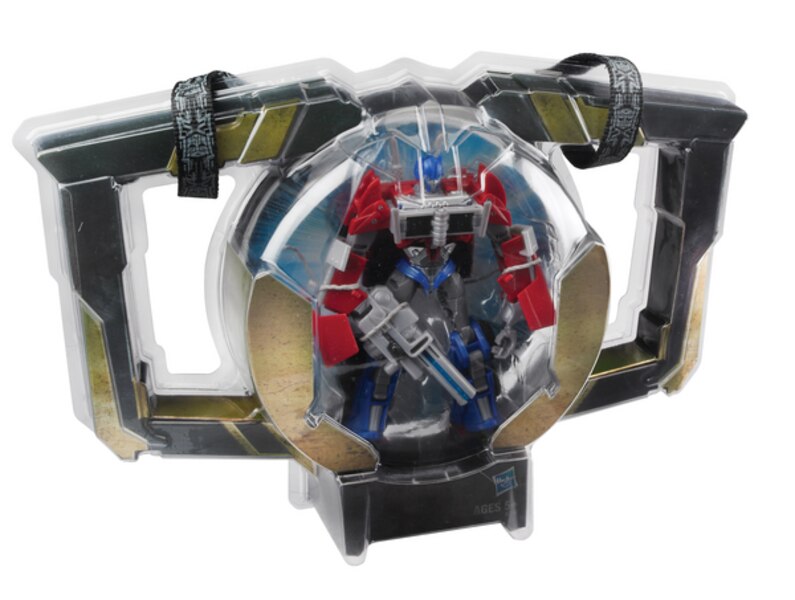 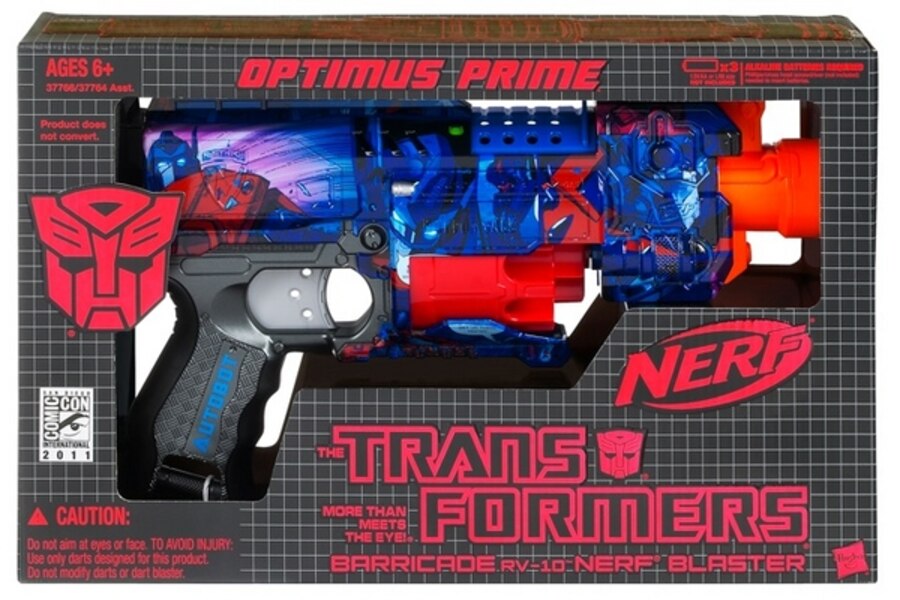 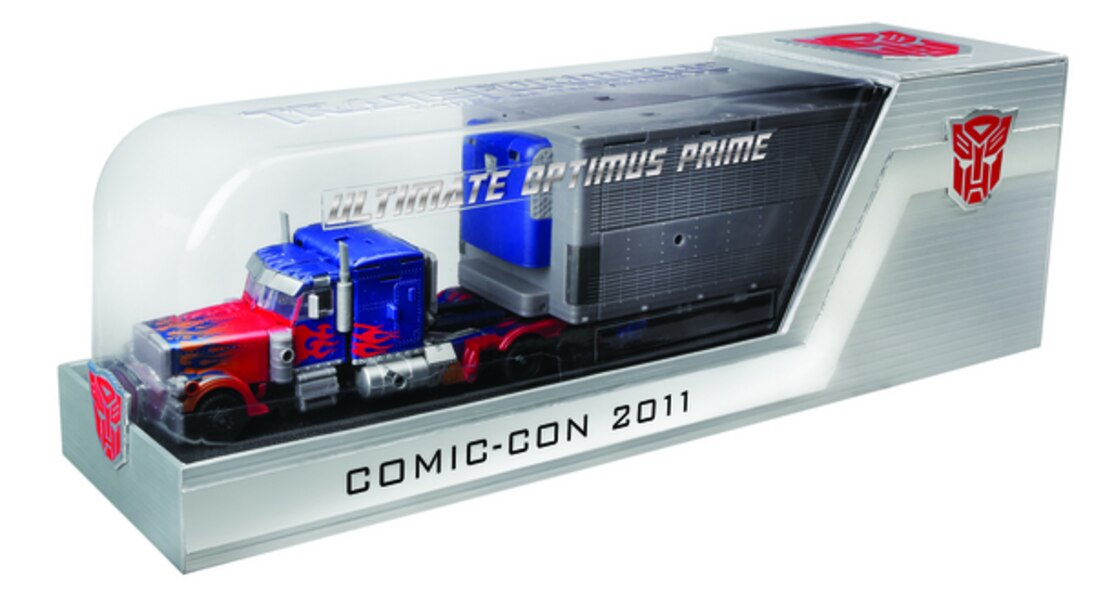 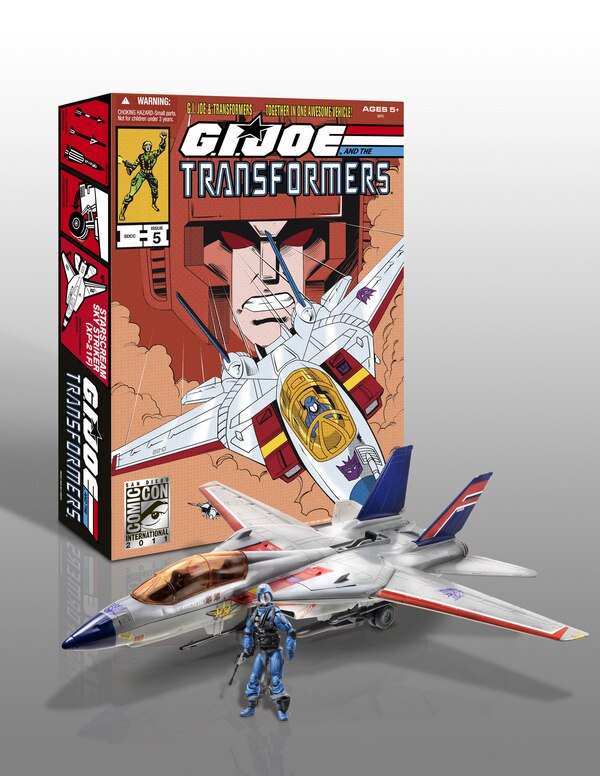 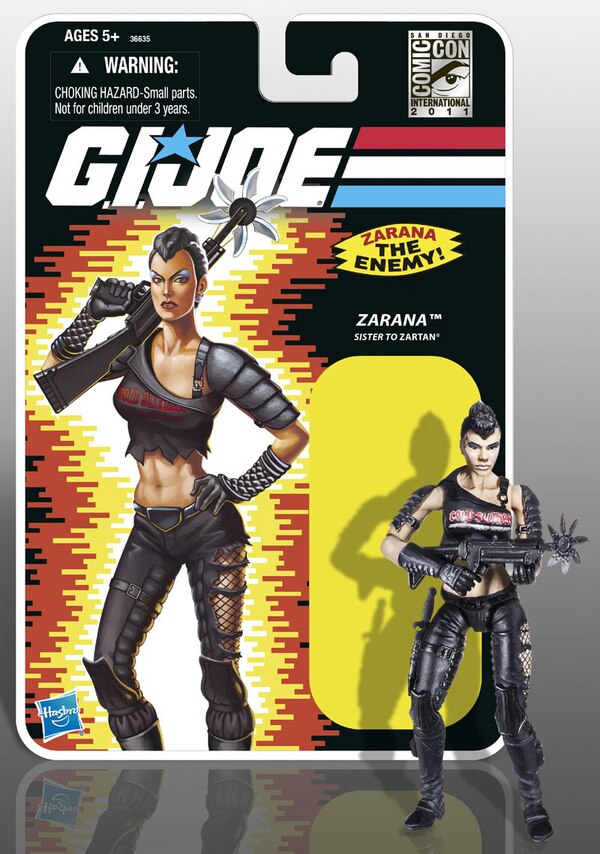 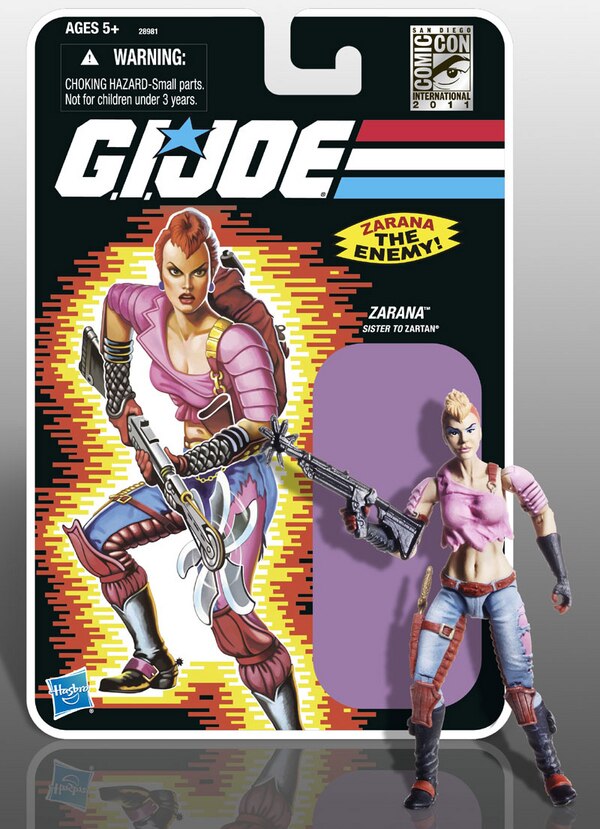 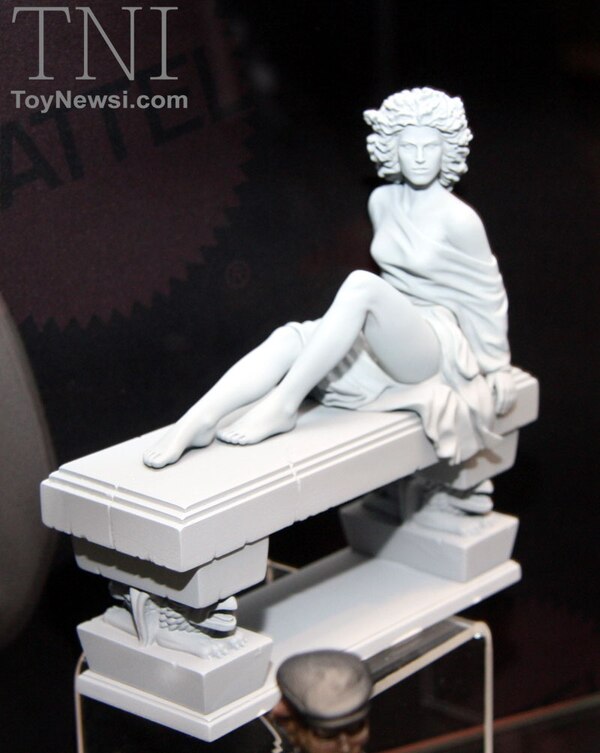 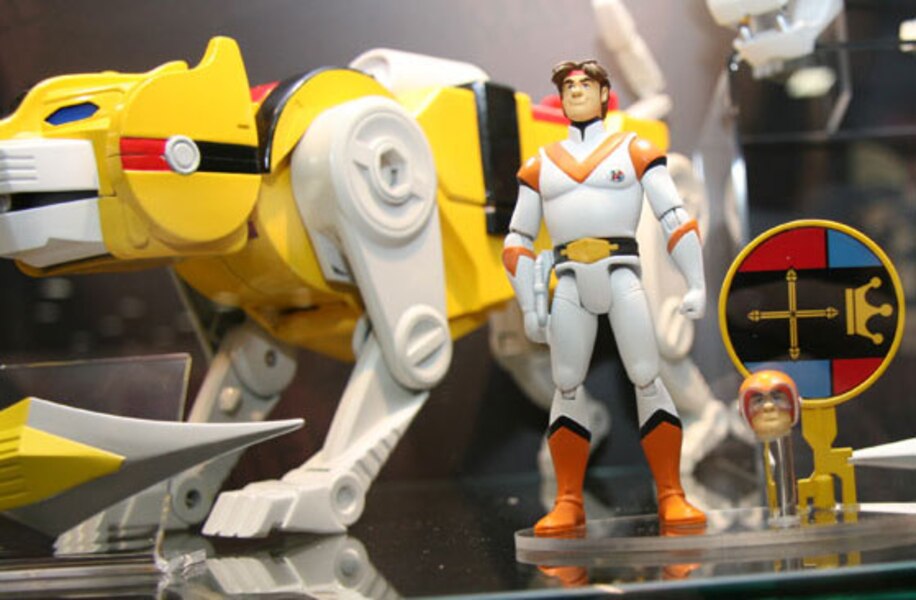 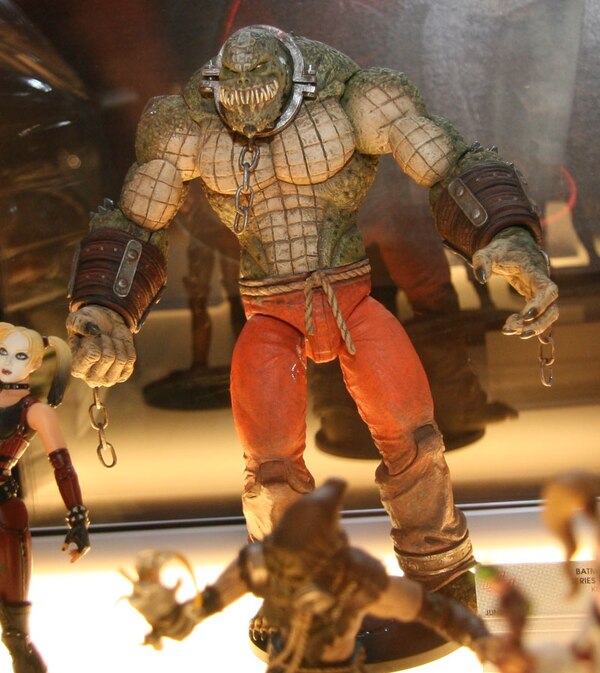