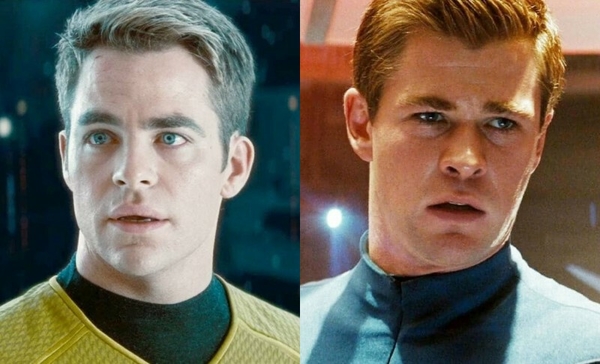 Chris Pine and Chris Hemsworth were in negotiations to star in Star Trek 4 but sources say that talks between the two actors and the companies, Paramount Pictures and Skydance Media, couldn't come to an money agreement deal.

Pine was due to reprise his role as iconic sci-fi hero Captain Kirk, which he has inhabited for three movies, while Hemsworth was to have played his father in a time-traveling adventure.

Pine and Hemsworth want the studios to stick to existing deals as they insist they have deals in place and that the studios are reneging on them, forcing them to take pay cuts as they try to budget a movie that is following a mediocre performer. Paramount, according to insiders, contends that Trek is not like a Marvel or Star Wars movie and is trying to hold the line on a budget. The last movie, Star Trek Beyond, grossed only $343 million worldwide on a budget of $190 million.

The project could recast Kirk and his father if both sides don't come to some sort of an agreement. Either way, the movie remains a priority development and is not being put on hold and for the first time in the franchise history, a female director, S. J. Clarkson is sitting in the captain’s chair.

Really unhappy about this... But, if thats the way it is, I say just leave it where it landed, and if you must, start fresh. Take Trek in a new direction. And, not so much of the Tarantino variety.

If you ask me, just rewrite it and write out the Hemsworth parts, Kirk is a tad more important than his Dad we really don't need anymore about him, lol. Still hope it gets made as I enjoy the new movies.

This pisses me off. Now everything has to be like Marvel for these studios to put things on track? One other thing, back then Hemsworth was not such a famous actor as he is today, Pine had a longer career back then and still now is a well payed actor.So obviously they will not take low pay today.

They should be worried about make a better movie so the box office is bigger.

Dang, this next one is using a Tarantino script, right? I usually don't side with studios but Beyond was a good movie that did poorly, maybe the actors should agree to a one-time pay cut to keep the series alive.

No slight against Tarantino, but Star Trek just doesn't fit in his niche and vice-versa. The writings on the wall. Paramount has lost their way where Star Trek is concerned. All hands abandon ship, she's going down.

As for Pine and Hemsworth? Pine is really coming into his own. He's not that "promising young talent" anymore. He's on his way to being a "bankable star." Taking a pay-cut to stay with Trek would be a sucker move financially, and could really hurt his career if the next one tanks like the last one.

Hemsworth has put in the hours and more than paid his dues. He doesn't have to take a project he doesn't believe in, and I think Ghostbusters taught him a hard lesson about signing up with a shaky project with nothing but name recognition going for it.

Lets be honest, Star Trek has a stink about it nowadays, and I say that as a fan going all the way back to my preschool days. When Paramount figures out what they've lost, they'll have A-listers beating down their doors to get a piece. Until then, make like Elsa and let it go.

Dang, this next one is using a Tarantino script, right? I usually don't side with studios but Beyond was a good movie that did poorly, maybe the actors should agree to a one-time pay cut to keep the series alive.