"Our fans love the platform's robust library of comic books and, with the transformation, we will not disappoint," said DC Publisher and Chief Creative Officer Jim Lee. "I'm excited to share that not only will DC UNIVERSE INFINITE members still be able to read all of the great comics that they've enjoyed but new issues are debuting on the platform quicker than before, digital first exclusives are being created, and the members-only events will begin as soon as possible. There has never been a better time to be a DC fan!"

DC's premium digital comic book platform provides members with an expanded collection of comics and Original Graphic Novels, spanning over 80 years of the DC Multiverse. Fans can also download comics, graphic novels and originals for unlimited offline reading on their favorite devices from a smartphone or tablet.

The fan-favorite community area will be free to all registered and premium subscribers with a full calendar of events planned for 2021. Current DC UNIVERSE subscribers will not need to create a new account as their DC UNIVERSE login will transfer to DC UNIVERSE INFINITE.

For DC UNIVERSE subscribers who want ongoing access to premium DC originals, the special DC UNIVERSE monthly member offer to HBO MAX has been extended. In celebration of Batman Day and the announcement of DC UNIVERSE INFINITE, the special offer for eligible monthly subscribers to upgrade their service to include HBO Max for an additional $4.99 per month for a limited time is now available through October 30, 2020.

What Is DC UNIVERSE INFINITE?

What content will be available on DC UNIVERSE INFINITE?

DC Universe Infinite Originals: First-access to a collection of titles before they're available anywhere else!

In addition, DC UNIVERSE INFINITE will feature news and behind-the-scenes looks at DC Comics as well as full access to the DC character encyclopedia.

On what platforms will DC UNIVERSE INFINITE be available?

DC UNIVERSE INFINITE will be available for iPhone, iPad, Android Phone and Tablets and online for web and mobile web at dcuniverseinfinite.com.

Will I have access to DC UNIVERSE INFINITE on my TV or Amazon tablet?

In December of 2020 DC UNIVERSE will no longer be available on Roku, Apple TV, Android TV, Amazon TV and tablet, and Xbox apps.

When will DC UNIVERSE INFINITE be available?

How much will DC UNIVERSE INFINITE cost?

DC UNIVERSE INFINITE will add a larger and more recent set of titles to its existing comics library at the same low price of $74.99/year and $7.99/month.

Will DC UNIVERSE INFINITE be available outside of the United States?

As a thank you, any subscriber who confirms and maintains their account through the launch of DC UNIVERSE INFINITE will also be eligible to receive a "thank you" DC Shop voucher of $25 for annual subscribers and $10 for monthly subscribers, subject to terms and conditions.

Yes -- starting in October users will be able to sign-up for DC UNIVERSE INFINITE.

How can I continue to access the DC UNIVERSE community?

Access to community will remain unchanged for all DC UNIVERSE members - whether premium or registered via the web through our evolution. We have exciting things in store in the year ahead - stay tuned for more details!
Image 1 of 2 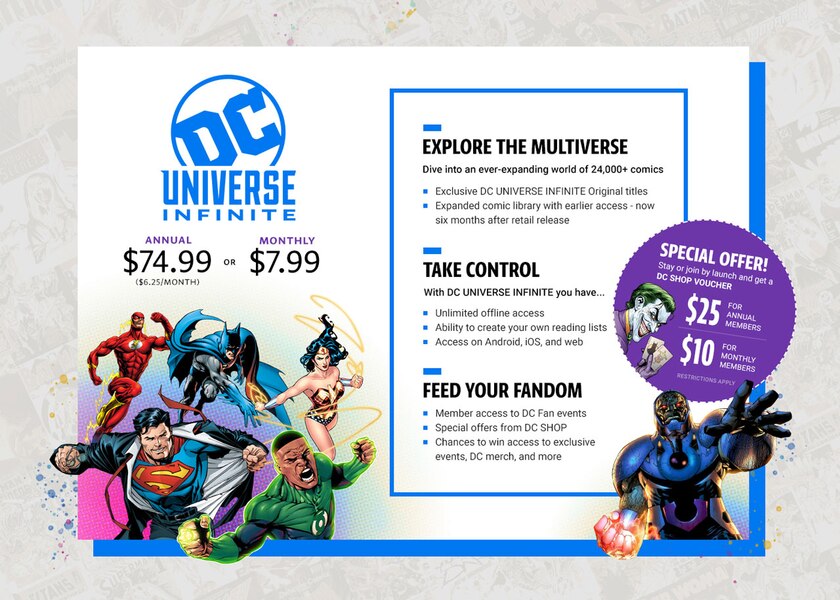 At least they did something smart, that streaming service was going nowhere. Looks like the restructuring of DC is still going on and I don't think we have seen the last of it.

It was predictable, though with all the bloodbath at DC i wouldn't be surprised if they took down even that service, I'm glad they are going globally as well.

So I have to cancel everything and subscribe again?

What about the people that already have HBO Max?

Called it.Best news in that press release is the renewal of Harley Quinn. That cartoon is great.