GI Joe
by Jay Cochran
August 24, 2007
Here is a look at Hasbro upcoming second series of 3 3/4" GIJoe figures for their 25th Anniversary line. Shown are Beach Head, Serpentor, Buzzer, Lady Jaye, and a Cobra Trooper. Look for these to hit shelves in September 2007.
Image 1 of 15 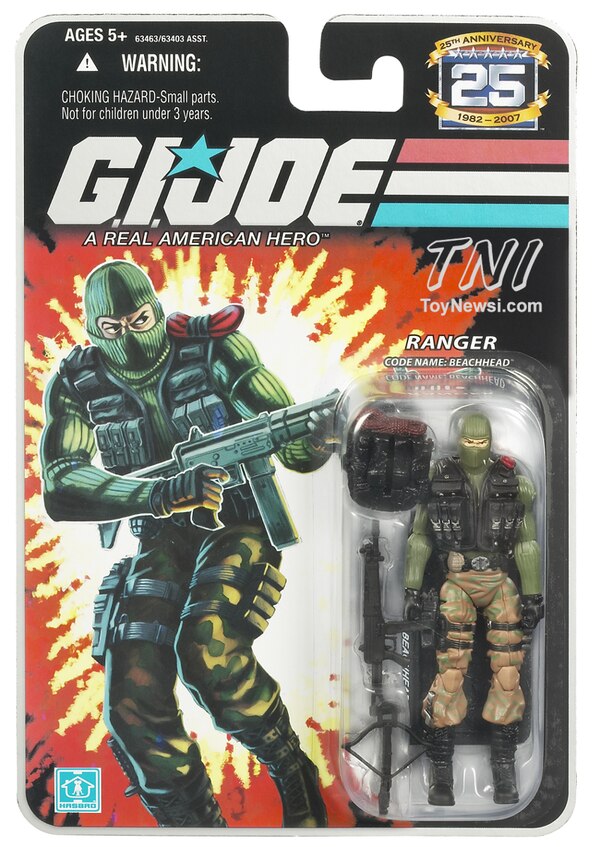 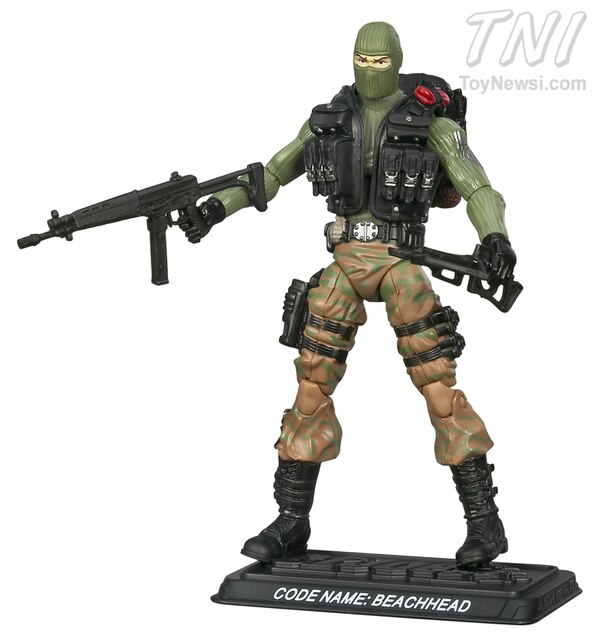 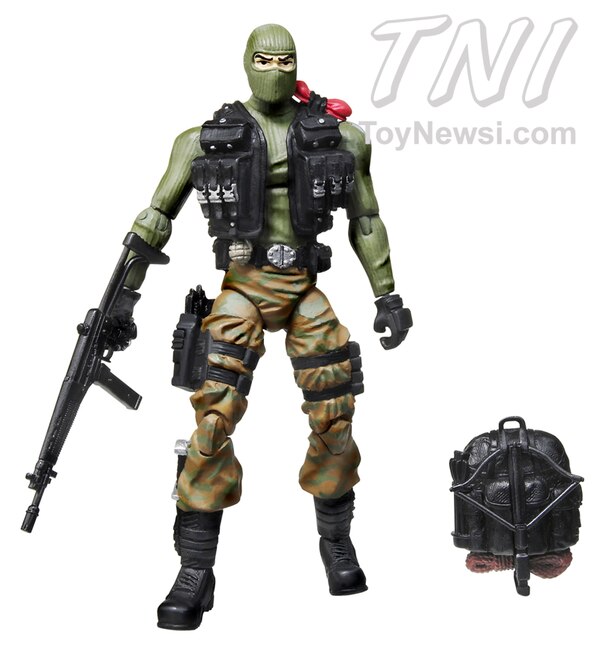 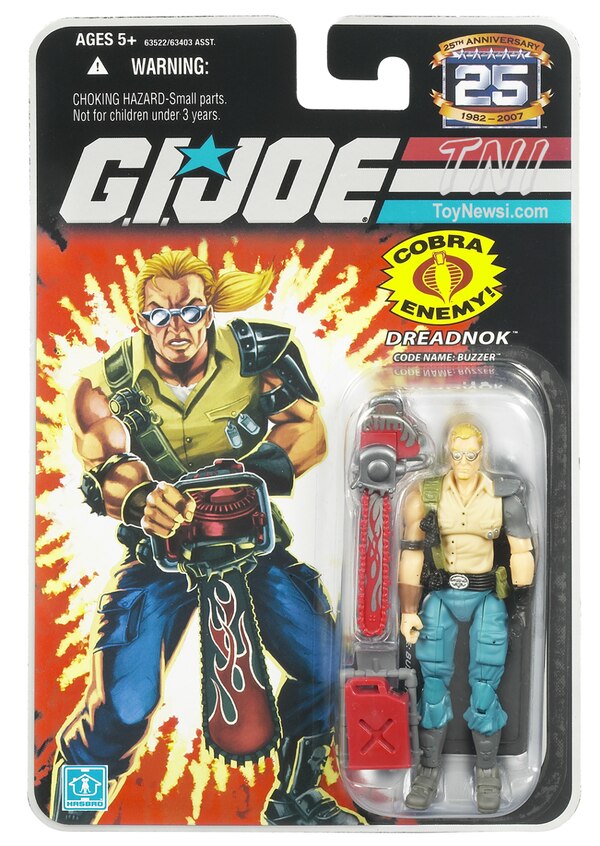 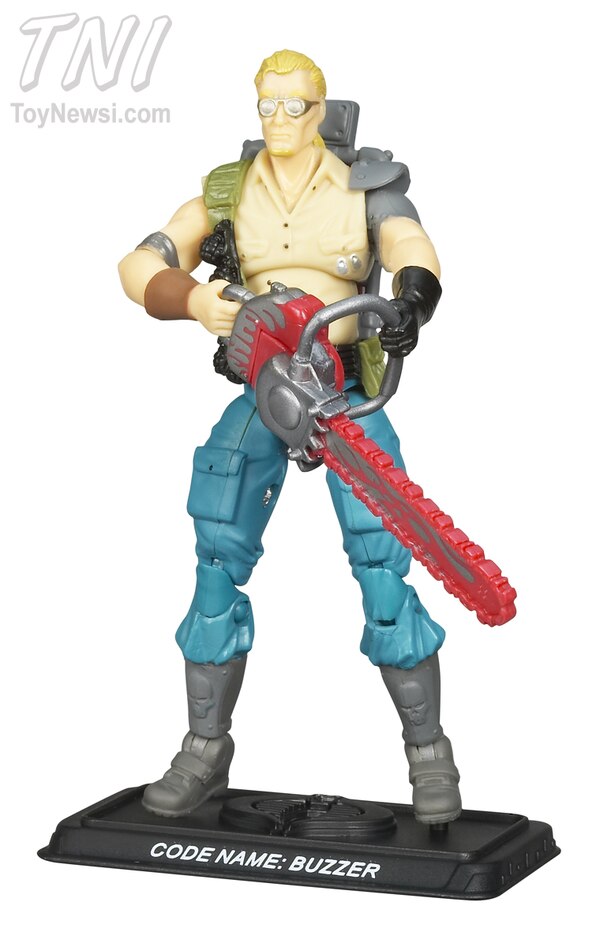 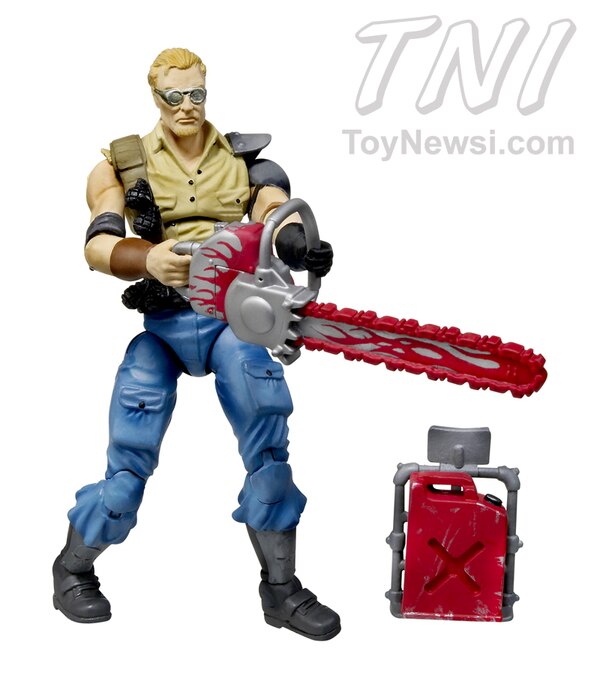 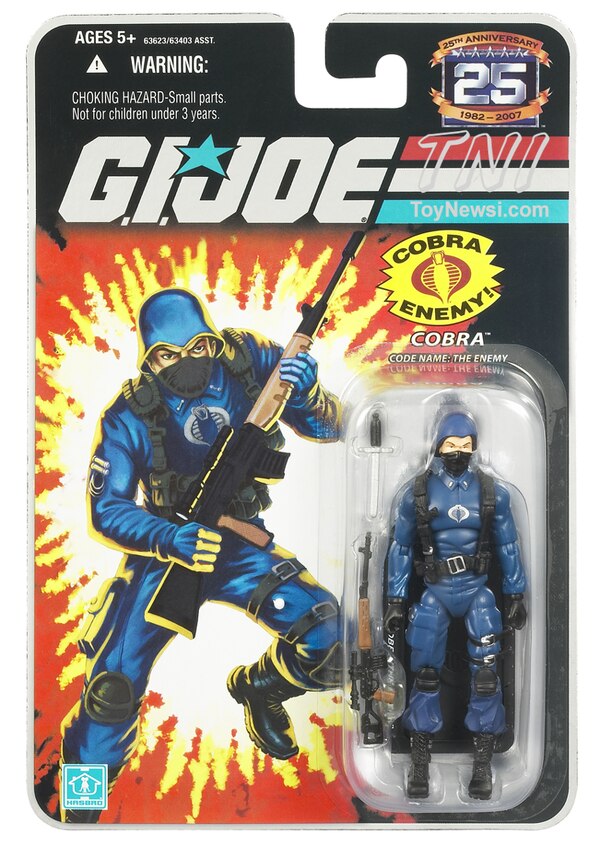 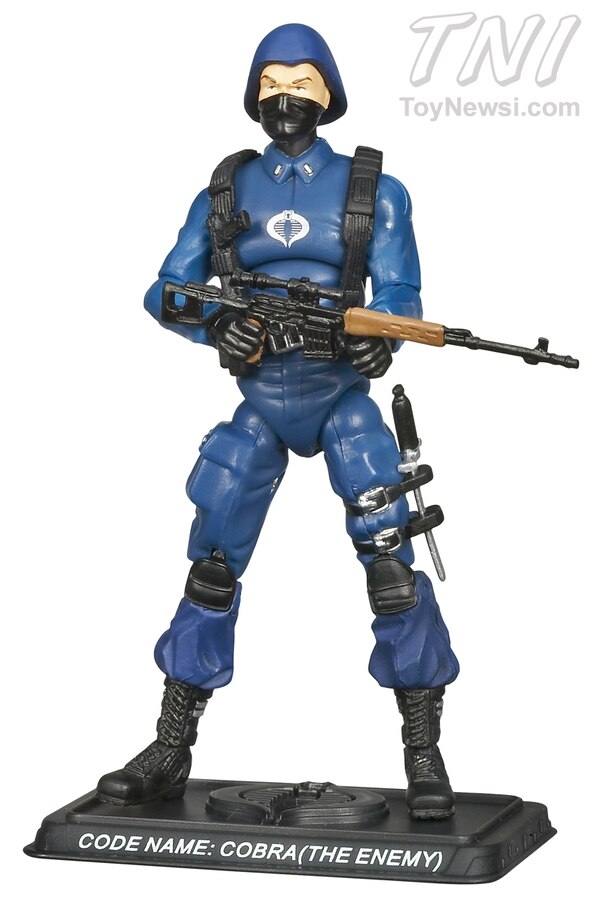 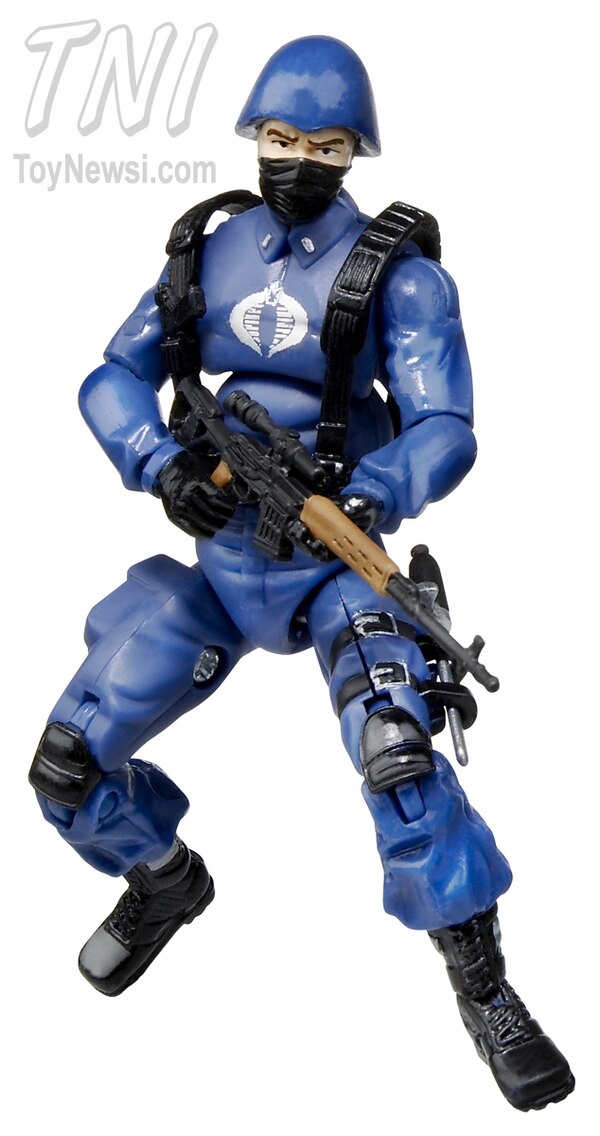 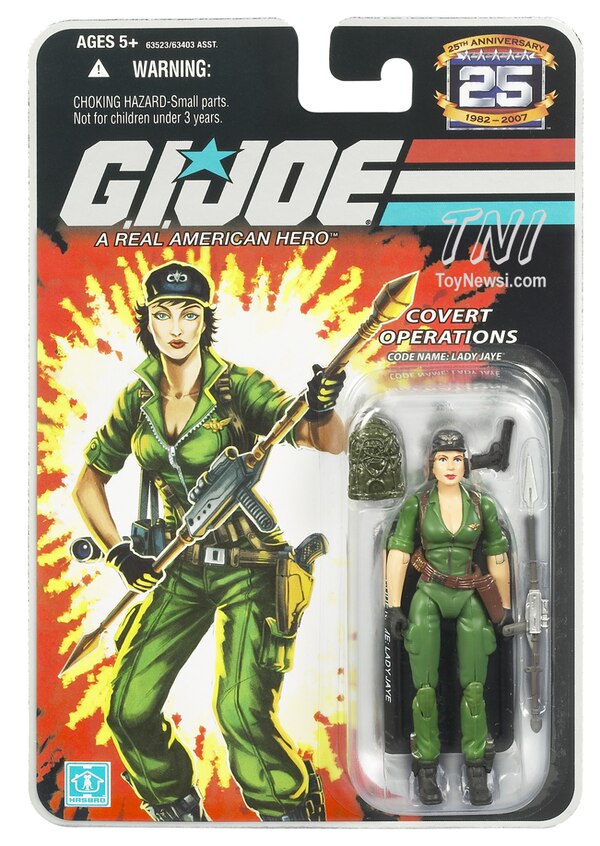 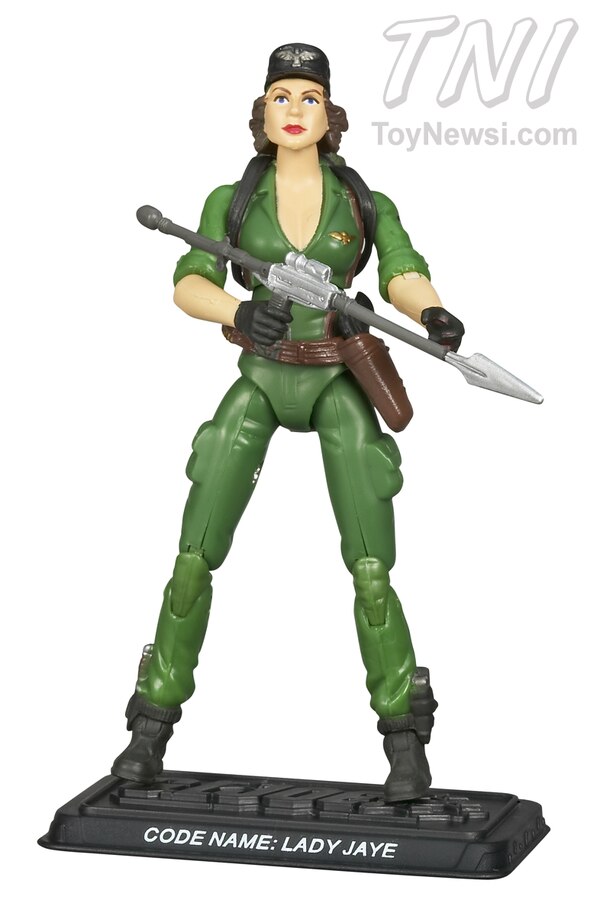 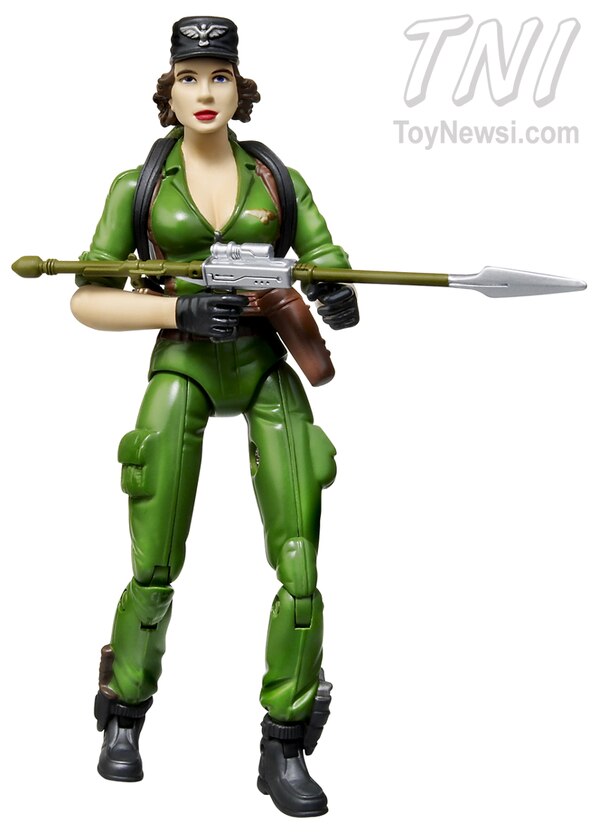 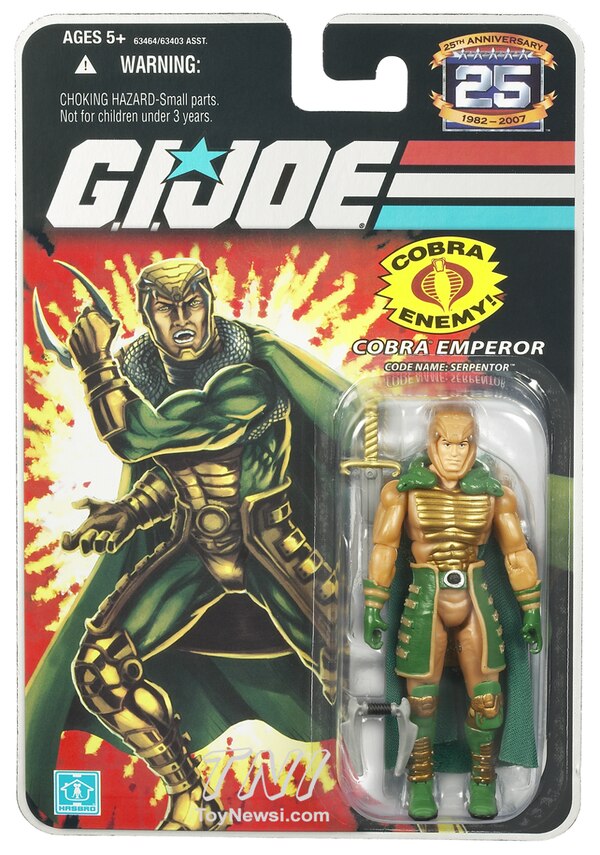 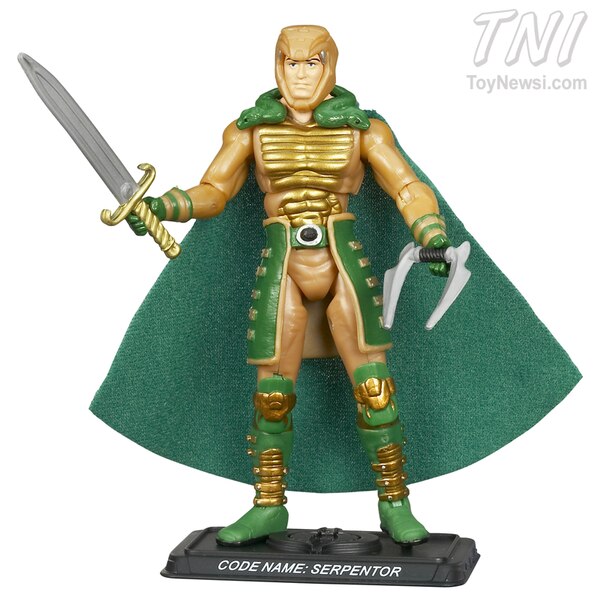 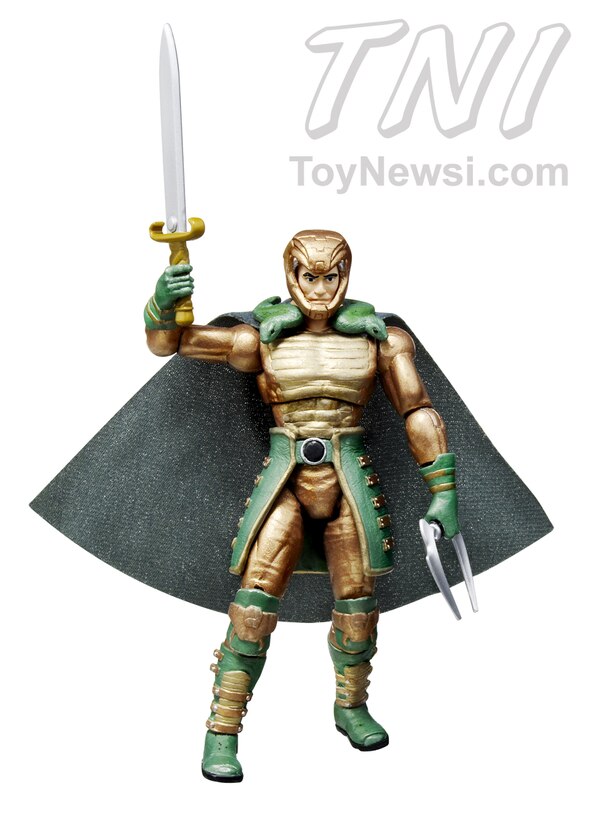 Yup, its a single carded SE v1 (probably all black?) and Flash.

Cool I just saw the new back card!! From what I can tell......left to right are as follows:

Flash (which is awesome, one of the original Joes I actually liked!!)

I like Stalker and Beachhead. The rest...meh. I'm hoping it'll be like my experience with the five-pack Joes; they looked okay in pics, and then were alot nicer in person. Zartan? Ah...I liked the unpainted prototype better. I mean, I kinda like this version but...I don't know. Maybe he has too much silver or something. Something's bugging me about him and I can't put my finger on it.

What I don't like about Zartan is that fact that he has the black shirt underneath! DOn't bring any of that crappy DD stuff in here, leave this as classic ARAH GI JOE. I want to see them muscles, hell just use Roadblock or GH's mold and give him the shoulder pads!!! Otherwise a nice update, but again hating the clothes!!

Firefly could have been done using a mold that wouldn't have Beach Head's strpies!! @grumpy@

Something about Buzzer bugs me, just don't know what!

I like the line except Zartan. His old costume wasn't all that odd. But they got Shipwreck right, unlike that failed attempt that Sigma 6 tried.

Now where are Tomax and Xamot?

I love them all, except Serpentor...I miss the overexagerated hood. That and his face makes him look like he'd rather be elsewhere.

Got to looking at this auction on eBay:

And I noticed that either buzzer is really short, or Serpentor is really big. I hadn't really seen any of these figures that close to one another before, but there does seem to be a sizable difference between the two.

Are you saying that PDD isn't normal? @smilepunch@

Look at all the complaints about Botcon with them doing Thundercracker, Thrust and Dirge in Classics.

The best answer, though, is exclusives suck.

Yeah. The Joe team has always seemed to be smarter about this sort of stuff then the Transfromer team does. They seem to understand what they can and can't get away with without making a large number of the fans POed, but still making those that go happy. I think the TF team just greenlights anything that Brian Savage puts on their desks if they don't have plans for it in the next 6 months. And then when it backfires they have to make excuses as to why they did it, like that retailers won't buy more then three repaints/remolds of a mold. Which the Joe line has shown to be untrue considering the Trooper alone has 5 in less then six months and SS and CC each have 4 a piece. Course that was more of a Hasbro defender excuse, I don't think anyone at Hasbro said that. Ot that they didn't know that the line was going to continue when they green lighted it. Which isn't an excuse just a lack of foresight and further proof that they don't understand as they thought the line wouldn't sell well enough to continue.

So I don't think the Joe team will be dumb enough to make the Crimson Twins a con exclusive, but if Aaron Archer ever becomes head of the Joe brand then you better just abandon all hope.

Are you saying that PDD isn't normal? @smilepunch@

Not really, no, it isn't. It's more of a "novelty" thing like the original.

Part of it is that we already HAVE a Destro, so the con exclusive was fine for those that wanted one. Also, the figure doesn't really fit in with the other characters, other than as a novelty, and yes that includes the weirdos like Raptor. I mean "Pimp-Daddy"?

Look at all the complaints about Botcon with them doing Thundercracker, Thrust and Dirge in Classics.

The best answer, though, is exclusives suck.

Yup, its a single carded SE v1 (probably all black?) and Flash.

Jet Pack Trooper: Where does this guy "come from"? Was he in the comics? Probably so since the web gear is painted "comic colors". Suppose it works okay for him.

He is from one of the old Marvel comics. There was a comic 3-pack that came with 2 of them and Lady Jaye. The comic that came with them actually only featured those troops in one shot, getting out of a truck.

Could anyone direct me to the picture of the card back that showed sillouettes of Snow Job, Crimson Guards, etc...?

I don't think that applies, really. I think they just slapped parts together to make the figure and that he isn't "real". Might depend on how they do the filecard.

Though it looks like the helmet/gas mask are removable. And it's nice to see the J.U.M.P. again.