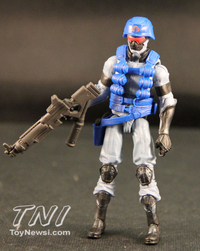 At first look, Hasbro’s new G.I. Joe: Retaliation wave 1 Cobra Trooper looks to be a winner with an updated modern look and a cool parachute feature reminiscent of the old Skystriker toy. Join us as we take a closer look at this figure to see if first impressions hold true or if it’s cannon fodder unworthy of joining the ranks of your Cobra army. 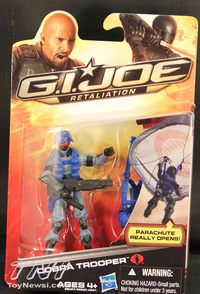 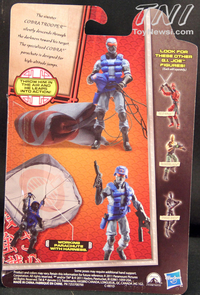 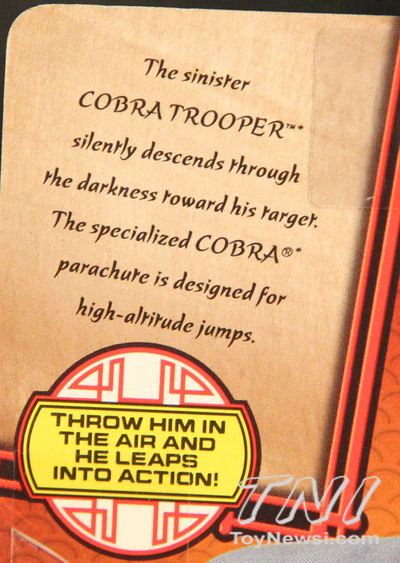 Packaging - Like with all the Retaliation toys, this figure comes packaged in the generic yellow and brown colored cardback which features that same image of Roadblock and Snake-Eyes at the top with the figure displayed underneath with its accessories.

The back features images of the figure highlighting its accessories along with a very brief bio. On the right side are images of other figures being released in the wave.

The packaging is basic and somewhat boring, but the biggest drawback is the lack of traditional filecard. I hope Hasbro decides in the near future to bring those back because they are an important part of the G.I. Joe mythos. 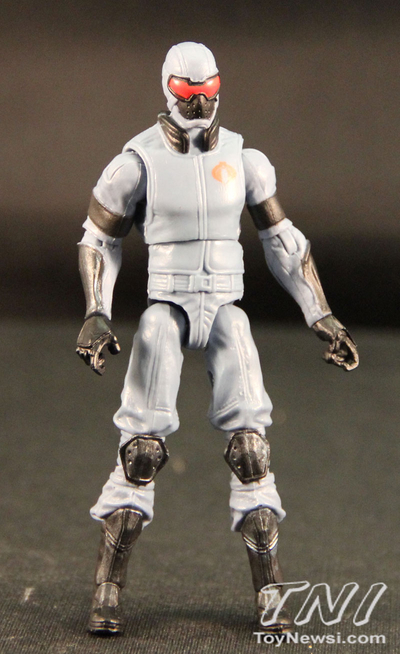 Sculpt - I really like the way this figure looks at first glance. It incorporates a mixture of the realism we have seen in recent years in the Pursuit of Cobra line while incorporating some of the more classic Cobra looks from days gone by. Without the webgear, the figure is pretty generic looking with a standard jumpsuit look. The boots, knee pads and wrist guards are sculpted on to give the figure a more armored look and feel. The wrist guards are sculpted in the shape of Cobra heads. There is no detailing on them to suggest that is what they are supposed to be, but that is how they struck me when I first saw the shape of them. The mask completely covers the figure’s head with big red goggles and an almost hockey-looking mask covering the face. It almost looks like something you would see Snake-Eyes wearing. The figure has a removable helmet, but I think it looks better with the helmet on.

The figure comes with two different sets of removable webgear. One set is made to look like standard trooper gear. It has 6 grenades sculpted on the front and a useable gun holster to the left side. The other set of webgear is made to look like something a halo jumper would wear. It features a packed chute on the front and has straps that stick up in the air to attach the workable parachute. We’ll go into more details about the workable parachute in the accessories section of this review.

The biggest drawback to the sculpting is how they sculpted the hands. I believe the intent was to sculpt them so he could hold the straps of his parachute which works well. The problem is the hand look awkward doing anything else including holding the weapons he comes with. I think an extra pair of hands would have done wonders for this figure. 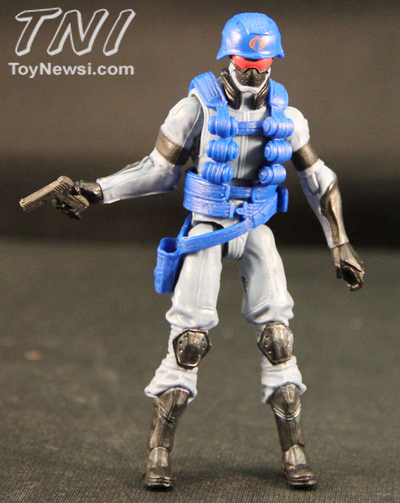 Paint - For the majority of the outfit, Hasbro chose to use a gray/blue color while incorporating black with a metallic wash on areas like the boots, gloves, knee pads and wrists guards. As I mentioned before, these parts of the figure seem to portray an armor look and feel which I think works well. A Cobra logo is painted on the chest of the figure so if you choose to display the figure without any of the webgear, he still has the disguising Cobra symbol on him which is nice. The parachute webgear and helmet also have Cobra logos painted on them. The helmet and webgear are done in a sharp looking blue. It’s not neon but it really stands out on the figure since all the other colors are more bland. That and the red on the goggles give this figure a look and feel that is more traditional to what I expect when I think of Cobra. I am sure there are those out there who like a more realistic look, but for me I really like how this figure looks. 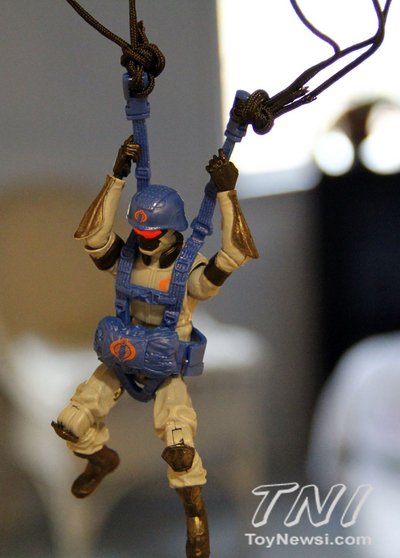 Articulation - The articulation on this figure is pretty basic. The head is attached on a ball-joint so he can look left and right. He can look down a little but not up. He has ball-hinged joints at the shoulders, swivel-hinged joints at the elbows, and swivel wrists and torso. The bottom half of the figure is pretty disappointing. He has single-jointed knees and no ankle articulation at all which makes it very hard to stand up without a stand, let alone put the figure in cool poses. 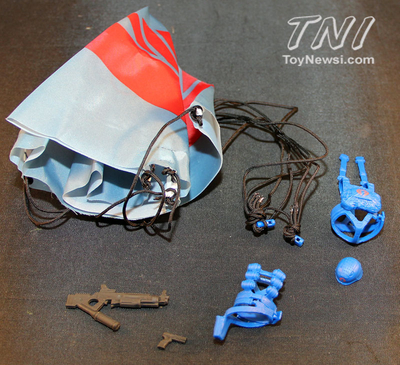 Accessories - He comes with a helmet which stays on pretty well. He has a pistol and a strange looking rifle which he does not hold very well at all. He can hold the pistol but it looks funny in his hands due to the way they are sculpted. He has two sets of webgear, one with a working gun holster and the other for use with the working parachute which is the final accessory. I’ve seen some images where it looks like they managed to put both sets of webgear on at the same time, but I was not able to get mine to fit both at the same time and I think the intention was for him to wear one or the other.

The working parachute feature is probably the coolest thing about this figure and even if you don’t like the figure itself, you may want to pick it up just to get the chute. The parachute actually attaches to the webgear so you can use this with any of your other figures. Granted the parachute webgear looks kind of funny without the parachute attached because the straps to attach the chute stick straight up in the air.

The chute works well and has a really big Cobra Logo painted on it so it looks cool when he is floating down in the air. 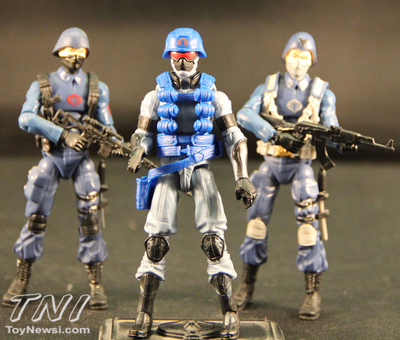 Fun - As I mentioned before, the working parachute feature makes this figure a lot of fun and is probably the biggest saving grace for the figure. The lack of ankle articulation hurts it a lot because you can’t get him to stand very well let alone put him in cool battle poses. The way the hands are sculpted also hurts the figure as far as getting him in cool battle poses, but they work well when using the parachute. 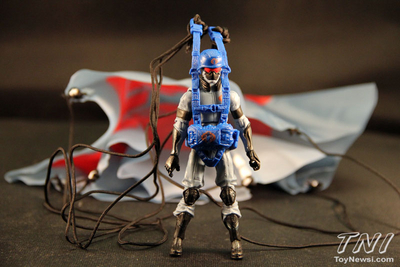 Overall - In the end, I like the figure and am happy to add him to the ranks of my Cobra army. The figure is far from perfect and certainly is not one of the better made figures in this line. The lack of articulation on the bottom half of the figure and the way the hands are sculpted really hurt this guy, but the fun factor of the parachute helps make up for that. A better choice of rifle would have helped some. What could have been a great figure is only an average one due to these flaws but again I really like the working parachute and the overall look of the figure so to me that makes it worth buying at least one or two. 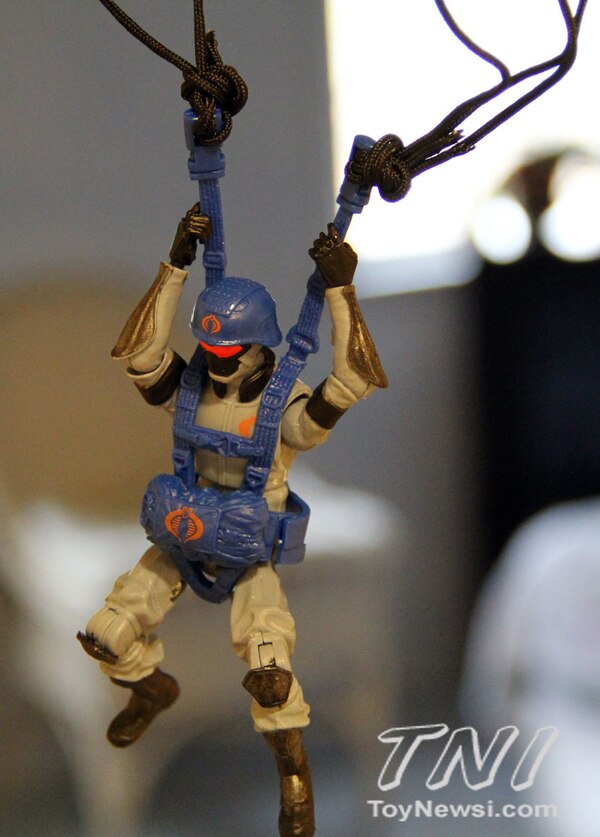 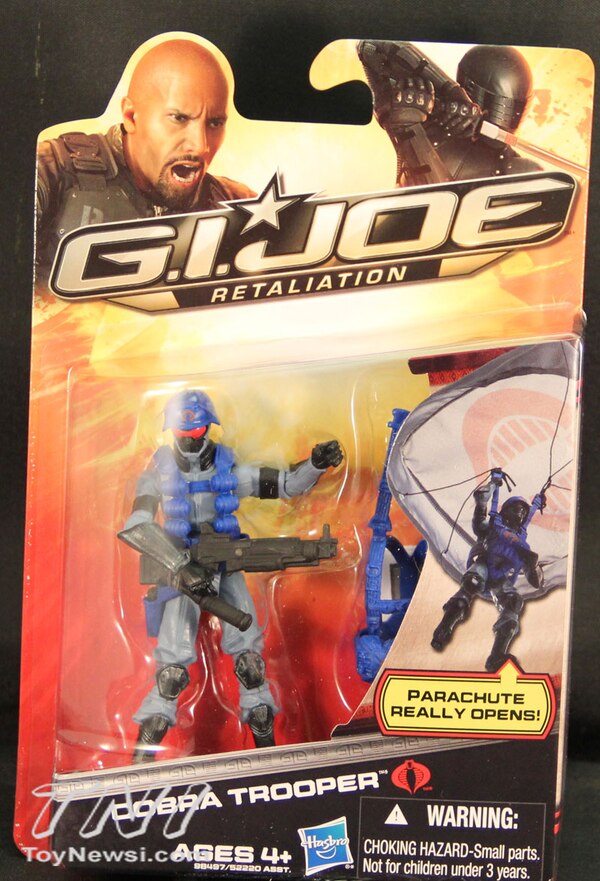 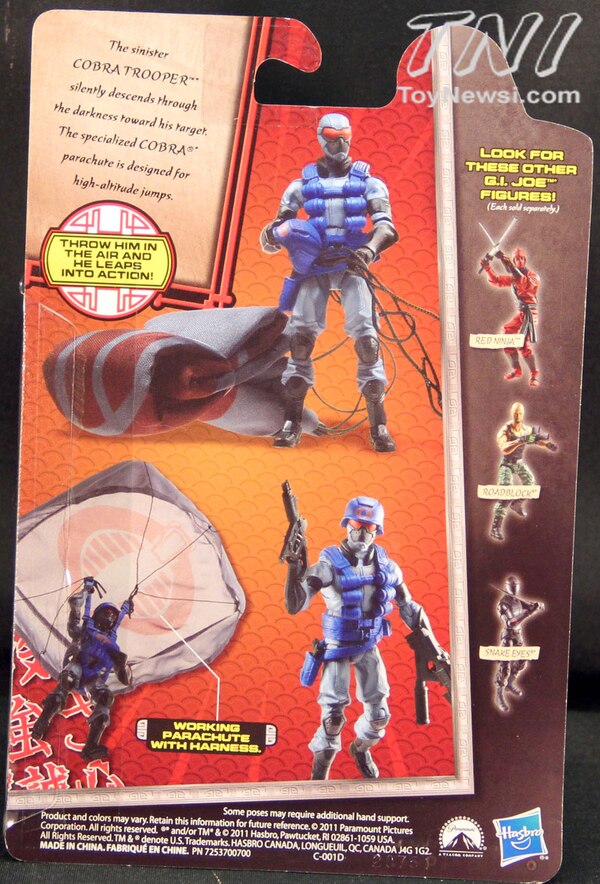 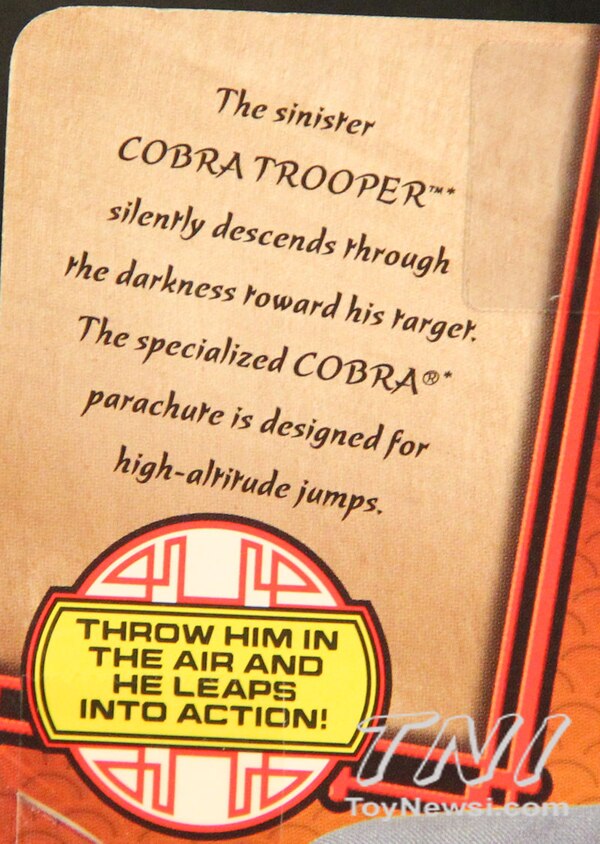 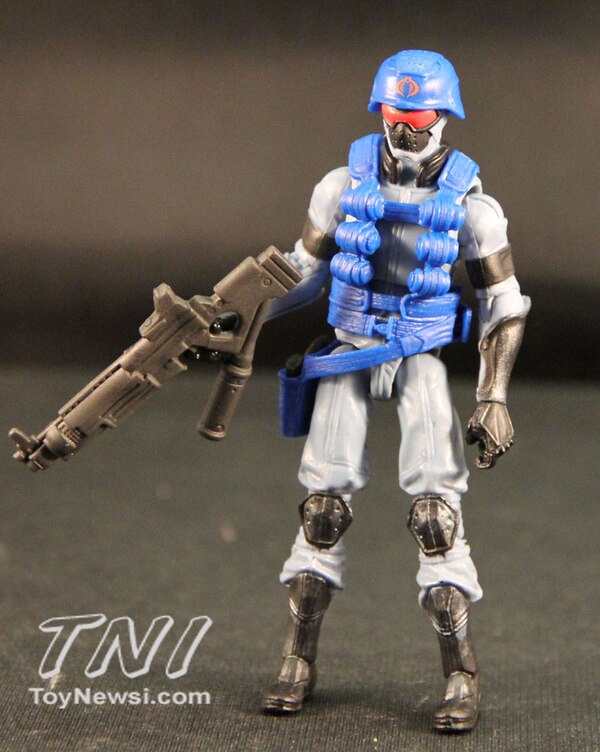 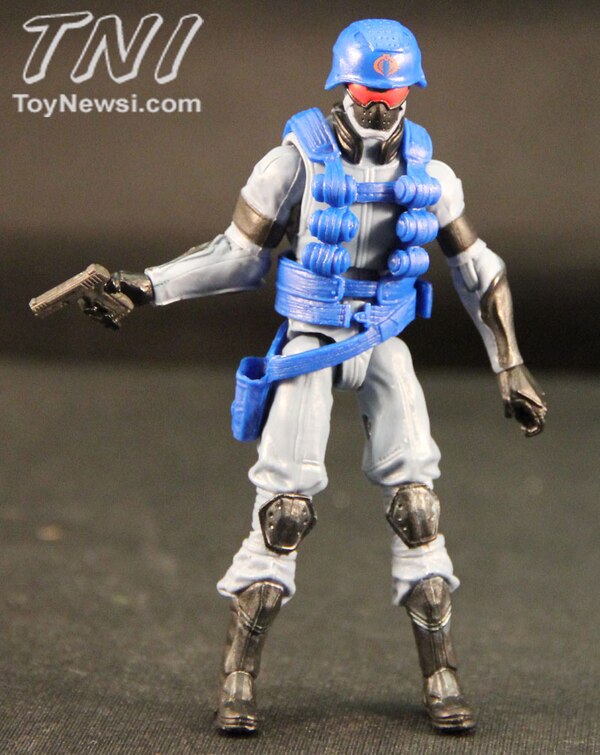 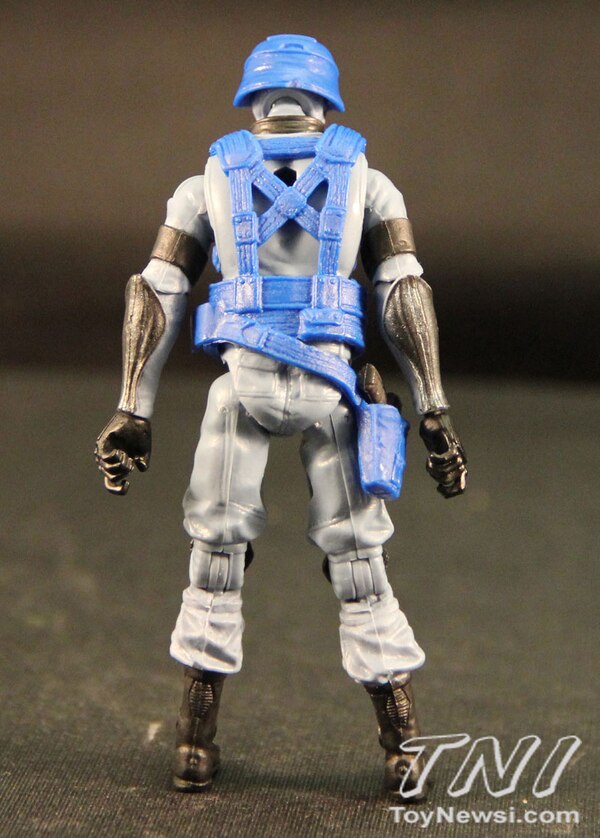 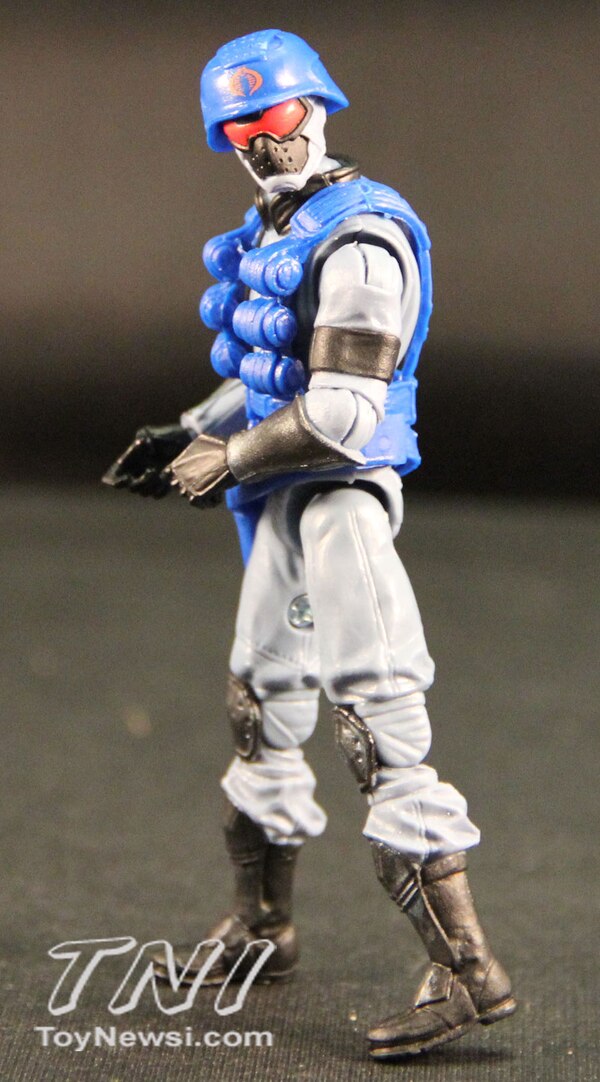 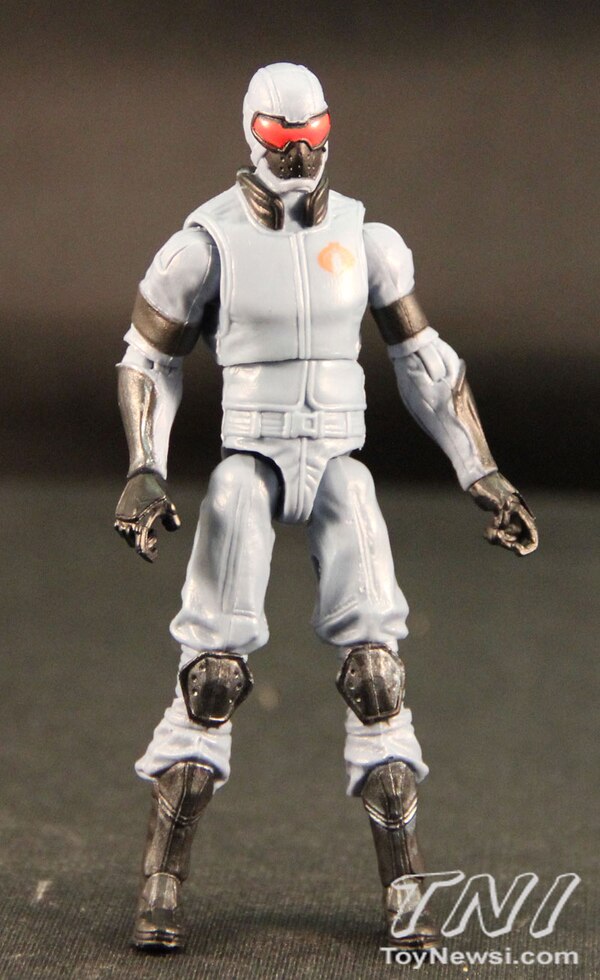 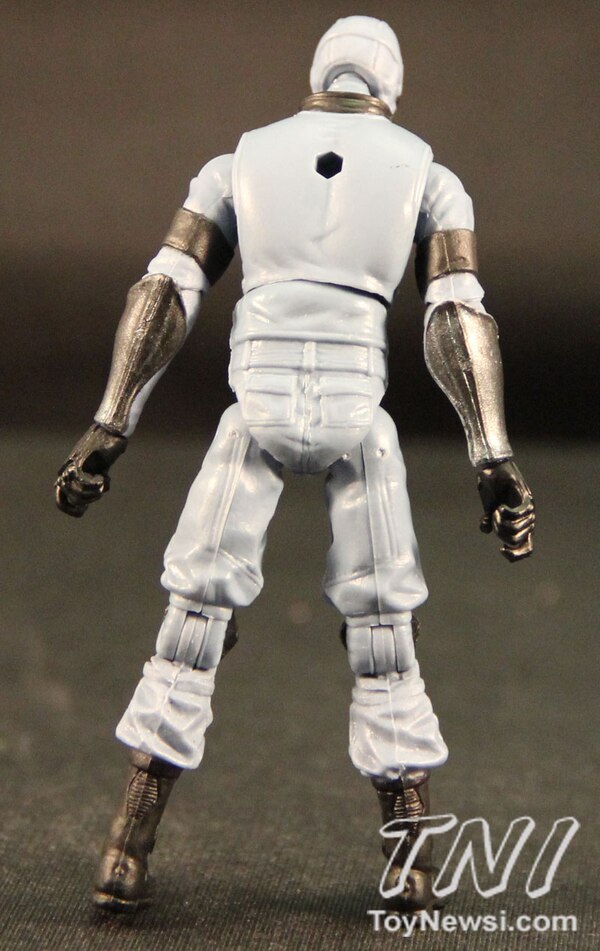 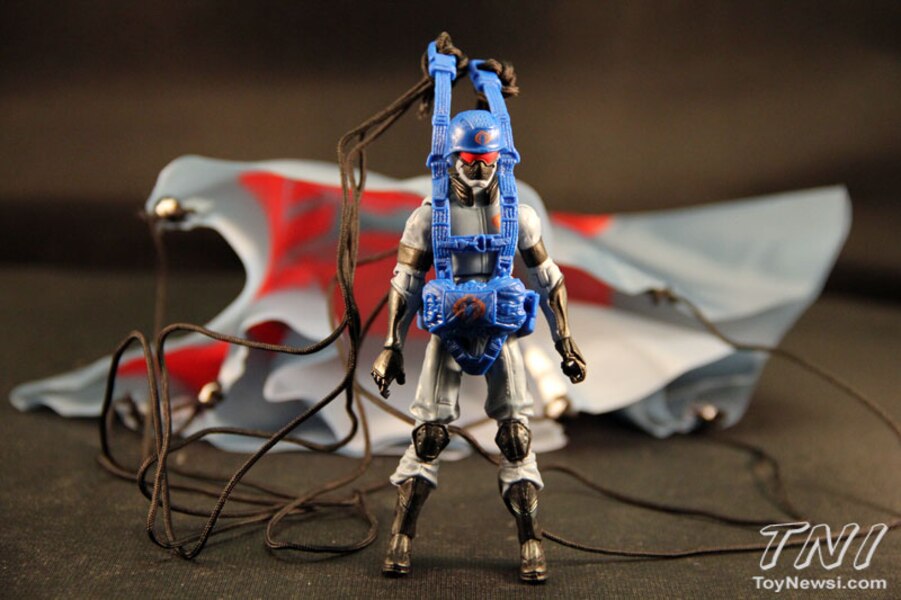 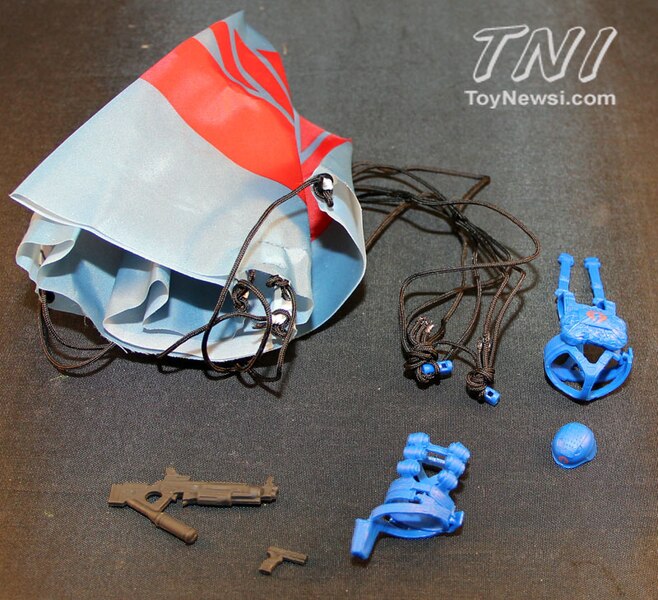 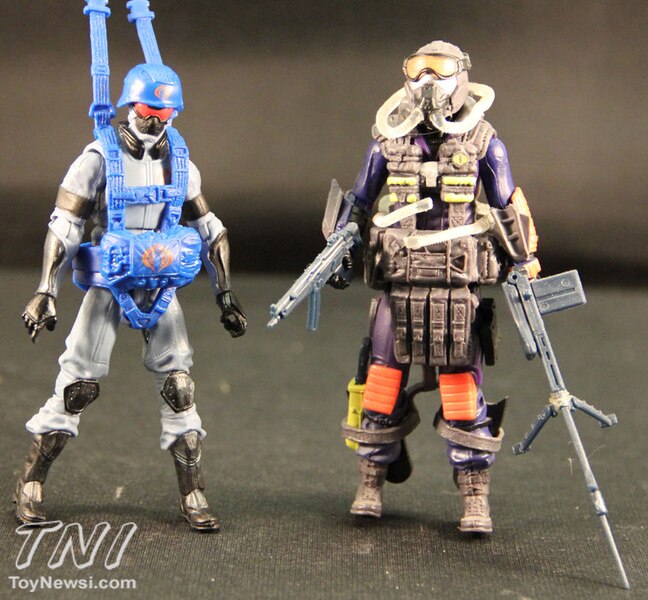 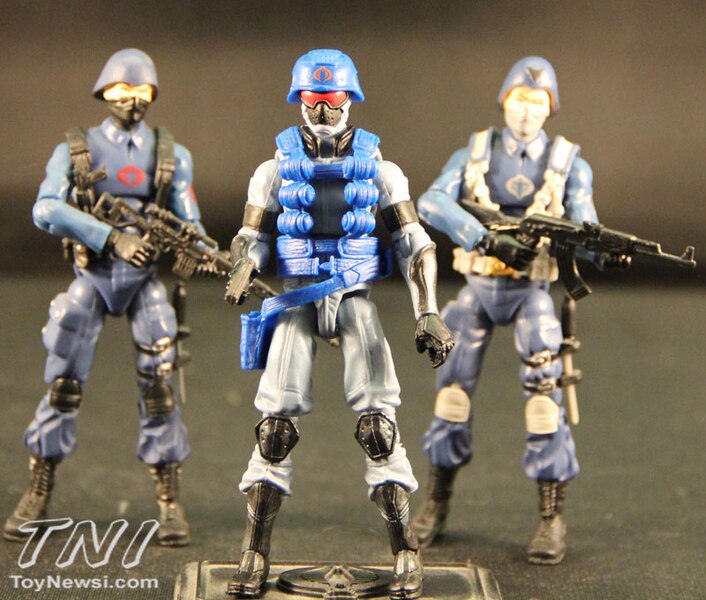 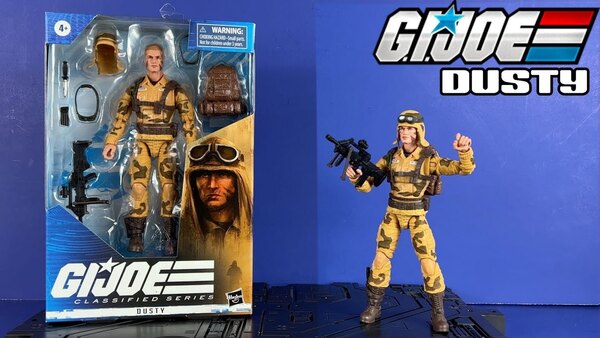