GI Joe
by Jay Cochran
July 13, 2014
Thanks to the folks at ACToys we have new in-hand looks at the upcoming G.I. Joe 3.75" 50th Anniversary figures which will be sold at Toys R' Us and online etailer stores.

Here is a list of the 50th Anniversary product being released later this year:

Check out the in-hand images below.
Image 1 of 26 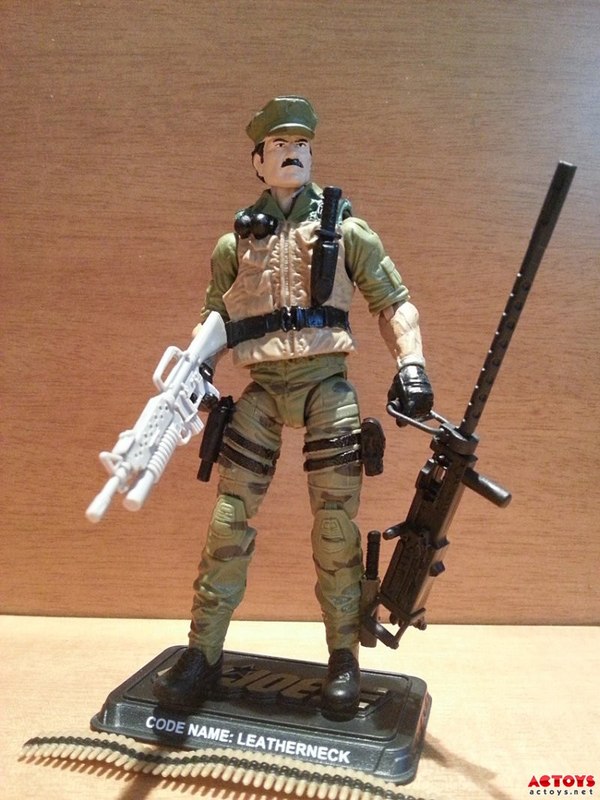 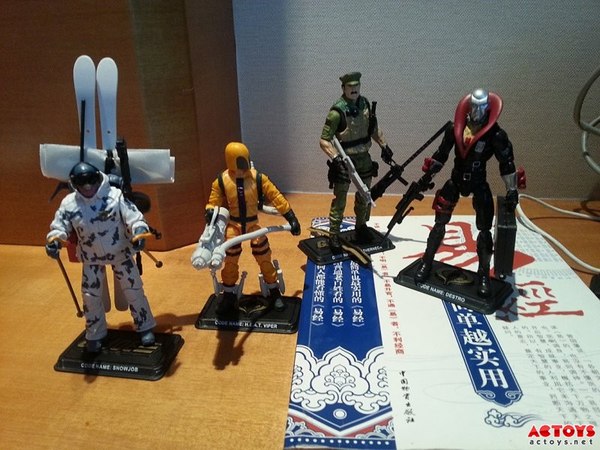 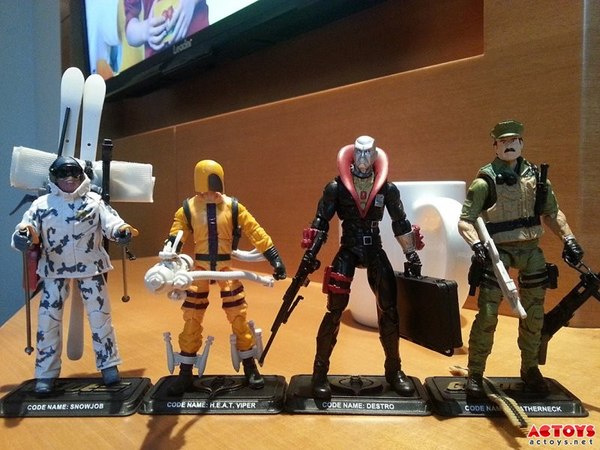 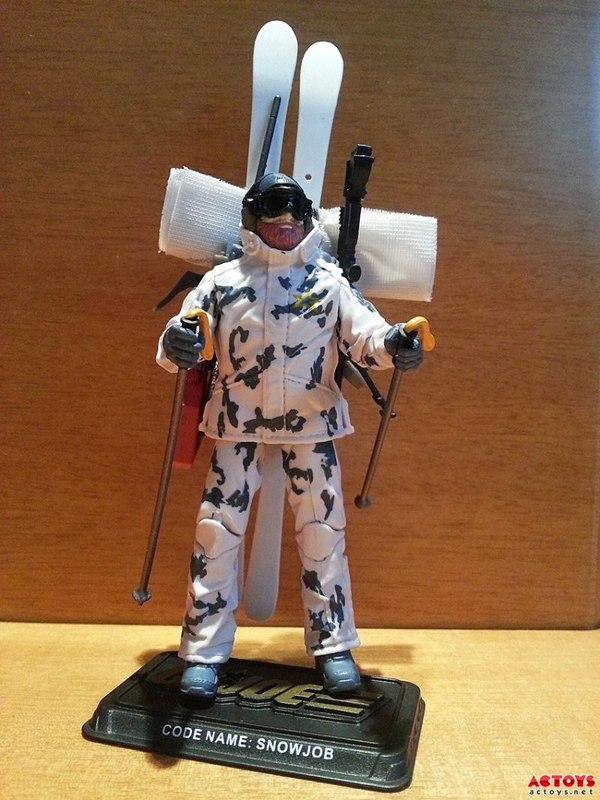 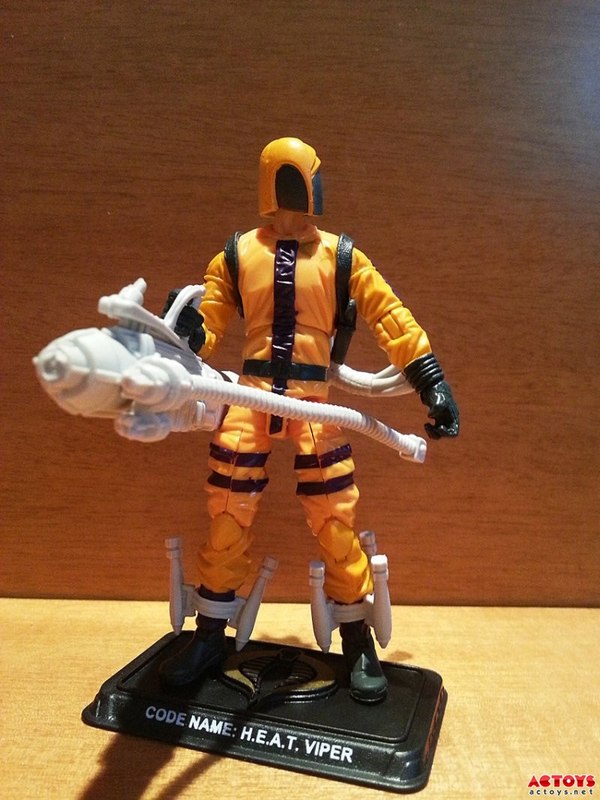 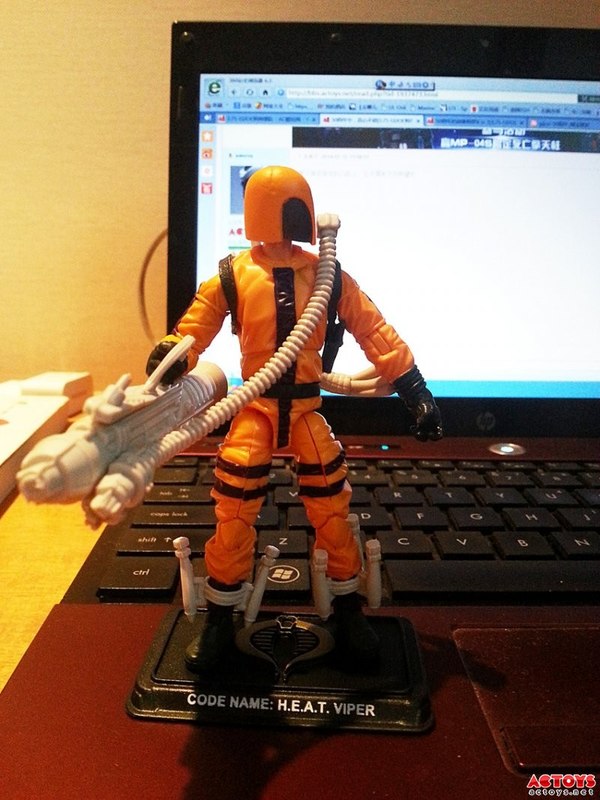 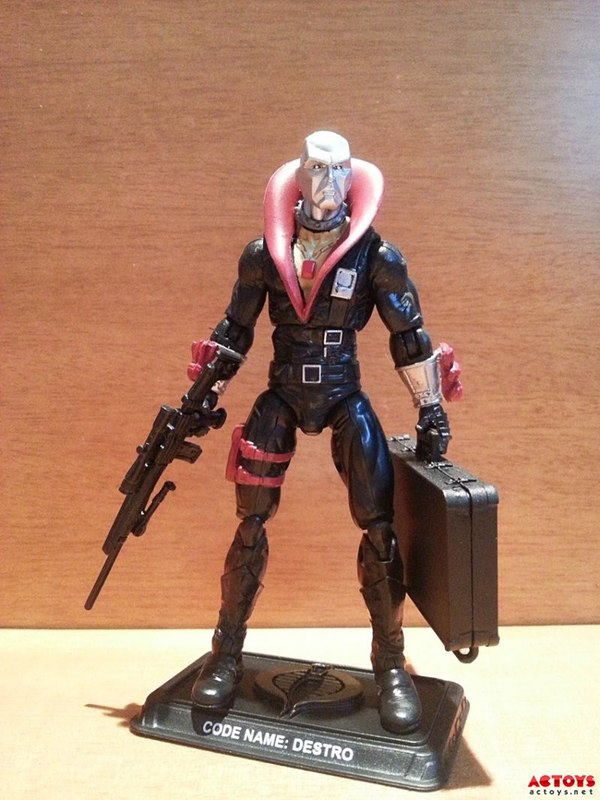 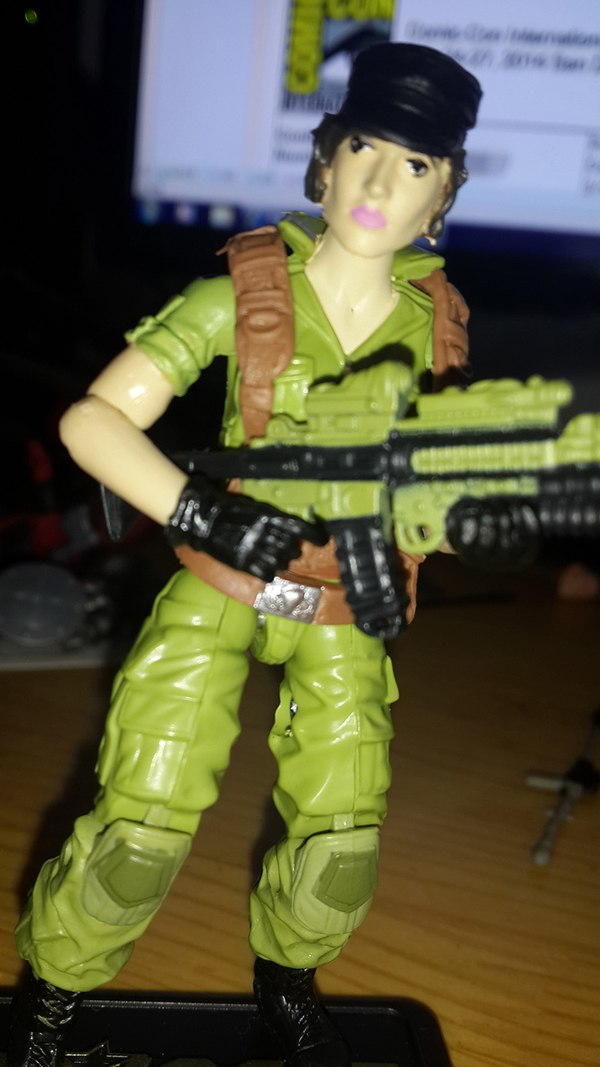 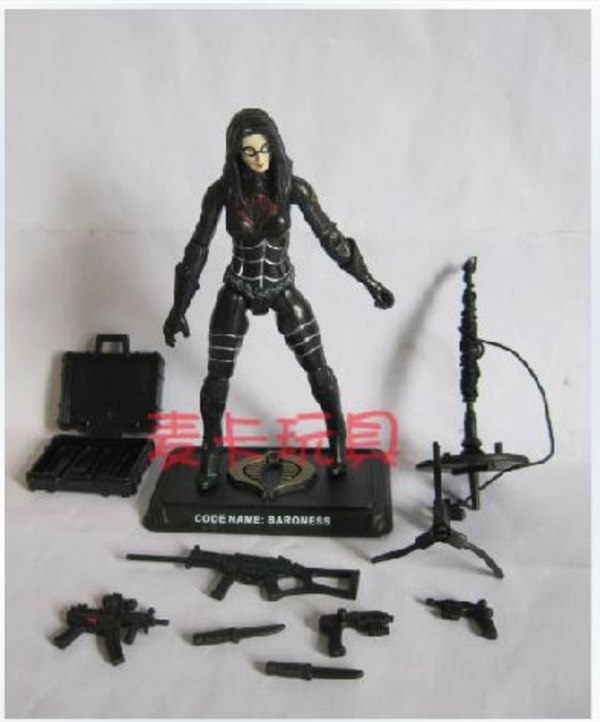 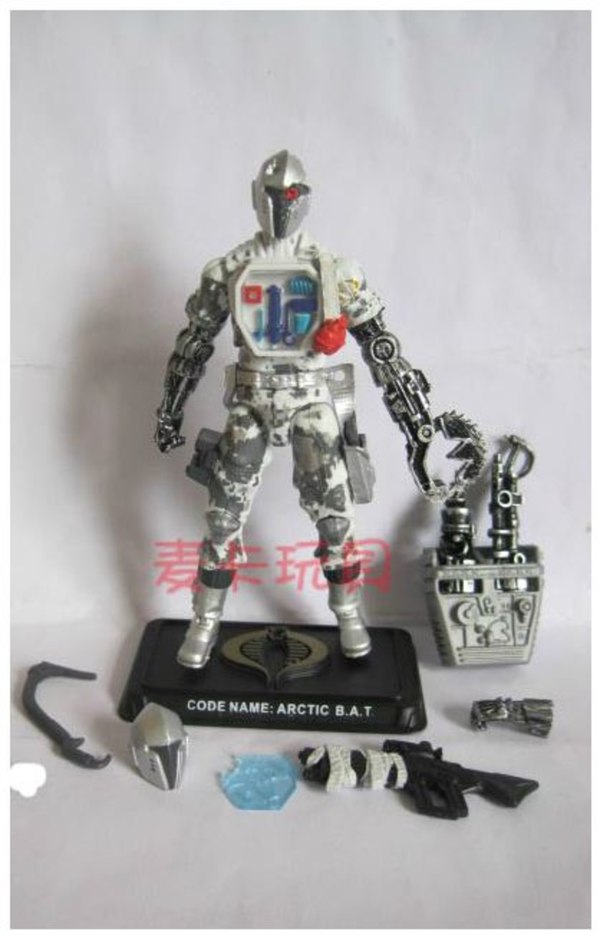 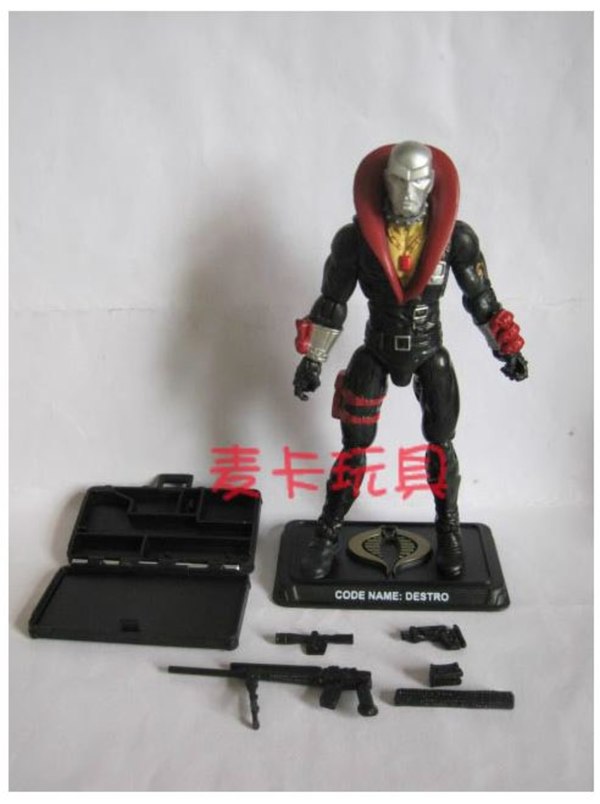 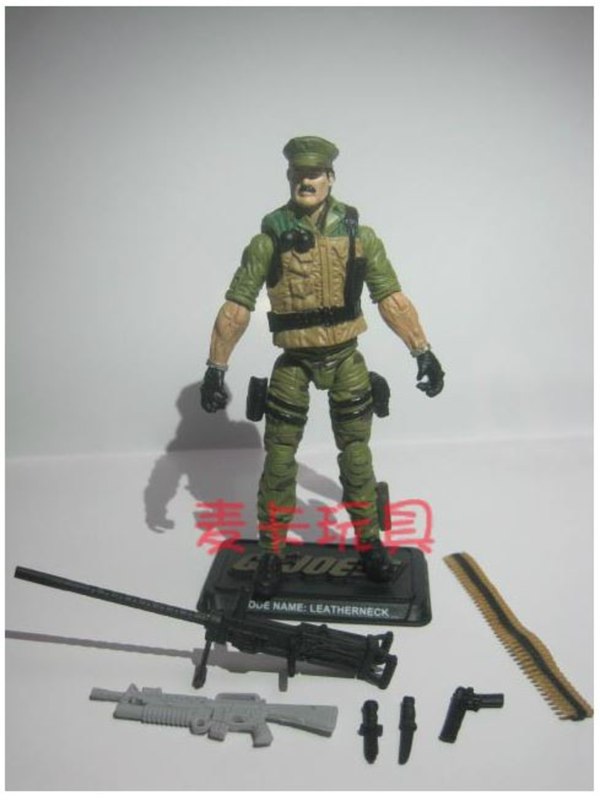 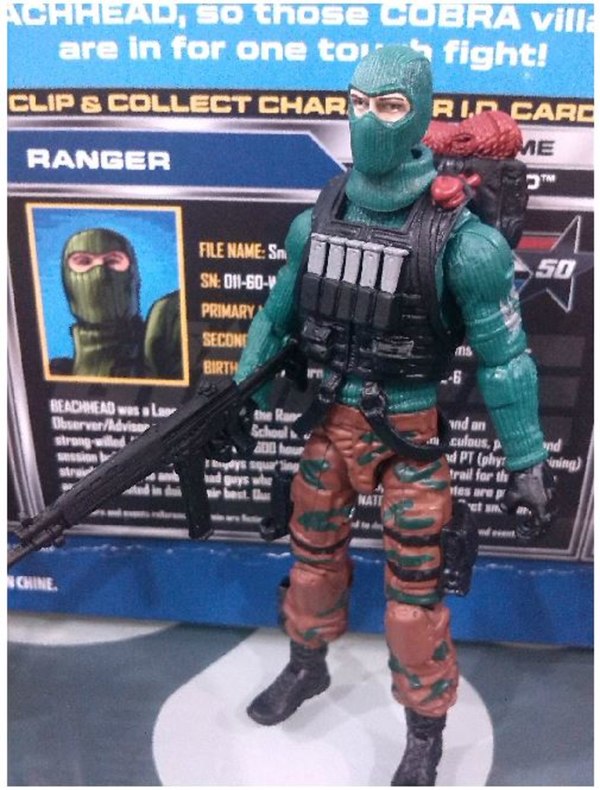 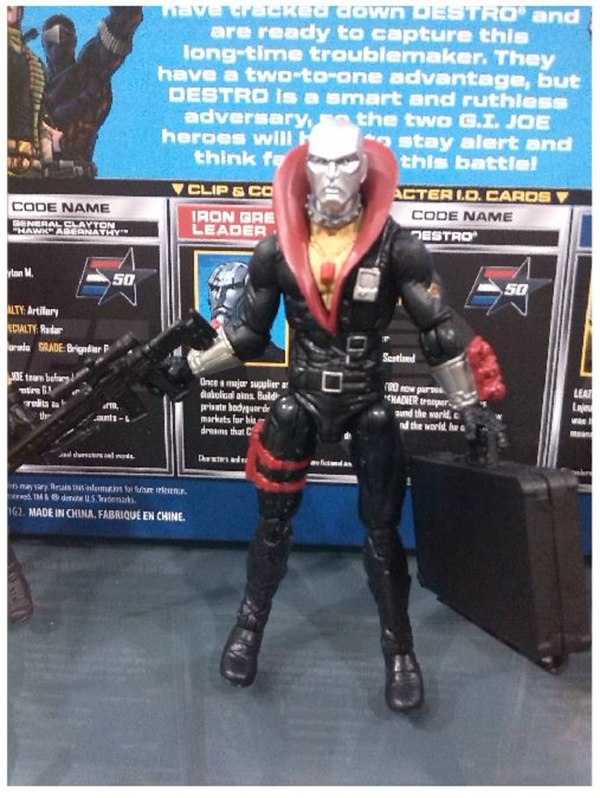 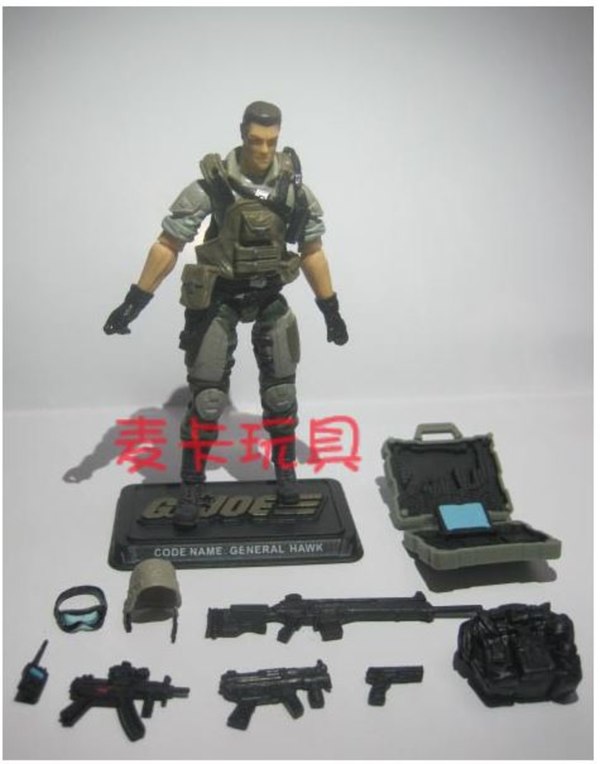 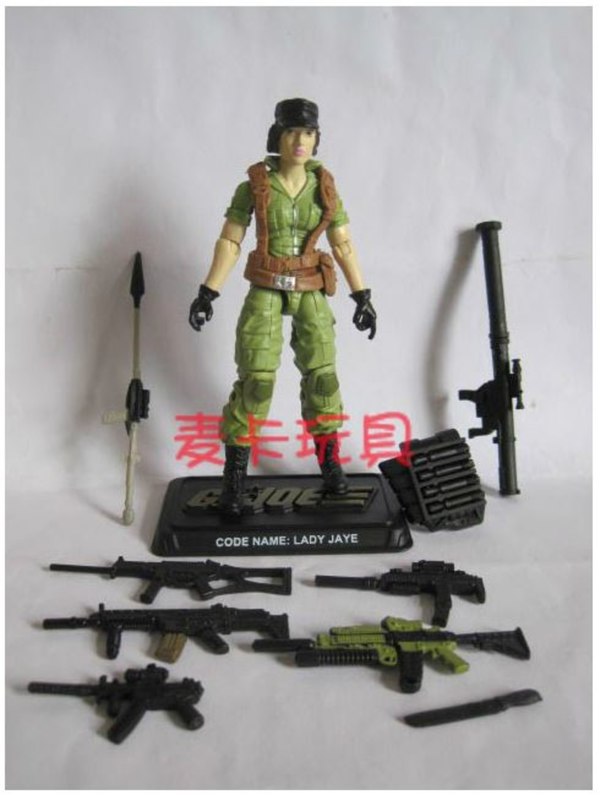 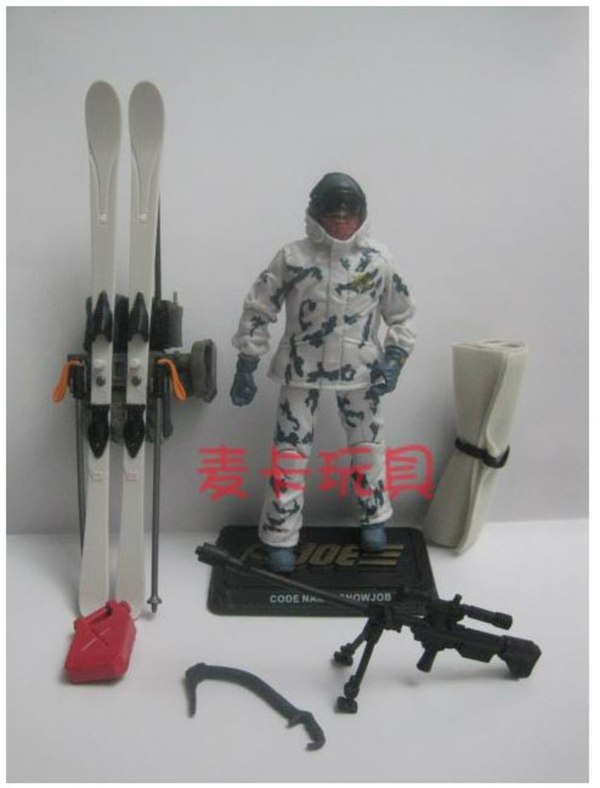 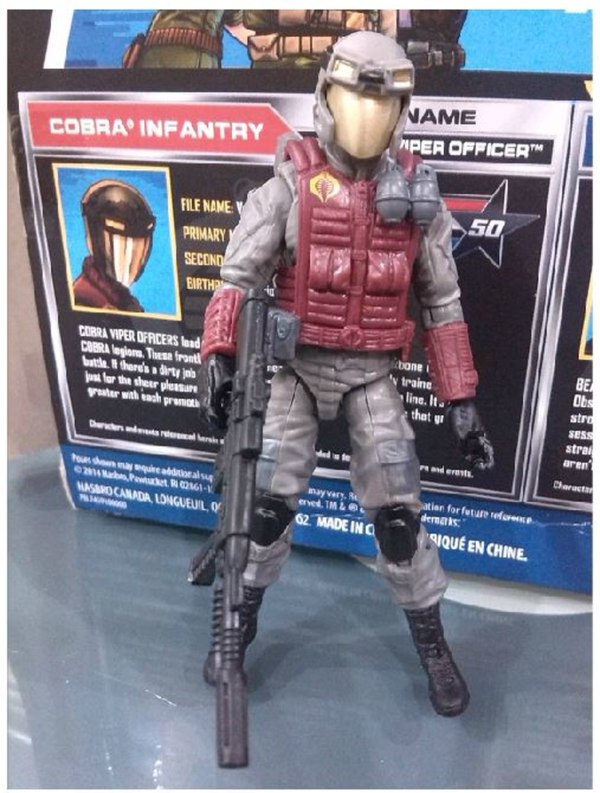 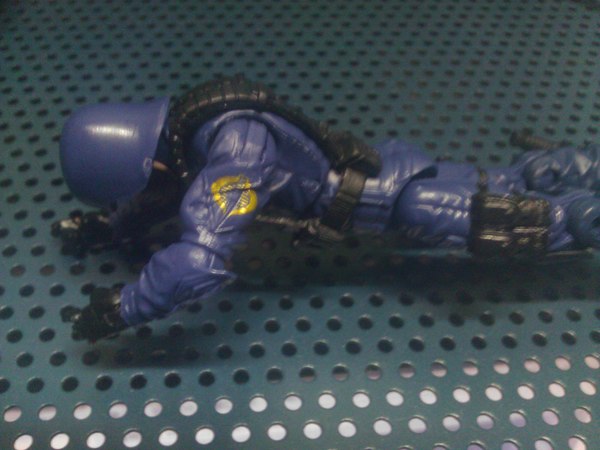 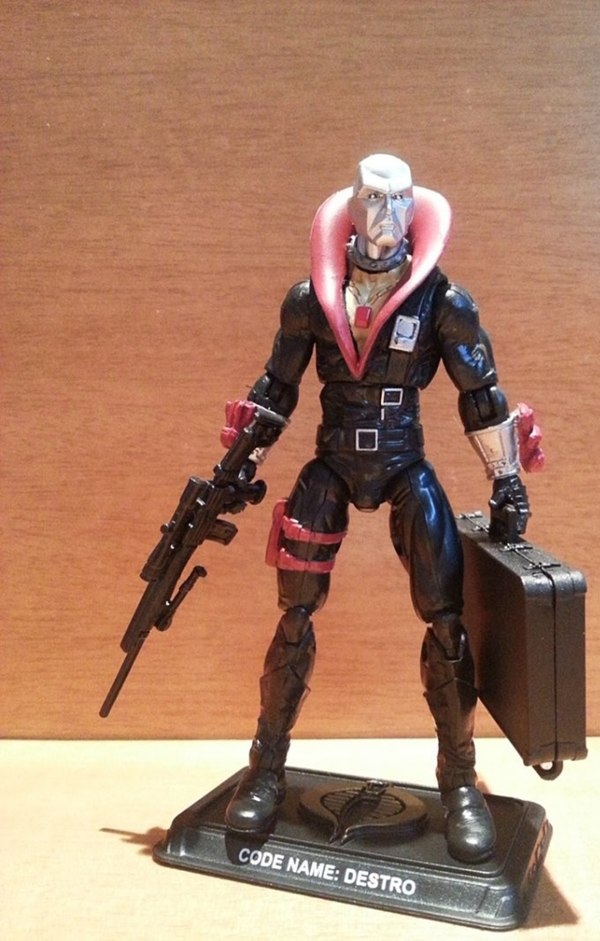 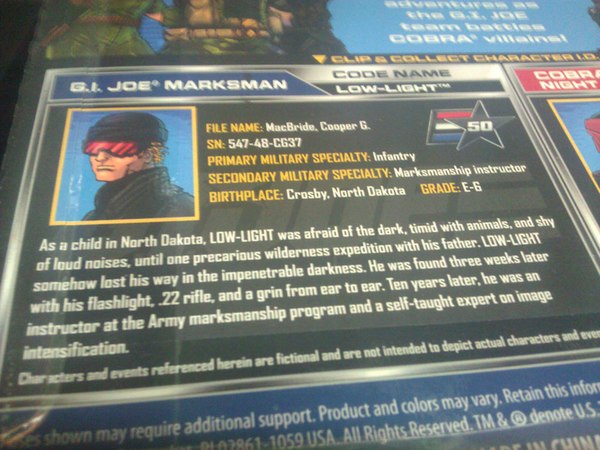 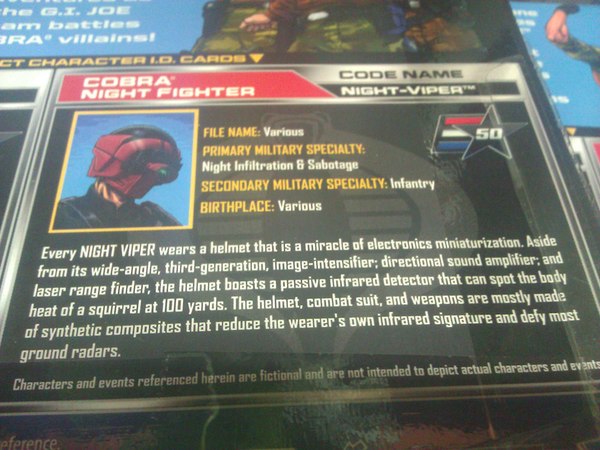 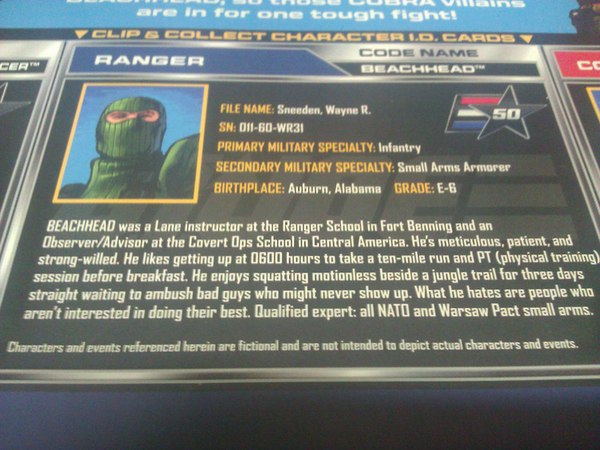 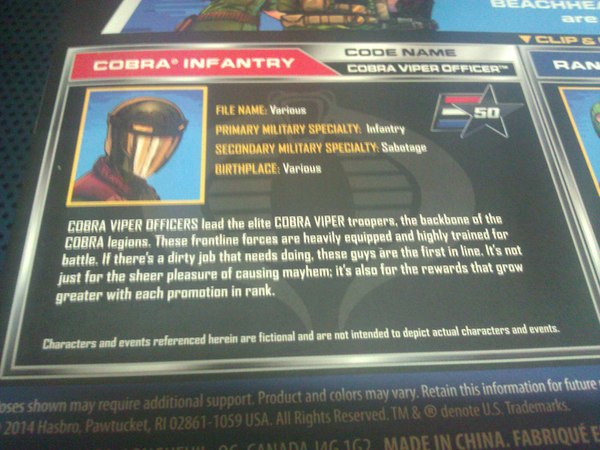 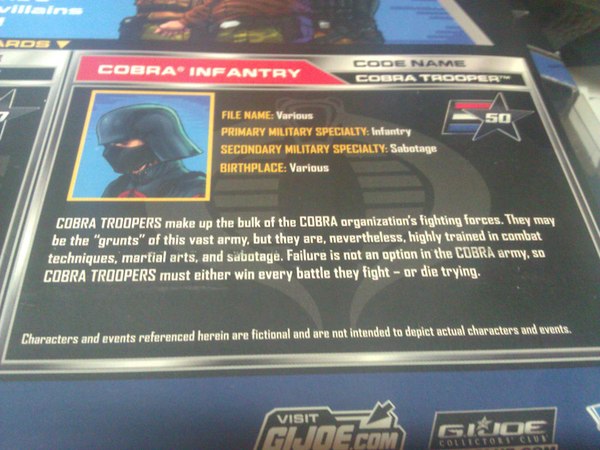 I a short while ago decided to buy the Snow Job V.S. Arctic B.A.T. set from the Canadian TRU site, especially after I read a review on either JoeBattleLines.com or General Joes(I forgot which site). Wasn't going to originally, but I decided to after looking at the review.

1 thing I notice after seeing some side by side pics, is that whatever the Pursuit Of Cobra(POC for short) Snow Job was green, is now blue on the Snow Job in the 50th Anniversary Set. Didn't really realize that until I looked at that review. So unlike some of the other 50th Anniversary sets, at least Snow Job is a slightly different deco. Granted, very slightly, but still slight. Still think Hasbro though could of made Snow Job a different person.

For myself, after looking at YoJoe.com, since I also already have the POC Snow Job, what I was thinking of keeping my POC Snow Job as himself, and instead use my 50th Snow Job as Blizzard(Specifically, the Verison 2 look from the 1997 TRU 15th Anniversary Arctic Team Set), since both Blizzard and Snow Job had red hair, and Verison 2 Blizzard had a beard since he was a repaint of Verison 3 Frostbite. At least this way, I can now add have a different character than another Snow Job, and not worry about doing any little custom painting to make the 50th Snow Job different from the POC Snow Job. Here's a link from YoJoe.com for their entry on Verison 2 Blizzard for those interested:

As for the Blowtouch V.S. Heat Viper set(I don't plan on getting it), I agree with people that Blowtouch should of been colour like the "Realistic deco" Chase/Rare Varaint version of the POC Blowtorch that didn't seem to have come out at all(Though there are rumours that it did get release overseas in limited numbers). At least it would of been different than doing the traditional Yellow suit again, and given people the chance to get that deco of the character.

The other is they could of done is make it kind of an Adventure Team homage based set. Have the Snow Job figure either be Snow Job or Frostbite with a Gold Adventure Team logo, or at the very least, make it "The Arctic Adventurer"(Make the hair colour different from Snow Job's red hair). Then in the story written at the back of the packaging, have it state that some Inuit locals have seen a strange snow creature of some sort running or rampaging around. The Joe(Reguardless if it's Snow Job, Frostbite, or "The Arctic Adventurer") investigates, and tires to capture the creature. However, Joe soon finds out that it's a damage Arctic B.A.T., and is soon in the fight of his life. "Can Joe survive his dangerous mission yet? You decide". By making it a Adventure Team set, it would help celebrate the Joe Brand's 50th Anniversary even more so, by going only slightly beyond the Joe V.S. Cobra mythos, but not straying from it too much.

By doing either or both of these things, it would of help make the Snow Job mold somewhat more different and special than the original POC Snow Job, instead of it just having a Gold Joe Star and that's it. Could help get the people who bought the POC Snow Job already rebuy the set again.

If they do any more 50th Anniversary sets, I hope they consider re-releasing the POC Iron Grenadier(Including City Strike Deco) And POC City Strike Destro figures in a 2 pack, and kind of make it more like a Iron Grenadier theme set of Destro and the Grenadier armed up and ready for a battle. Just wishful thinking in my part.

I can cross the 50th anniversary stuff off my list. Found Lady Jaye/Baroness and Snow Job/BAT on a late night TRU run. They had one of each.

Gonna ebay the Baroness and Snow Job since I already had the same figure from previous waves. If it works out the way 50th Hawk did for me, I'll make a good chunk of my money back.

they used the Rock/Roadblock figure as the base.

they used the Rock/Roadblock figure as the base.

haha yes you did thank you YJB....its funny now since you helped me out w/Hawk I found one at that discount score I hit last month....I got POC Hawk for 2 bux!.....it figures right?.....& now people are getting their POC Hawks & Lowlights galore....w/these new waves.....how's about a Red Jinx or Sgt Slaughter Hasblow....its the 50th Ann. how about a cool character for general release...instead we get a lazy wave......I'm not complaining too much I' buying these waves but I passed on the Beachhead 3 pack cause I have Cobra Regulars Galore & I don't need a bland version of the Viper....& Beach head is cool but he's always making the waves like Snake Eyes & Storm Shadow.....that Ninja Head has made Hasbro so much cash(hawhaw)....I wouldn't mind if they had re-released the Alley Viper version from Resolute.....or if they had just released the rest of the Concept Case Wave instead....that Rock N Roll looked great....my one other compliant would be paint apps.....I was able to secure an Danger at the Docks set but Flints arm is half as$ed painted & even Leather Neck appears to have some issues on his 80 year old veiny arms....he shoulda laid off the roids.....so far I'm glad we were able to get some Joes but I feel it fell short in the 50th year.....it could've been so much cooler like the 25th ann. resurgence but it just seems like a "here...shut up & be glad you got something fanboys" anniversary.....

Good news, GD. I hit my closer TRU this afternoon after work and while there were no new Joes on the pegs, a quick peek in the overhead compartment found me the Destro/Hawk/Leatherneck pack! Really happy with this set! Leatherneck and Destro are both awesome. Hawk is too of course but I already have the POC version and this one will go on ebay. What will you do with your extra Hawk? I know someone was able to hook you up with the POC version too a while back....

*Andy Rooney Voice*.....don't you hate that.....when that one time a year offer comes out, other than Xmas or your birthday & your loved one actually wants to buy you a toy.....and you find NOTHING.......you try to bargain or fool them into going into another boxstore that you have no business being in....but you have to come up w/an excuse of why we have to drive to the other TRU that's another 20 miles in the other direction...at 8pm at night.....on a worknight....w/the kids tired & whining about wanting to go home.....& you haven't even started dinner yet......& she wanted to catch America's Got Talent that night........yup...some hunts are like that....then days later when the hunt reconvenes...she's forgotten all about buying you that toy.....& you don't want to be uncool & say wellll lets go out & see if you can find me that toy I'm looking for.....doh'.....that's mah life YJB.....well I got lucky last night I found the droids...ahem 3 pack I was looking for...cept my Destro leg is gummier than a gummy bear left on a dashboard in an car in the downtown phoenix are during the hell days of summer......good luck man maybe you'll get some joe-love today or this weekend....@homer@