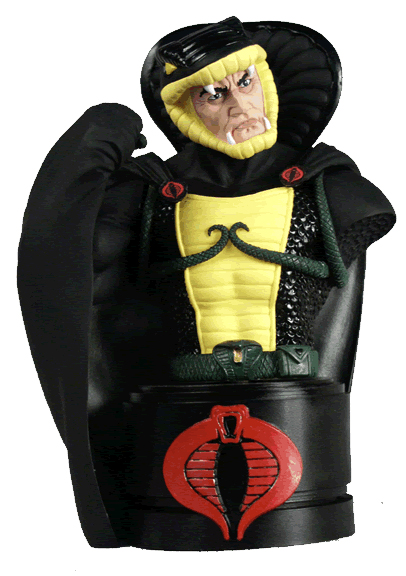 Cobra Emperor. A secret cabal of COBRA scientists combed the dusty vaults, tombs, and sarcophagi of long-dead despots, scraping together enough DNA to achieve a warped plan: a supreme leader dedicated to evil. They succeeded beyond their wildest dreams. SERPENTOR is a military genius, ruthless tyrant, fearless warrior, financial sorcerer, and political demigod. His plans are subtle, vicious, and intricate, making him a formidable enemy of G.I. Joe. Even COBRA COMMANDER has to watch his back in case his genetic brainchild tries to wrest control from him. The conquests of the distant past still echo in his mind, urging him to achieve the glory his DNA still remembers...and he'll stop at nothing to again grasp the world in his hands. "The greatest men of history flow in my veins, and my goal is to let them rule the world again."

Estimated ship date: May 2004 (subject to change without notice)

You can pre-order this item now at: