Are 6" G.I. Joe: Classified Figures Of Cobra Commander, Baroness And Gung-Ho On Tap For Wave 2???

GI Joe
by Jay Cochran
March 08, 2020
If you caught our news on Friday, then you know there is a strong likely hood that their will be a second wave of 6" G.I. Joe: Classified figures coming from Hasbro which will contain 6 figures. Three of those second wave figures are likely to be movie based and three are likely non-movie related.

While the listings for the second wave that have surfaced online contain code-names to keep the identities of the actual figures a secret, we have to wonder if Hasbro didn't already give us a clue during Toy Fair of what they will be?

You see at Toy Fair, the folks at Hasbro handed out this poster (see below) which features a total of 9 main characters. We aren't counting the Alley-Vipers or the red Ninja's dudes, because they seem to be there more for background along with the vehicles. That's not to say we won't see figures for them made eventually.

For the main characters featured on the poster, we know (or 99.9% know) 5 of them will be included in wave 1. Those characters are Duke, Scarlett, Roadblock, Snake-Eyes and Destro. The last two aren't 100% confirmed, but again we are pretty sure they are coming in wave 1.

So that leaves 3 remaining characters featured on the poster with Gung-Ho, Cobra Commander and Baroness, and 3 unknown non-movie related characters slated for wave 2. Coincidence??? Only time will tell I guess. 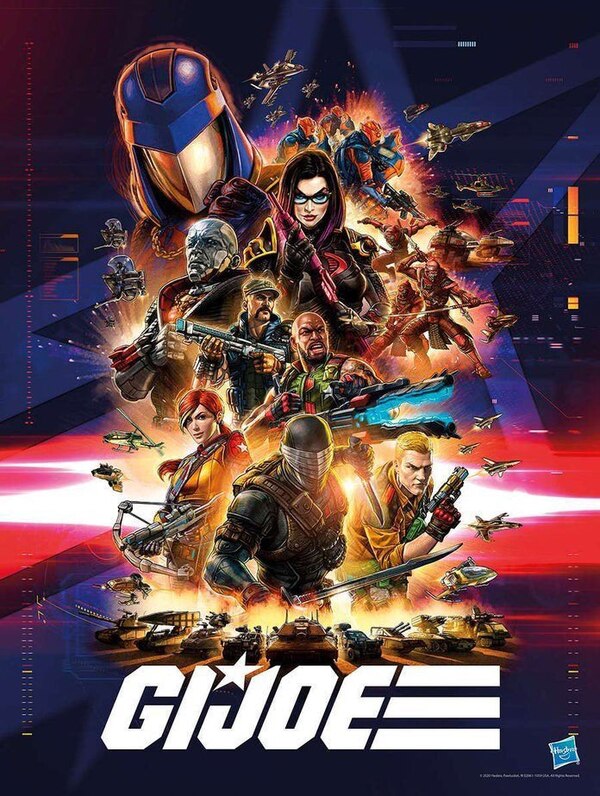 Woah...glad they gave a lot of weapons for Snake eyes..love the display stand for the weapons

I wish I had been smart enough to preorder these initial figures. Amazon Canada sold out, and don't know when they'll get more. The only place to where I can pay in Canadian dollars and not get raped by shipping costs. Lesson learned.

I actually saw someone post a pic somewhere who did a photoshop job on the Destro figure making him look like Pimp-Daddy Destro. If I see it again I'll post it. Looked pretty good.

Got the snake eyes, which is a awesome figure with one of the best packaging Ive ever seen. Pre-ordered Destro but debating on maybe only duke.

Oh ok... They did a great job in the repaint, I don't even notice it was Photoshopped...

Looks like a bigger version of the 25th anniversary edition of the figure.

I'm not sold on this figure.