Miscellaneous
by Jay Cochran
June 01, 2010
To celebrate the highly anticipated theatrical release of “Toy Story 3,” Toys“R”Us® is helping kids worldwide reach “to infinity and beyond” by creating the ultimate “Toy Story 3” destination in all of its nearly 1,300 toy stores in 34 countries around the world. In the United States, kids can “Live the Adventure” in stores and online at Toysrus.com/ToyStory starting today when they visit dedicated “Toy Story 3” boutiques, filled with the largest assortment of “Toy Story”-inspired toys, including action figures, construction sets, role play accessories, musical instruments and electronic devices. At Toys“R”Us, kids can find everything they need to continue the movie adventure at home with Woody, Buzz Lightyear and the rest of the gang. Similar “Toy Story 3” boutiques will open in Toys“R”Us stores around the world, coinciding with the movie’s release in each respective country.

“For nearly 15 years, kids and kids at heart have imagined that the toys they find in Toys“R”Us stores can come alive and have their own adventures thanks to the magical storytelling of the “Toy Story” films,” said Karen Dodge, Senior Vice President, Chief Merchandising Officer, Toys“R”Us, Inc. “The powerful connection to toys evoked by the films match our brand perfectly, and to bring this playtime experience to a new generation of kids, Toys“R”Us stores are now showcasing a broad assortment of “Toy Story 3” merchandise, including dozens of items that can only be found in our stores.”

“Since 1995, Toys“R”Us has consistently offered “Toy Story” fans a place to find items based on their favorite characters, including Woody, Buzz Lightyear, Jessie, Hamm, Rex and

MR. POTATO HEAD,” said Vince Klaseus, senior vice president of global toys for Disney Consumer Products. “With the introduction of new characters like Lots-O’-Huggin’ Bear and Twitch, as well as the addition of LEGO construction sets and characters based on Barbie doll and Ken®, kids will find more “Toy Story 3” items than Andy can fit into his bedroom when they visit Toys“R”Us stores.”


Toys“R”Us Stores in the United States Invite Kids To “Live the Adventure”
To kick off the celebration, “Toy Story 3” has received a dedicated space at the front of every Toys“R”Us store in the United States. Inviting kids to “Live the Adventure” of the newest DisneyźPixar film, each boutique features images of classic “Toy Story” characters, such as Woody, Buzz Lightyear, Rex, Bullseye, Slinky Dog, the Aliens and more. Inside the boutiques, children will find an exciting assortment of interactive toys, games, trains, playsets, role play accessories, construction sets and everything else needed to help bring “Toy Story 3” to life. “Toy Story” fans should also note that Toys“R”Us stores nationwide will receive regular shipments of new “Toy Story 3” merchandise throughout the year.

The company’s international flagship store, Toys“R”Us Times Square, is also featuring a dedicated boutique near the store’s main entrance on 44th Street and Broadway to showcase “Toy Story 3” products. Visitors can find out what it is like to become a “living toy” with a life-size, walk-in “Toy Story 3”-branded action figure package. Kids can also soar over the three-story toy store on the indoor, 60-foot Ferris Wheel which features Woody, Buzz Lightyear, Jessie and the Aliens.

In the week leading up to the film’s June 18 theatrical release in the United States, customers who purchase $25 worth of “Toy Story” merchandise from Sunday, June 13 to Saturday, June 19 will receive a complimentary “Toy Story 3” movie ticket, while supplies last. For more details, customers should check the company’s newspaper circulars. “Toy Story” fans will also be treated to additional special promotions at Toys“R”Us stores throughout the year.

Telling Toy Stories Online and On-The-Go
To help prepare kids and collectors for the theatrical arrival of “Toy Story 3,” Toysrus.com/ToyStory has become a playroom for all things “Toy Story.” Bringing together a broad assortment of “Toy Story 3” toys, the site also features content that fans crave, including downloadable coloring sheets and wallpaper for iPod touch and computers. As an added bonus, shoppers can also find videos highlighting the unique features of the hottest “Toy Story 3” products.

And, since everyone knows the characters from “Toy Story” can’t be contained on the silver screen or the computer screen, they’ll even break loose on Toysrus.com when “Toy Story” Aliens begin to hide throughout the site from Sunday, June 13 through Sunday, June 27. Popping up throughout the site, visitors who find these fan-favorite, three-eyed characters will receive access to a variety of content including special deals on “Toy Story 3” items and previews of fun “Toy Story” animation clips featuring the gang. Everyone who clicks on and captures an Alien will be rewarded.

Additionally, kids and parents can take the adventure onto their mobile devices beginning later this month with a downloadable “Toy Story 3” Memory game available exclusively for iPod touch and iPhone. Offering a new spin on the classic card matching game, players will be challenged to test their memorization skills by flipping over “Toy Story”-themed cards in an attempt to find a matching picture underneath. Customers interested in downloading the game will find a link to it at Toysrus.com/ToyStory.

To Infinity and Beyond – Toy Story line to launch in Toys“R”Us Stores Around the World
As “Toy Story 3” opens in theaters internationally, Toys“R”Us stores around the world will also celebrate the film’s arrival with dedicated boutiques. These special shops in the United Kingdom, Canada, France, Germany, Spain and additional countries will offer exclusive products, including U-COMMAND Buzz Lightyear, which is available only at Toys“R”Us stores worldwide.

Andy’s Favorites – Exclusive Products
In addition to the broadest assortment of toys based on the movie, kids will find dozens of unique “Toy Story 3” items available exclusively at Toys“R”Us stores and online at Toysrus.com/ToyStory. Selected highlights of the differentiated “Toy Story 3” product line include:

DisneyźPixar “Toy Story 3” U-COMMAND Buzz Lightyear from Thinkway
It’s “Buzz Lightyear to the rescue” with this fully programmable action figure. Children just take control of Buzz by using an infrared remote control to make him speak, spin around, move forward and back, move his arms and activate his laser. With 10 program buttons that can create over 1,000 action combos and the ability to control Buzz using a joystick controller, kids will think Buzz actually left Andy’s house en route to their own home. This global exclusive can only be found at Toys“R”Us stores around the world. 7 “AA” Batteries required (4 included). Ages 6 years and up.

DisneyźPixar “Toy Story 3” Interactive Buddies Woody and Jessie from Thinkway
Sheriff Woody and his pal Jessie the Yodeling Cowgirl are together again, and just like in the “Toy Story” movies, they banter and bicker with each other. With this Toys“R”Us exclusive, kids can choose between three different interactive modes to hear these pals speak individually or converse with each other, using their actual voices from the movies. Between Woody and Jessie, the duo can say over 100 phrases, including lines from “Toy Story 2” and “Toy Story 3,” along with additional buddy interactions. 3 “AA” batteries and 3 “AAA” batteries required (not included). Ages 4 years and up.

No batteries required. Ages 3 and up.

DisneyźPixar “Toy Story 3” GeoTrax Exploding Bridge RC Set from Fisher-Price
Oh, no! A dastardly villain has booby trapped the bridge, and Buzz Lightyear’s train is headed for certain peril! Now it’s up to Woody and his trusty horse, Bullseye, to save the day in this constructible train set. Featuring a remote control train, a figure-8 loop of track, an “exploding” bridge that breaks away from the track, TNT, and three figures, kids will have plenty of pretend rescues with their favorite “Toy Story” characters. 6 “AAA” batteries required (not included). Ages 2 to 7 years.

POP-O-MATIC TROUBLE Game®: DisneyźPixar “Toy Story 3” Edition from Hasbro Games
The classic race-ahead, bump-back game takes on a “Toy Story” twist as players partner with their favorite characters. Kids can either play along with Buzz Lightyear (blue), Woody (yellow), Rex (green) or MR. POTATO HEAD (red) as they race around the board in an attempt to land at home base. As always, players use the POP-O-MATIC dice roller to determine their moves, but they better watch out because if an opponent lands on them, it’s back to the start of the board. No batteries required. Ages 5 and up.

Disney/Pixar “Toy Story 3” Garbage Truck Getaway from LEGO Systems, Inc.
Kids can recreate a climactic scene from “Toy Story 3”with this 402-piece construction set containing enough pieces to build a garbage truck and dumpster. Once the four included Minifigure versions of Buzz Lightyear, Jessie, Lots-O’-Huggin’ Bear and Twitch dive into the dumpster, the truck can lift it and automatically toss the contents into the back of the truck. No batteries required. Ages 7 to 14 years.


About Disney-Pixar’s “Toy Story 3” (in U.S. theaters June 18, 2010)
“Toy Story 3” welcomes Woody (voice of Tom Hanks), Buzz (voice of Tim Allen) and the whole gang back to the big screen as Andy prepares to depart for college and his loyal toys find themselves in… day care! These untamed tots with their sticky little fingers do not play nice, so it’s all for one and one for all as plans for the great escape get underway. A few new faces—some plastic, some plush—join the adventure, including iconic swinging bachelor and Barbie’s counterpart Ken (voice of Michael Keaton), a thespian hedgehog named Mr. Pricklepants (voice of Timothy Dalton) and a pink, strawberry-scented teddy bear called Lots-o’-Huggin’ Bear (voice of Ned Beatty). Directed by Lee Unkrich (co-director of “Toy Story 2” and “Finding Nemo”), produced by Pixar veteran Darla K. Anderson ("Cars," "Monsters, Inc."), and written by Academy Award®-winning screenwriter Michael Arndt (“Little Miss Sunshine”), “Toy Story 3” is a comical new adventure in Disney Digital 3D™ and IMAX® 3D.
Image 1 of 9 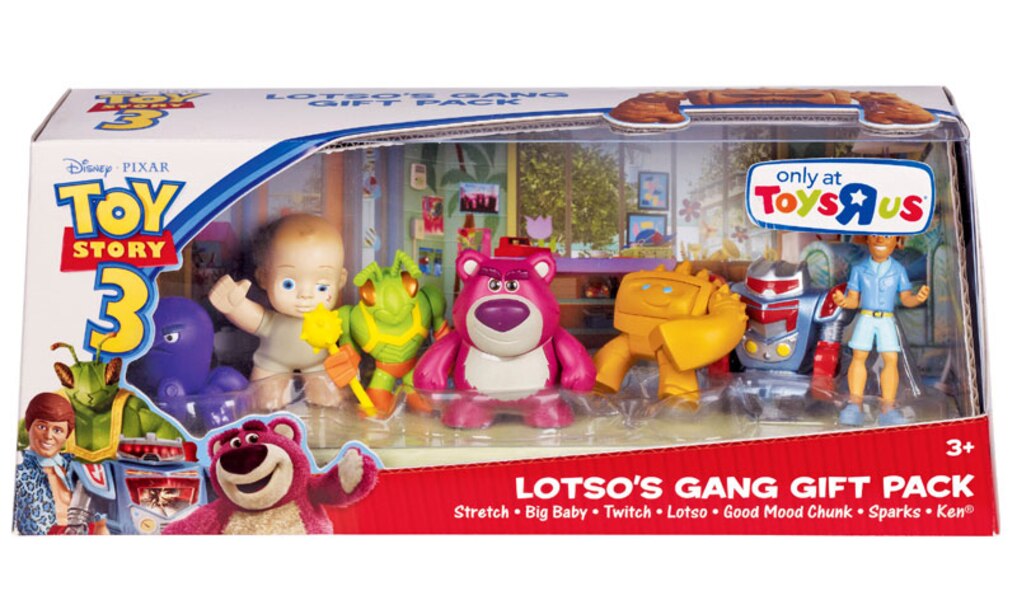 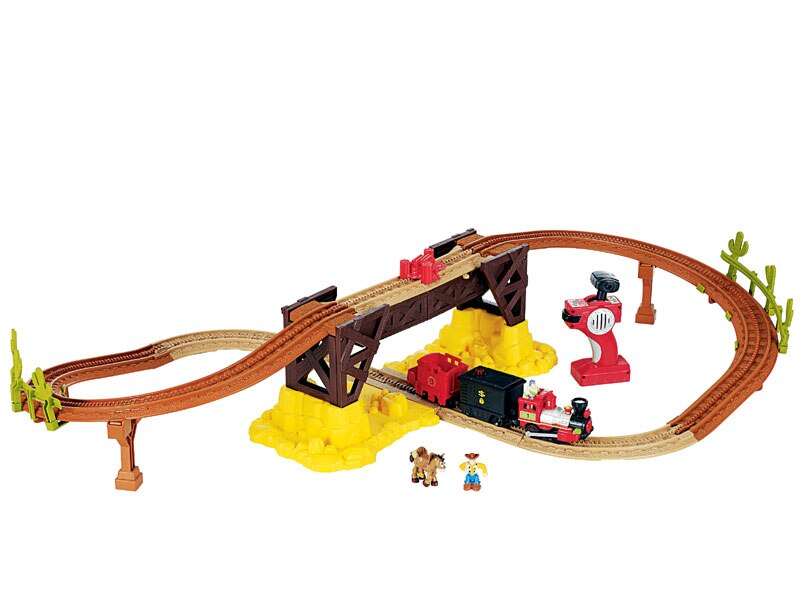 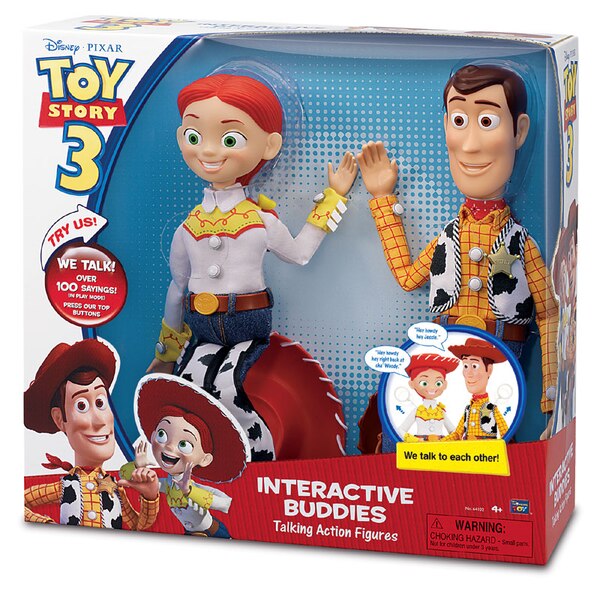 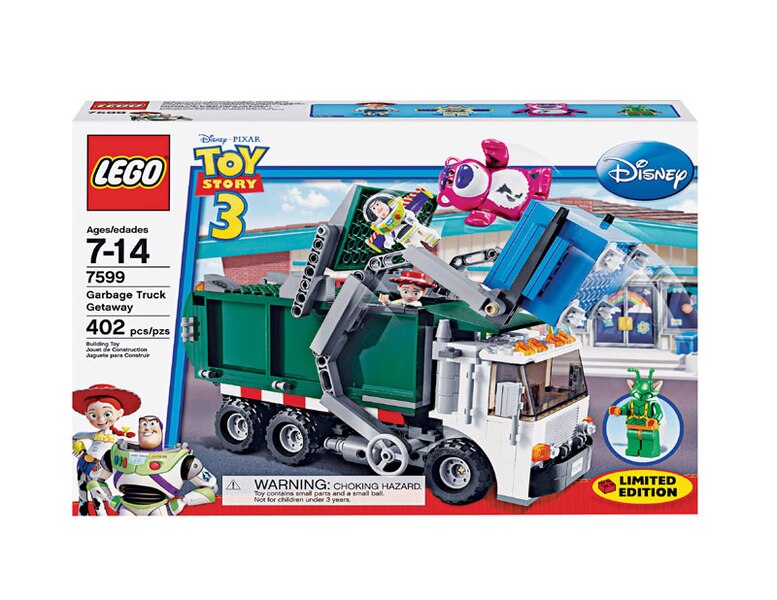 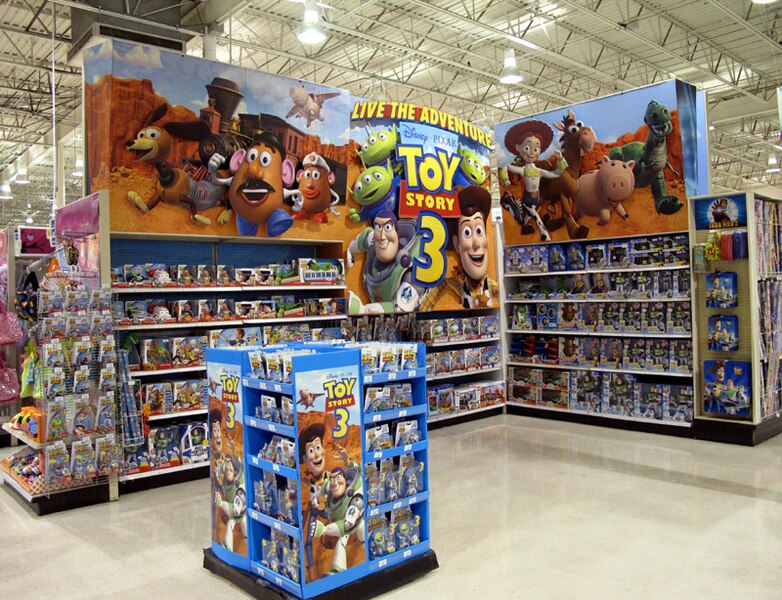 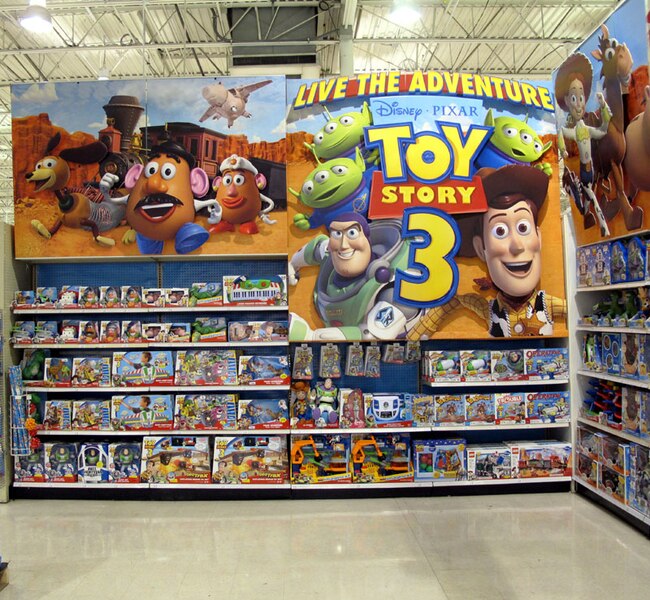 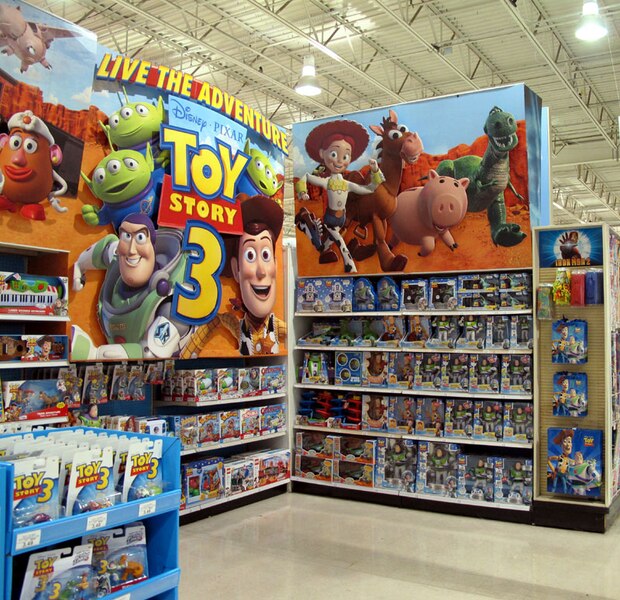 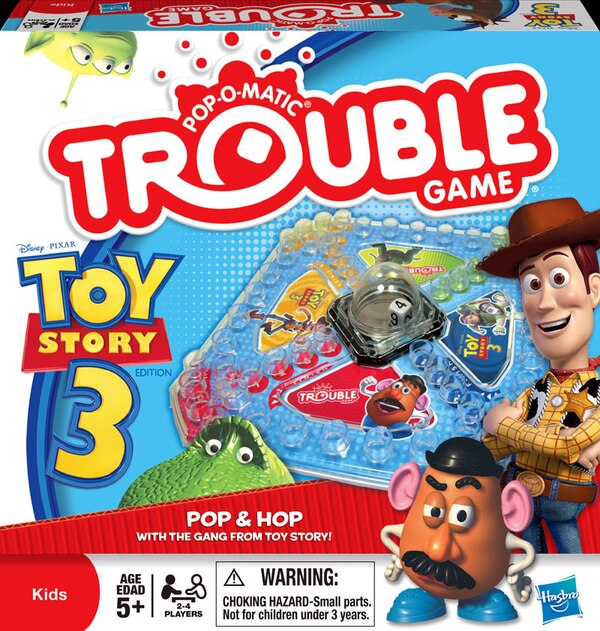 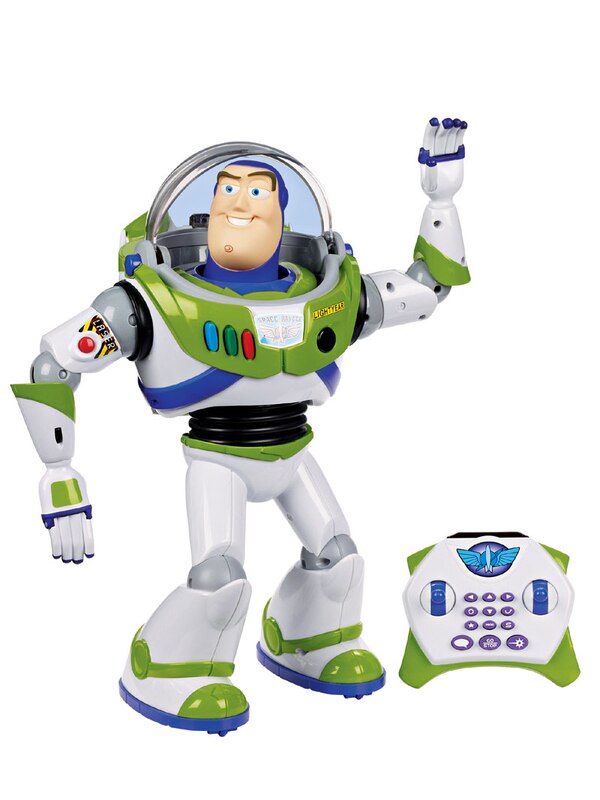