Miscellaneous
by Jay Cochran
May 28, 2014
The Team Unicorn Saturday Action Fun Hour! pilot for Adult Swim has been cast and is currently in production. Danger Maiden Productions' Clare Grant and Rileah Vanderbilt will executive produce and star alongside original Team Unicorn member Milynn Sarley (How I Met Your Mother) and Alison Haislip (Attack of the Show) as both Team Unicorn and their cartoon counterparts. Jane Lynch (Glee) voices the villainous Dark Puba, Alan Tudyk (Suburgatory) voices her sidekick, Chummy Cherub, Tara Strong (The Fairly Odd Parents) voices Billy, the boy with the ability to summon Team Unicorn, and Kevin Shinick (Mad) is the show's announcer, a staple of the cartoon shows that inspired the pilot.

Dan Milano (Greg the Bunny) wrote the pilot, a modern twist on Saturday morning-style cartoon/live action hybrid shows but Team Unicorn is definitely for adults. The Team Unicorn Saturday Action Fun Hour! explores the adventures of the four mythical unicorn heroines who masquerade as human girls. Robot Chicken creators Seth Green and Matthew Senreich serve as executive producers for Stoopid Buddy Stoodios.
Grant and Vanderbilt said, "Team Unicorn is in the spirit of Sailor Moon and The Powerpuff Girls with a sprinkling of Voltron and Josie and the Pussycats." Seth Green directs the pilot, Brian Sheesley (Dan vs.) is the animation director and Sean Becker (Holliston) is live-action director. The trio are all Emmy Award® winners, as are Lynch, Shinick, Senreich, and Milano.

Danger Maiden Productions was formed in 2009 when Grant and Vanderbilt wrote/produced and starred in the viral video Saber, which won Best Action and the Audience Awards at the Lucasfilm Fan Awards. Recently they completed the trilogy, releasing Saber III, and collectively, have racked up over 7 million views. Team Unicorn was first introduced to geek and female empowerment fans in 2010 via “G33K & G4M3R Girls”, written and produced by its original members. The viral video sensation captured a million views in its first week as a geek-centric parody of Katy Perry's “California Gurls” music video. More Team Unicorn videos followed, including Alien Beach Crashers, SuperHarmony, A Very Zombie Holiday and For the Win. Team Unicorn has become a staple at comic, SciFi and gaming conventions and panels and as a media authority on the rising popularity of women in geek-oriented media and gaming. 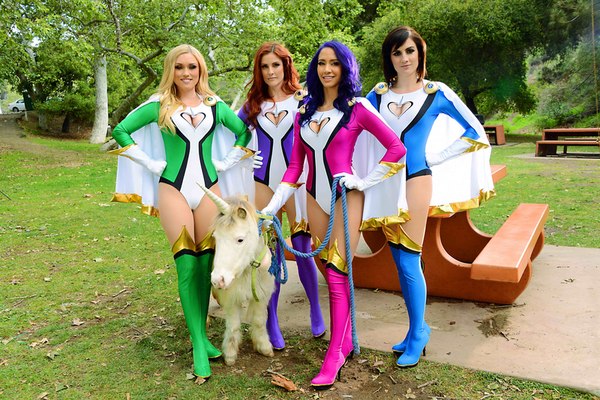