Diamond Select
by Jay Cochran
June 08, 2009
The oft-rumored return of the Battlestar Galactica Minimates line can now be confirmed, owing its resurrection to The World’s Greatest Toy Store, Toys"R"Us. The first new wave of Battlestar Galactica Minimates, featuring updated versions of fan favorites and never before seen characters, will be available this summer exclusively at Toys"R"Us stores nationwide, and online at Toysrus.com, with additional waves coming later this year.

The Battlestar Galactica Minimates line began in 2007, and during its production run, over 60 different Minimate versions of the hit series' robotic Cylons and human crew were released. However, when the line was discontinued, fans were left without several key characters featured in the later seasons of the epic sci-fi adventure - including the human-model Cylons and the Final Five survivors of Earth. In addition to all-new characters, these Toys"R"Us exclusive waves will include new versions of the show’s main cast - such as Admiral William Adama, Lt. Kara “Starbuck” Thrace and Lee “Apollo” Adama.

“We've been searching for the right partner to help continue the Battlestar Galactica Minimate line for a while, and working with Toys"R"Us on this project has been a dream come true for all of us,” remarked Chuck Terceira, Director of Diamond Select Toys & Collectibles. “The truly exciting part about this announcement is how new fans of the show will be able to experience Battlestar Galactica Minimates for the first time, while customers familiar with the original line will finally be able to complete their collections.”

The first assortment of all-new Battlestar Galactica Minimates is scheduled to arrive at Toys"R"Us stores nationwide and online at Toysrus.com beginning in June and will feature the following figures:

- John Cavill aka Number One & Tylium Mine Cylon

Each two-pack will be available for $6.99 and includes two Minimates - each standing over two inches tall, with an incredible 14 points of articulation. As always, the Minimates feature removable and interchangeable parts that unlock endless combinations, while parallel Minimate lines allow fans to combine their favorite television, movie and comic characters in one cohesive set - including characters based on Marvel Comics, Ghostbusters, Terminator 2, Star Trek, Back to the Future and more!

Further Battlestar Galactica offerings are also in the works, including a second assortment of Toys"R"Us exclusive Minimates as well as a few surprises that long-time fans of the break-out toy line will recognize. For more information about what the future holds for this growing line, please visit www.artasylum.com and www.diamondselecttoys.com.
Image 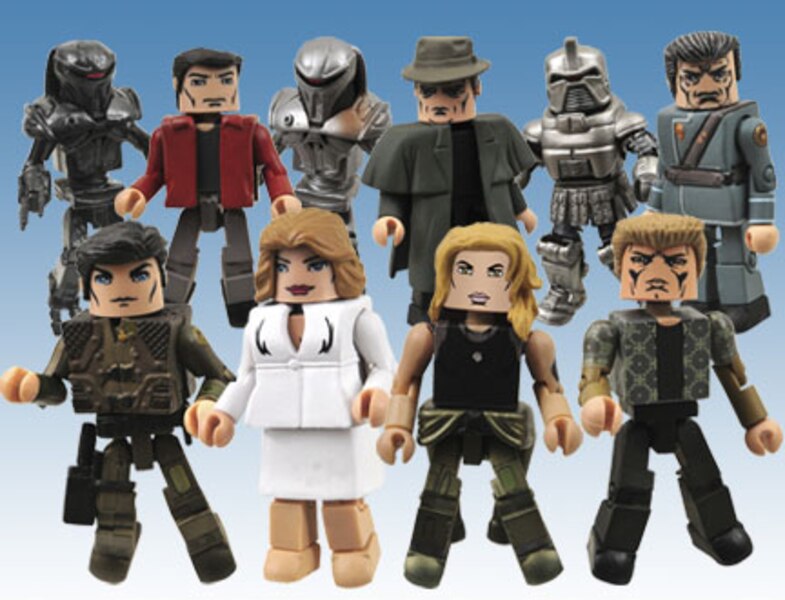 I liked them. @optimus@

Previews will also be offering an exclusive "Damaged Mk VII Viper" (w/Starbuck) and a "Scar" Cylon Raider (w/Cylon) Mini-flyers. Both are due in November.

BTW, TRU has also posted Series 2 as well as Mini-Vehicle Col. Viper and Raider on their site. I'm thrilled that these previously cancelled waves (and ships!) have finally found a home at TRU as exclusives. I will be broke as Hell amassing an armada of Vipers and Raiders! @jump#

Thank-You DST and TRU for making this happen!

I will possibly get the set with the Razor Cylon