Marvel
by Ryno
October 06, 2007
MarvelousNews.com DATABASE is updated today with the brand new Marvel Legends Fantastic Four - Ronan The Accuser Series, Click the image below for an extensive look at this new wave of Marvel Legends from Hasbro. 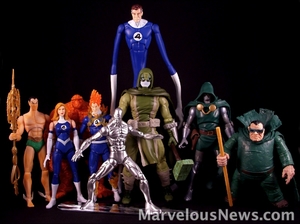 I was counting all Mole Man figures, Showdown, Old cartoon, canceled cartoon one. all of them.

this is the only mole man ml ever (not counting showndown)

I am pleased with this wave:

Silver Surfer- ugh. I actually don't like the mirror finish. and the bottom of the board doesn't look like how his board should look underneath. also, Norrin can't stay on his board good. tear in my beer.

Doom- best action figure of the year. one of the best Marvel Legends ever. this is everything you could want in a Dr. Doom action figure. I need 4 more to be converted into Doombots.

Namor- the underdog. I have NO problems with this figure, everyone. he is really underrated. I like him, a lot! the articulation doesn't even bother me, he moves in all the places he should and he looks good, too. Photos of him do NO justice. hes better in person.

The Four- Thing is too small for me, Mr. Fantastic is awesome. Torch instantly got a hair resculpt. Sue is exposing her shoulders much to my dismay. but over all they are pretty cool, I suppose.

Ronan- I own a Green Bald Thor now. but really, cool figure, though I hate the Capes in this series. all of them are flimsy and I would have loved if they had some pegs that plug into the figure (like the mommy and daddy parts of Ronan's Belt).

This is one of the best waves of Marvel legends so far, and the first in a while that I have gotten all the figures in. Doom could have been released alone and still been considered Best wave ever. the others are just bonus.

Gah! I just got back from the States 2 days ago and was looking all over the place for these... Blast. Now I'll have to wait an extra month and pay twice the price... (They look good though, looking forward to them)

Hey guys, shot some "pick-up" shots of the spider-man trilogy wave (those will be up in moments) While I was at it, I added this Silver Surfer Movie group shot, since I think he would be passable in a Movie collection along with the rest of the crew from ToyBiz' 6" Fantastic Four Movie figures (link)

Thanos0341 is the official TNI master of the stats!

Awesome Ryno! Hasbro really did a great job with this wave. My only 2 nitpicks are Johnny's "Heat mizer" hair & Surfer being sculpted on the small side. They nailed Ben's scale correctly but dropped the ball on SS.

Ronan is awesome! Can't wait to get this wave!

Dr. Doom is on the tall side, 6'7" at that. When did he grow to that size? I'll stick to the Surfer since he'll be floating in the rafters and won't be too conspicuous next to the other figures.

Marvel universe website has these stats for Doom, the figure is scale accurate!

Doom can exchange minds with others. He possesses some mystical abilities, such as casting bolts of eldritch energy and invoking mystical entities (principalities) for additional support. While empowered by the Haazareth, his mystical powers were on a par with those of Dr. Strange.

Doom is a genius in physics, robotics, cybernetics, genetics, weapons technology, bio-chemistry, and time travel. He is also self-taught in the mystic arts. Doom is a natural leader, a brilliant strategist, and a sly deceiver.

Doom wears a sophisticated nuclear-powered titanium battlesuit which grants him superhuman strength, contains jets for flight, houses a personal force field, and discharges concussive force blasts; he can also electrify his armor's surface. The armor contains a 4-hour air supply, and can be sealed for travel into outer space or underwater. Special attachments to the armor have included a molecular-expander, which can cause molecules to expand into the size of boulders, and various devices for absorbing the energies of others (such as the Silver Surfer).

well I hate that darned back ground color but you know that already :D

Great reviews and pics though I think you covered just about everything once again!

:D If not for the scared face it could so look like him too

I was thinking about the same thing too. Doom reminds me a lot of Robocop

Awesome Ryno! Hasbro really did a great job with this wave. My only 2 nitpicks are Johnny's "Heat mizer" hair & Surfer being sculpted on the small side. They nailed Ben's scale correctly but dropped the ball on SS.

Ronan is awesome! Can't wait to get this wave!

Dr. Doom is on the tall side, 6'7" at that. When did he grow to that size? I'll stick to the Surfer since he'll be floating in the rafters and won't be too conspicuous next to the other figures.

Okay, so these figures are all over the place now, yet Hasbro can't stock them on their website?? C'mon, Hasbro. Either be a legitimate e-tailer or just give it up. Enough with minimally stocking your figures online--when you stock them at all. For pete's sake, they're STILL out of HML2 Thor.