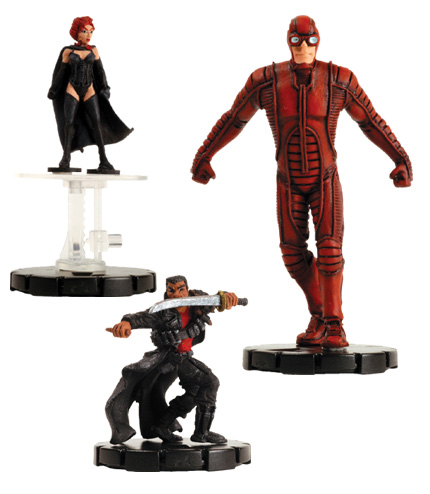 Marvel HeroClix: Mutant Mayhem mixes heroes and villains from different times, dimensions, and worlds across the Marvel universe. The set includes 97 characters, including the debuts of teams like the Reavers™, the Marauders™, and Alpha Flight™. Mutant Mayhem also introduces three new HeroClix game pieces: feat cards, which convey additional powers and abilities; battlefield condition cards, which affect the environment in which figures fight; and bystander tokens, which feature some of the most popular supporting characters in the Marvel universe.

There is also a Ultimates Giant Man - this is a double sized "Bat-Sentry" size figure that comes 1 per case.

And a mail-away ($5) translucent green Hulk from Wizard/Inquest magazine.

Thanks to TNI reader Superfriend for the heads up.