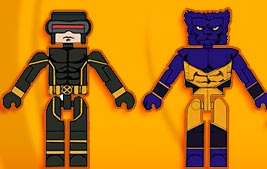 Fans of DST’s Marvel Minimate universe will be pleased to know that the long-awaited Series 12 and 13 are heading to fans this year! Both waves will feature masterful Art Asylum designs as well as tie in to the hottest Marvel comics; New Avengers and Astonishing X-Men!

Series 12 will contain several twopacks featuring characters taken from the ongoing New Avengers series currently tearing up the best-seller charts. Riot-Attack Spider-Man will be paired with Ronin, Captain America will team up with Nick Fury and the Sentry will take on Luke Cage in this all-star New Avengers lineup. An Imprisoned Sentry will also be available as the limited chase figure.

With the ongoing success of Asonishing X-Men, it was only a matter of time before they got their due as Minimates! Series 13 will create the entire Astonishing X-Men team in their current costumes and will feature twopacks consisting of Cyclops and Emma Frost, Wolverine and Colossus and the all-new Kitty Pryde and Beast set! A limited Days of Future Past Wolverine will round out this wave, sure to strike a chord with collectors.

With fans clamoring for more characters and plans ramping up to continue the Minimate line well into the future, be sure to stick around for more updates as the spring and summer trade shows approach!