Toy Fair
by Jay Cochran
February 11, 2011
Activision Publishing, Inc. announced today the worldwide debut of Skylanders Spyro's Adventure , an entertainment breakthrough for the toy and video game industries. Through an innovative use of technology, the game allows players to transport real-world toys into virtual worlds of adventure through the "Portal of Power." These "toys with brains" can come to life inside the game in connection with multiple gaming platforms, as well as on handheld gaming devices, mobile devices and on the web, remembering achievements and level-ups wherever they go. This marks a wholesale change in the interaction between toys and video games, opening up new possibilities and revenue streams for both industries.

"These are more than action figures. They are inter-action figures," said Eric Hirshberg, CEO of Activision Publishing. "By pairing world class character design, world class video game design and world class story telling into one entertainment experience, we've given players a whole new genre that bridges the gap between the real and virtual worlds. From the first time a kid picked up a stick and pretended it was a sword, toys have unlocked kids' imaginations. And how often have you wanted to bring those toys to life, to see them become animated and take them on an adventure? Skylanders Spyro's Adventure does just that."

This new interactive experience will make its worldwide debut and be available for demos at the American International Toy Fair (Booth #3055), which takes place February 13 – 16 at the Jacob Javits Convention Center in New York City.

Activision brought its gaming expertise together with top Hollywood creative talent to bring Skylanders Spyro's Adventure to life. The game and technology was developed by Activision's Novato, California studio, Toys for Bob, led by creative director and studio head, Paul Reiche. The adventure driven story was penned by two of the Academy Award nominated writers of the original Toy Story movie, Alek Sokolow and Joel Cohen. The result is a line of highly collectible characters, an engaging story, and an immersive interactive entertainment experience.

There are many unique and innovative elements to this experience, including:

* Each Character Has its Own Unique Powers – In addition to the highly collectible design and personalities of the toys themselves, each character has different powers and abilities, opening different experiences inside the game. Players can drop in and out of each level with as many different characters as they like, making each players experience unique.

* Toys With Brains – Each toy/character remembers the player's shared experiences. Achievements and leveled up capabilities earned in the game are embedded inside the toy and travel with the toy. Wherever the toy goes, its experiences go with it.

* Play With Friends – By placing two characters on the Portal of Power at once, players can team up together for cooperative play, or face off in player versus player battle arenas utilizing their leveled up characters.

To support the launch of the game, Toys "R" Us will join forces with Activision for a global marketing partnership in which stores across the globe will feature several Skylanders Spyro's Adventure exclusives this fall.

"We began discussing this concept with Activision and immediately knew merging the world of toys and video games together in Skylanders Spyro's Adventure would capture the imagination of a wide range of consumers, including kids, toy collectors and video game enthusiasts," said Jerry Storch, Chairman and CEO, Toys"R"Us, Inc. "We believe this product line is among the most exciting and unique offerings that will be seen at Toy Fair this year, and we are excited to partner with Activision to bring Skylanders Spyro's Adventure to Toys"R"Us stores this fall."

Skylanders Spyro's Adventure lets kids take on the role of a powerful Portal Master, who can control over 30 different characters, including the beloved purple dragon Spyro. Each of these heroes is a protector of an amazing, mysterious world, but they have been ejected from their world by the sinister Portal Master known as Kaos and now they are frozen in our world as toys. Only the players of Skylanders Spyro's Adventure can get them back into their world, by embarking on a fantastical journey where they will explore mythical lands, battle menacing, outlandish creatures, collect treasures, and solve challenging puzzles as a part of the quest to save their world.

Skylanders Spyro's Adventure is developed by Toys For Bob, an Activision studio located in Novato, California. The game is not yet rated by the ESRB. For more information, visit www.skylandersgame.com

Be sure to let us know what you think of this new product below in our comment section and stay-tuned to TNI thoughout the week for more coverage on this and other products from the 2011 New York Toy Fair.
Image 1 of 4 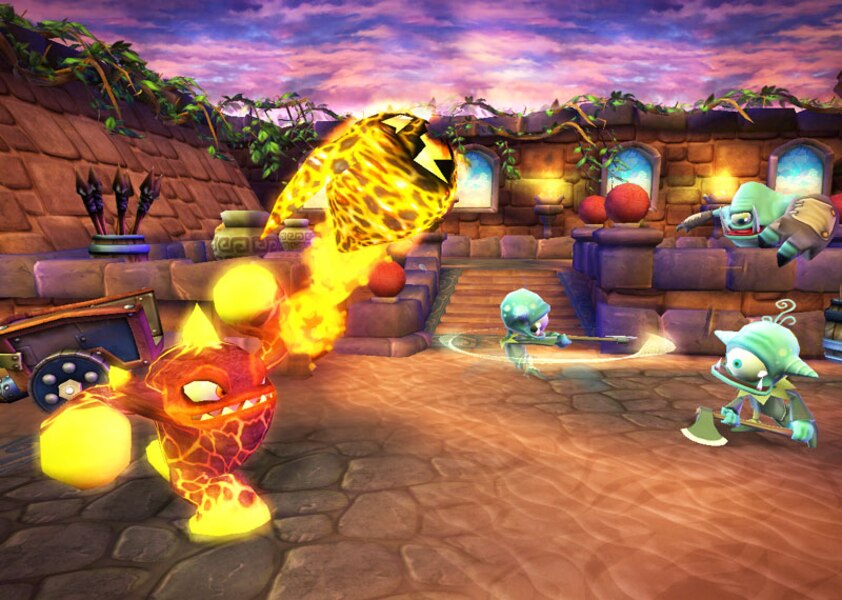 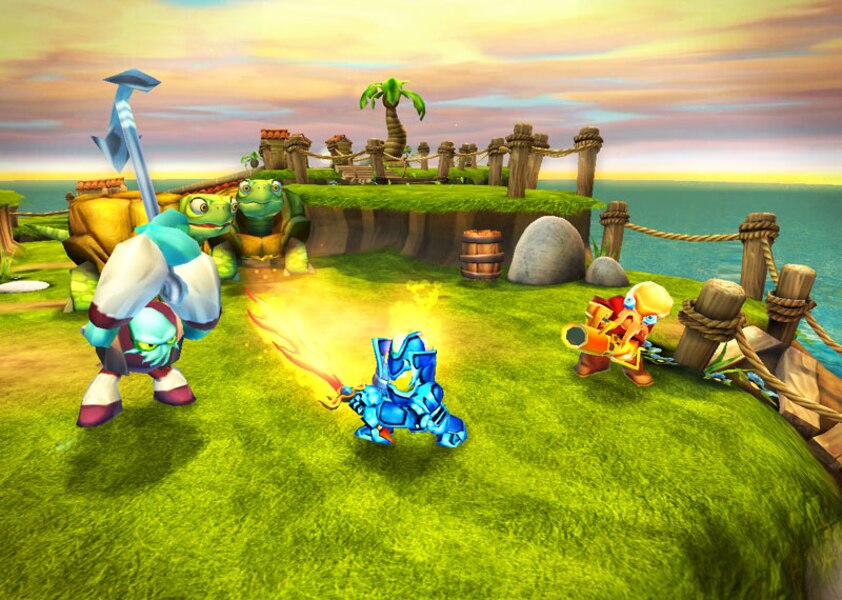 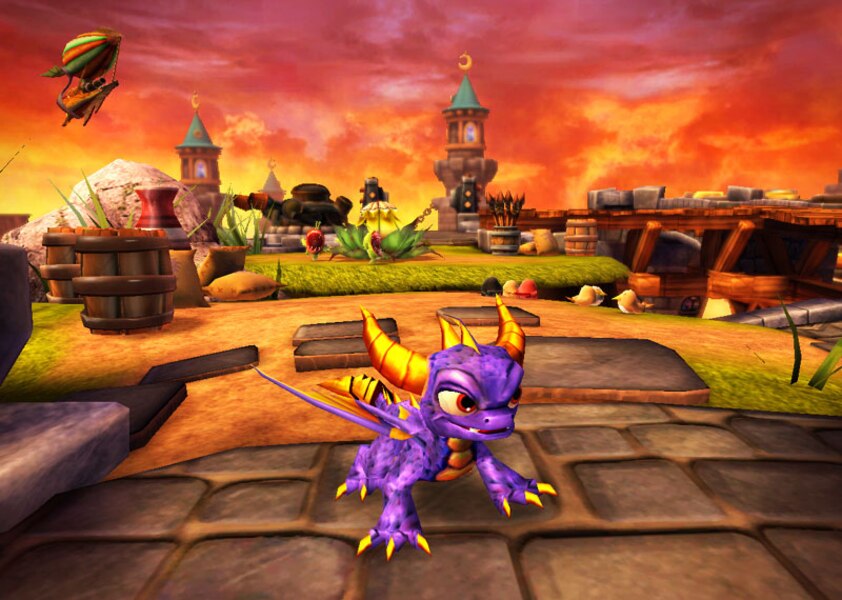 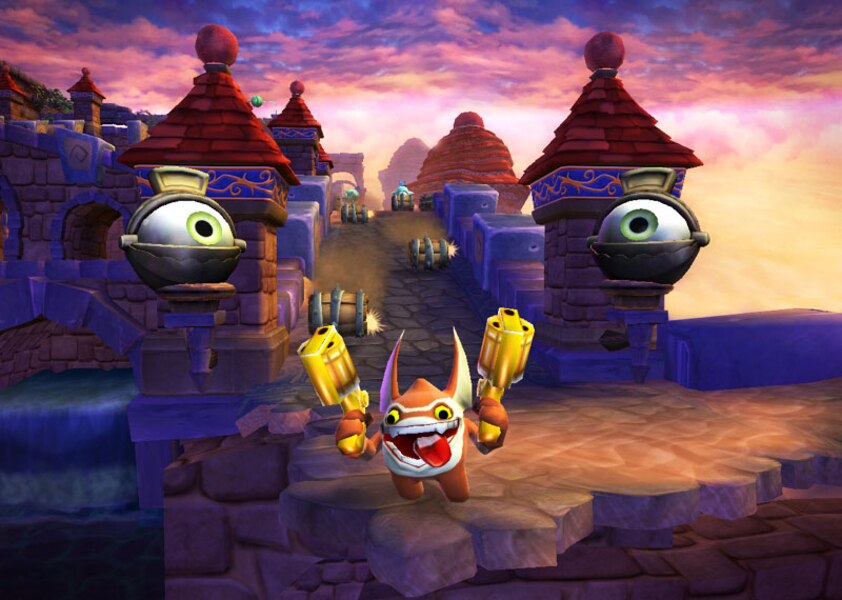