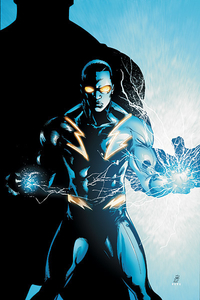 UPDATE: TVLine is reporting that the CW has confirmed that it has indeed picked Black Lightning up to pilot.

In September, we reported that FOX had picked up Black Lightning with a pilot production commitment but the project is now being shopped around to other network including the CW as the main network to pick up the project.

FOX has decided to go against the pilot production commitment after deciding that the superhero show was not a good fit into its already crowded genre drama space that includes the DC/WBTV series Gotham and Lucifer, Seth MacFarlane’s upcoming space dramedy, and two pilots: the X-Men-themed drama written by Matt Nix and The Passage; all are from 20th TV.

The Black Lightning project comes from Greg Berlanti, who has partnered with Mara Brock Akil and her husband Salim Akil. Greg Berlanti and his Berlanti Prods. are behind all WBTV superhero series on the CW, DC’s Supergirl, Arrow, The Flash and Legends Of Tomorrow, which Berlanti also co-created, as well as the upcoming Archie Comics adaptation Riverdale.

The drama series is based on the DC character created by Tony Isabella with Trevor Von Eeden. Black Lightning centers on Jefferson Pierce. He made his choice: He hung up the suit and his secret identity years ago, but with a daughter hellbent on justice and a star student being recruited by a local gang, he’ll be pulled back into the fight as the wanted vigilante and DC legend Black Lightning.