Batwoman Joining The Arrow-Verse Next Season 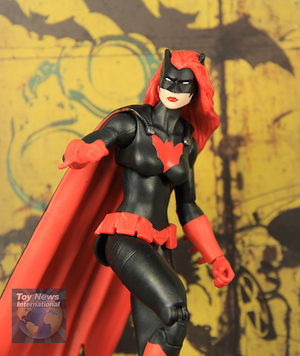 It was announced at the CW Upfronts this week by the network's President Mark Pedowitz that the character of Batwoman would be making an appearance next season during the CW DCTV yearly crossover event in December. This in turn will also introduce the city of Gotham (Not the Fox series) to the likes of Arrow, Flash and Supergirl.

In the comics Batwoman (not to be mistaken with Batgirl) is a wealthy heiress similar to Bruce Wayne who was inspired by Batman to dawn a black and red batsuit and fight crime. The character's real name is Katherine Kane. Back in 2006 when the modern version of the character was first introduced to readers, it was made to be a big deal that she was a lesbian. Of course in this day and age that is not really something that stands out anymore, in fact the CW DCTV Universe already features several lesiban characters in key roles with Supergirl's sister and White Canary who is the current leader of the DC Legends Of Tomorrow team. The two even hooked up for a one-night stand in last year's DCTV crossover.

No details on who will be playing the character of Batwoman or if this means we will see an eventual appearance by Batman himself, but at least the possibility is there.