Entertainment
by Outsiders
July 01, 2019
Things are about to get weird! Get ready for nonstop action as the world’s favorite misfit DC Super Heroes are about to enter our universe with the release of Doom Patrol: The Complete First Season on Blu-ray and DVD on October 1, 2019 from Warner Bros. Home Entertainment. Strap yourself in for an exhilarating ride with all 15 episodes from the first season of the DC UNIVERSE original series, plus enjoy the captivating extra features including gag reel and deleted scenes. Doom Patrol: The Complete First Season is priced to own at $24.98 SRP for the DVD ($30.99 in Canada) and $29.98 SRP for the Blu-ray ($39.99 in Canada), which includes a Digital Copy (U.S. only). Both sets have an order due date of August 27, 2019. Doom Patrol: The Complete First Season is also available to own on Digital via purchase from digital retailers (available on August 26th in the U.S.).

Following the mysterious disappearance of their leader, Dr. Niles Caulder (“The Chief”), these reluctant heroes will find themselves in a place they never expected to be, called to action by none other than Cyborg, who comes to them with a mission hard to refuse. Part support group, part Super Hero team, the Doom Patrol is a band of superpowered freaks who fight for a world that wants nothing to do with them.

“In only its first season, the critically acclaimed series has received a 95% certified fresh rating and scored an 8 out of 10 on RottenTomatoes.com – and continues to gain momentum,” said Rosemary Markson, WBHEG Senior Vice President, TV Marketing. “Now is the time to join in on the investigation of the world’s weirdest phenomena with these unique DC Super Heroes. We are excited to make this outstanding first season available on all formats – Digital, Blu-ray and DVD – for fans and newcomers to enjoy along with a never-before-seen gag reel!”

With Blu-ray’s unsurpassed picture and sound, Doom Patrol: The Complete First Season will be released in 1080p Full HD Video with DTS-HD Master Audio for English 5.1. The 2-disc Blu-ray will feature a high-definition Blu-ray and a Digital Copy of all 15 episodes from season one (available in the U.S.).

The first season of Doom Patrol will be available to own on Digital on August 26th (in the U.S.). Digital allows consumers to instantly stream and download all episodes to watch anywhere and anytime on their favorite devices. Digital is available from various retailers including Apple TV, Amazon Video, Google Play, Vudu, PlayStation, Xbox and others. A Digital Copy is also included in the U.S. with the purchase of specially marked Blu-ray discs for redemption and cloud storage. 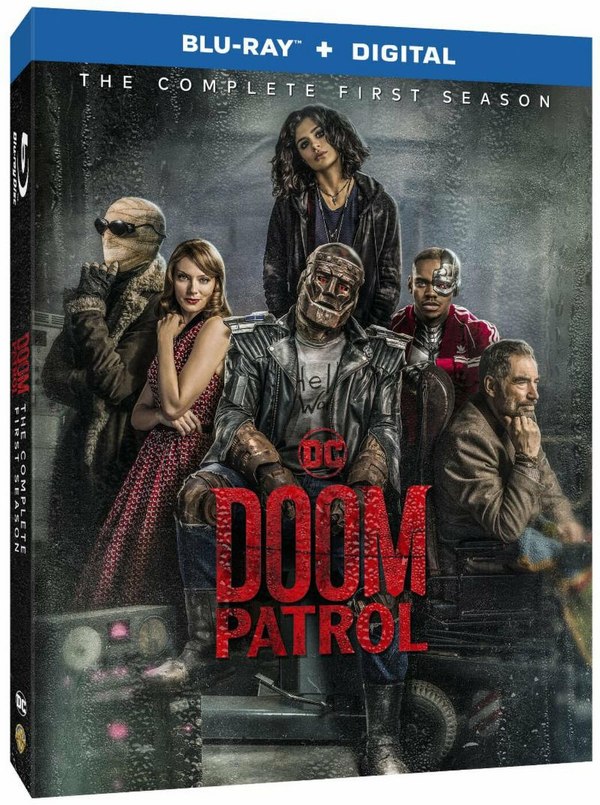 I would have liked to watch this and the new teen titans, but haven't took the time to get acclimated to this streaming stuff. I wonder if the dvd is worth it?

Ive really surprisingly enjoyed both Titans AND Doom Patrol and I went into both thinking i would hate them. Im very excited for the next seasons already and they still have a while to go.. at least with doom patrol. I think Titans is coming fairly soon.

I would have liked to watch this and the new teen titans, but haven't took the time to get acclimated to this streaming stuff. I wonder if the dvd is worth it?